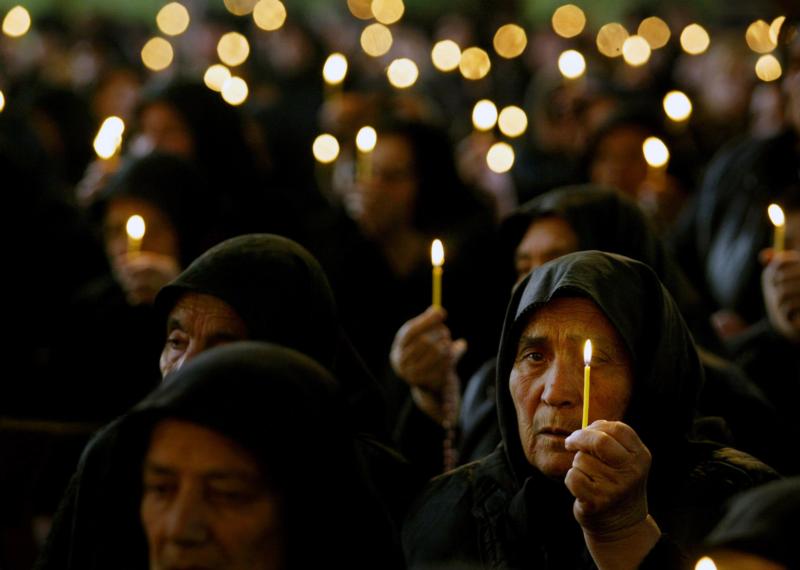 In this 2005 file photo, Bulgarian Catholic worshippers in Rakovski hold candles to mourn the death of St. John Paul II. Pope Francis is scheduled to travel to Bulgaria May 5-7 and North Macedonia May 7. (CNS photo/Stoyan Nenov, Reuters)

VATICAN CITY (CNS) — Pope Francis will take part in several interreligious events as well as a visit to a refugee camp and a meeting with the poor in St. Teresa of Kolkata’s hometown during a three-day visit to the Balkans.

The pope is scheduled to travel to Bulgaria May 5-7 and North Macedonia May 7.

During his visit, the pope will also celebrate the first Communion of a group of children in Rakovski — the city with the largest number of Catholics in Bulgaria, which is predominately Orthodox. Catholics make up less than 1 percent of Bulgaria’s more than 7 million people.

The visit includes meetings with government authorities as well as Orthodox and other religious leaders. He will also participate in an ecumenical prayer service in Bulgaria’s capital, Sofia.

The Republic of North Macedonia is about 64 percent Orthodox, 33 percent Muslim and less than half of 1 percent are Catholic or belong to other Christian denominations.

Pope Francis will make history as the first pope to visit North Macedonia, which declared independence from the former Yugoslavia in 1991.

On the final day of his trip, the pope will meet with poor people in the Macedonian capital, Skopje, which is the birthplace of St. Teresa of Kolkata.

The motto for the trip to Bulgaria is “Pacem in Terris” (Peace on Earth), the title of a 1963 encyclical by St. John XXIII, who served in Bulgaria 1925-35 as a Vatican diplomat, and the prayer for peace Pope Francis will make during the trip, the Vatican said.

“Do not be afraid any longer, little flock” from Luke 12:32 was chosen as the theme for the visit to North Macedonia. The logo for the trip features red and gold, the colors of the nation’s flag, and three blue stripes bordering the bottom to echo the blue stripes of Mother Teresa’s white sari.

The Vatican released the following schedule March 7, leaving out the exact times for many events. Times listed are local, with Eastern Daylight Time in parentheses.

— Welcoming ceremony on the square outside the presidential palace.

— Courtesy visit with President Rumen Radev in the presidential palace.

— Private prayer before the Throne of Sts. Cyril and Methodius at the Patriarchal Cathedral of St. Alexander Nevsky.

— Celebration of Mass with first Communion at the Church of the Sacred Heart. Homily by pope.

— Lunch with bishops of Bulgaria at the Convent of the Franciscan Sisters.

— Meeting with the Catholic community at the Church of St. Michael the Archangel. Speech by pope.

— Prayer for peace with Bulgarian representatives of various religious faiths at Nezavisimost Square. Prayer by pope.

— Welcoming ceremony in the courtyard of the Presidential Palace.

— Courtesy visit with President Gjorge Ivanov of North Macedonia at the Presidential Palace.

— Meeting with Prime Minister Zoran Zaev at the presidential palace.

— Meeting with government authorities, civic leaders and the diplomatic corps in the Mosaic Hall of the presidential palace. Speech by pope.

— Visit to the Mother Teresa Memorial with religious leaders and meeting with the poor. Prayer by pope.

— Celebration of Mass at Macedonia Square. Homily by pope.

— Ecumenical and interreligious meeting with young people at pastoral center. Speech by pope.

— Meeting with priests, religious men and women and their families at the cathedral of Skopje. Speech by pope.