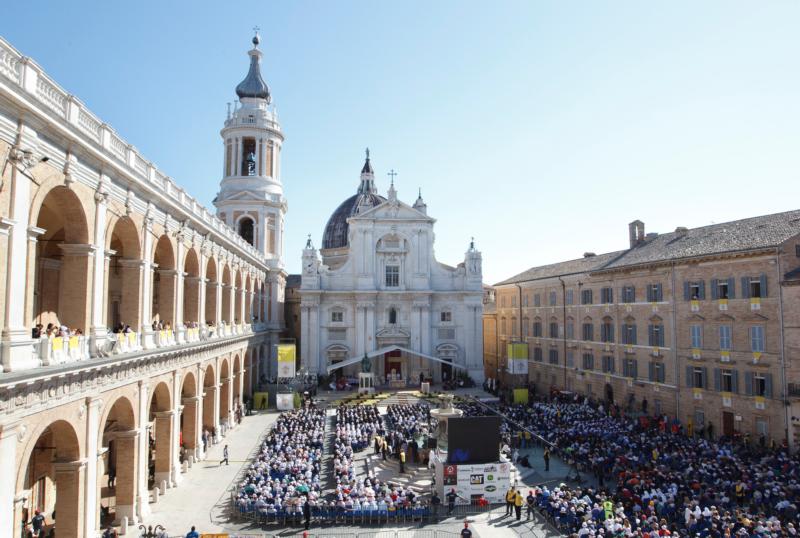 Pope Benedict XVI celebrates Mass outside the Sanctuary of the Holy House in Loreto, Italy, Oct. 4, 2012. The small house inside the basilica is traditionally venerated as the house of Mary, miraculously transplanted from the Holy Land. (CNS photo/Paul Haring)

VATICAN CITY (CNS) — The place Pope Francis chose to sign his letter to young people is an important and popular sanctuary housing the Holy House of Loreto.

According to tradition, the tiny stone house is considered to be the home where the Mary was born and raised and also the house in which the Holy Family was thought to live when Jesus was a boy. It also is held to be the place where Mary received the angel’s annunciation and conceived the Son of God through the Holy Spirit.

With his visit, the pope will encourage young people and pray that Mary “takes them by the hand and guides them with joy” to their own generous declaration of “Here I am, the servant of the Lord; may it be done to me according to your word,” Archbishop Fabio Dal Cin of Loreto told Vatican News March 21.

By signing a document based on a synod’s discussions about young people, faith and vocational discernment, the pope also is making a symbolic gesture, connecting the place venerated to be the home of “a very special family” with all the world’s families and the family of the universal church, the archbishop said in a video interview posted on the sanctuary’s website, www.santuarioloreto.it.

The pope will sign the document in the basilica housing the shrine March 25, the feast of the Annunciation. The Vatican announced March 20 that the postsynodal apostolic exhortation — titled in Spanish, “Vive Cristo, esperanza nuestra,” (“Christ, Our Hope, Lives”) — would not be made public until a later date.

The gesture at the sanctuary, like the document itself, is a renewed call to focus on “accompanying the younger generations,” Archbishop Dal Cin told Vatican News.

This reflects a similar historic visit, he said, when St. John XXIII went to the shrine of Loreto in 1962 to entrust to Mary the Second Vatican Council, which began a week later.

In Loreto, St. John prayed that Mary, “as ‘Help of Bishops,’ to intercede for me as bishop of Rome and for all the bishops of the world, to obtain for us the grace to enter the council … with one heart, one heartbeat of love for Christ and for souls.” 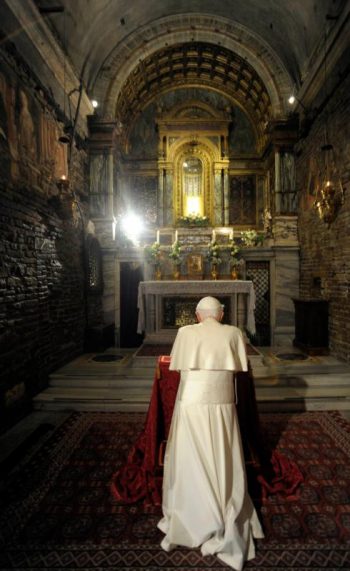 On the 50th anniversary of St. John’s visit to Loreto, Pope Benedict XVI visited the shrine in 2012 to entrust to Mary the Year of Faith, which began a week later, and the Synod of Bishops on the new evangelization.

Archbishop Dal Cin said Pope Francis entrusting to Mary the letter to young people at the same shrine shows a similar desire that she help the world’s bishops so the document would have a fruitful pastoral outcome.

Millions of people visit Italy’s most important Marian shrine each year. It was even popular with St. John Paul II, who went to this eastern seaside town five times during his pontificate.

The small house, which is surrounded by a large, intricately carved marble structure inside the main basilica, is actually made of three stone walls. The shrine’s caretakers say research has shown the brown and tan stones came from Palestine. The stones, now smooth from the touch of centuries of pious hands, were hand cut in the shape of bricks — a technique used by the Nabatei tribe, which was then also present in Palestine.

According to tradition, the Holy House was carried by angels from Nazareth, Israel, to this hillside town the night of Dec. 9-10, 1294, after making a three-year stop in Croatia. The shrine’s custodians say the stones were actually removed from the Holy Land and carried by ship by a member of the Angeli family.