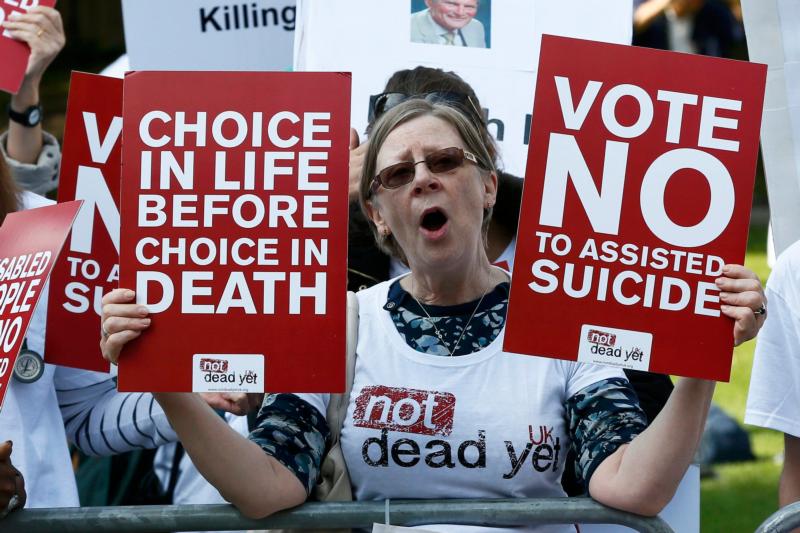 A demonstrator against assisted suicide joins a protest outside Parliament in London Sept. 11, 2015. On March 21, the professional body for doctors in the U.K. dropped its traditional opposition to assisted suicide, in spite of a poll that found that a majority of its members remain opposed to the practice. (CNS photo/Stefan Wermuth, Reuters)

UPDATED – MANCHESTER, England (CNS) — The professional body for doctors in the U.K. dropped its traditional opposition to assisted suicide, despite a poll that found a majority of its members remain opposed to the practice.

The Royal College of Physicians declared it has adopted a policy of neutrality, although a majority of doctors said they were against assisted suicide.

In a March 21 statement published on the college’s website, Andrew Goddard, college president, said: “Adopting a neutral position will mean that we can reflect the differing opinions among our membership. Neutral means the RCP neither supports nor opposes a change in the law.”

A poll of members conducted between Feb. 5 and March 1 found that 31.6 percent were in favor of the college adopting a pro-assisted suicide policy, while 43.4 percent were opposed and 25 percent were neutral.

A question asking doctors if they would also like to see British law changed to allow assisted suicide was answered affirmatively by 40.5 percent, while 49.1 percent opposed a law change and 10.4 percent were undecided.

The college decided in advance that it would adopt a neutral policy unless a supra-majority of more than 60 percent of doctors voted for or against assisted suicide.

In a March 26 statement emailed to Catholic News Service, Auxiliary Bishop John Sherrington of Westminster said the bishops of England and Wales were “disappointed” by the decision of the college to declare itself neutral.

He said that, in 2015, Parliament “voted overwhelmingly to reject assisted dying, recognizing that it is important to protect persons who are vulnerable.”

“Moreover, the British Medical Association continues to oppose assisted dying, saying its ‘focus remains on improving the standard of palliative care available for patients, through calling for greater investment and support to enable staff to deliver the highest quality end-of-life care,'” he said, speaking on behalf of the bishops.

“We support the BMA’s position and call for increased investment in good palliative care, which supports the dying persons in all dimensions of life for a good death, including the spiritual meaning of life,” Bishop Sherrington added.

Four doctors, including two Catholics, had applied to Britain’s High Court for a judicial review of the way the poll was conducted but were told March 21 that their legal challenge would not be accepted.

In a March 21 statement sent by email to Catholic News Service, the four said: “We were disappointed not to receive permission today to challenge the decision of the college in the High Court on technical grounds.”

“Sick and vulnerable people are at risk as a result of college neutrality on assisted suicide,” they added. “The profession has not moved on this issue, so neither should the college.”