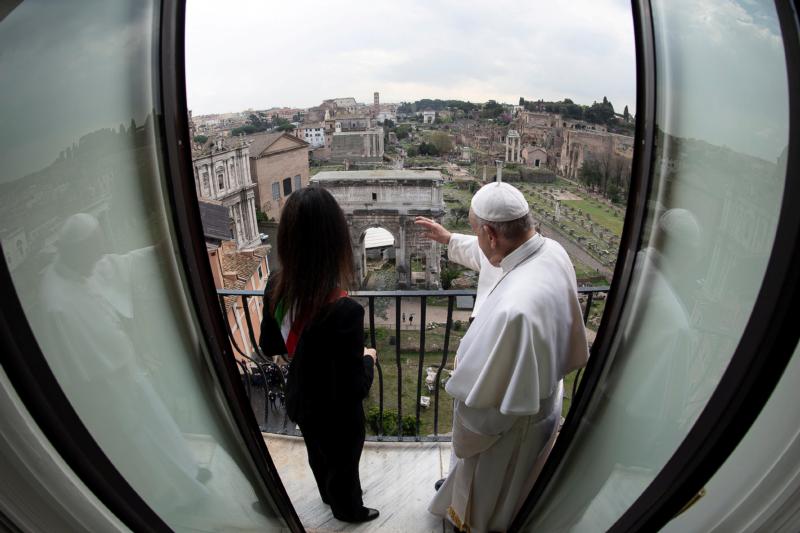 Pope Francis waves from a balcony alongside Rome Mayor Virginia Raggi during a visit to City Hall March 26, 2019. (CNS photo/Vatican Media via Reuters)

VATICAN CITY (CNS) — As the capital of Italy and center of Catholicism, the city of Rome must work with the Catholic Church to preserve and defend its rich historical and spiritual traditions, Pope Francis said.

Throughout its nearly 3,000-year history, Rome also has become a symbol for the world of the universal call to “welcome and integrate different populations and people from all over the world,” the pope said March 26 during a visit to Rome’s City Hall.

Rome “has a universal vocation, it is the bearer of a mission and an ideal capable of crossing mountains and seas and being proclaimed to everyone, near and far, whatever people they belong to, whatever language they speak and whatever the color of their skin,” he said.

Making his morning visit to Rome’s Capitoline Hill, the pope was welcomed by Mayor Virginia Raggi to the city’s administrative offices overlooking the ancient ruins of the Roman Forum.

Once the site of gladiatorial spectacles, processions and public discourses, the Capitoline Hill now serves as the beating heart of Rome’s city administration. After introducing her husband, Andrea Severini, and her son to the pope, Raggi escorted Pope Francis to the balcony of her office with a clear view of the Forum, the vestiges of Rome’s ancient glory.

After meeting privately with the mayor, the pope was welcomed by Rome’s City Hall officials with a warm applause.

In his address, Pope Francis thanked the mayor and city officials for their continued collaboration in organizing the myriad events that attract pilgrims from around the world to the heart of Christendom, including the Extraordinary Jubilee Year of Mercy.

Rome, he said, has had the unique distinction not only of inspiring Western civilization through its developments in civil law, but also inspiring Christians who visit the city and are moved by the witness of countless martyrs who gave their lives for Christ.

The martyrs, especially Sts. Peter and Paul, “have contributed to giving the city a new face” that continues to shine today through Rome’s monuments, art work, churches and its people, the pope said.

“The ‘Eternal City’ is like an enormous treasure chest of spiritual, historical-artistic and institutional treasures, and at the same time it is the place inhabited by about 3 million people who work here, study, pray, meet and carry on their personal and family history, and together are the honor and the endeavor of every administrator, of anyone who works for the common good of the city,” he said.

He also conveyed the Vatican’s commitment in helping to ensure that Rome’s splendor “will not be degraded” and that it continues to be “a beacon of civilization.”

“Rome demands and deserves everyone’s active, wise, generous collaboration,” the pope said. “It deserves that both private citizens and social forces and public institutions, the Catholic Church and other religious communities, all place themselves at the service of the good of the city and of the people who live there, especially those who for whatever reason are on the margins, almost discarded and forgotten or who experience the suffering of illness, abandonment or loneliness.”

After his speech, the pope also greeted city employees and their families, as well as Roman citizens gathered in the Capitoline Square.

Greeting hundreds of people outside, standing around the famous statue of the Roman emperor Marcus Aurelius, Pope Francis said that Romans, both believers and nonbelievers, are “in the heart of the pope,” and he encouraged all citizens to work together and “care for one another.”

In this way, the pope said, “you embody in yourselves the most beautiful values of this city: a united community, living in harmony, acting not only for justice, but in a spirit of justice.”