Pope: World in need of ‘ecological conversion’ to advance sustainability 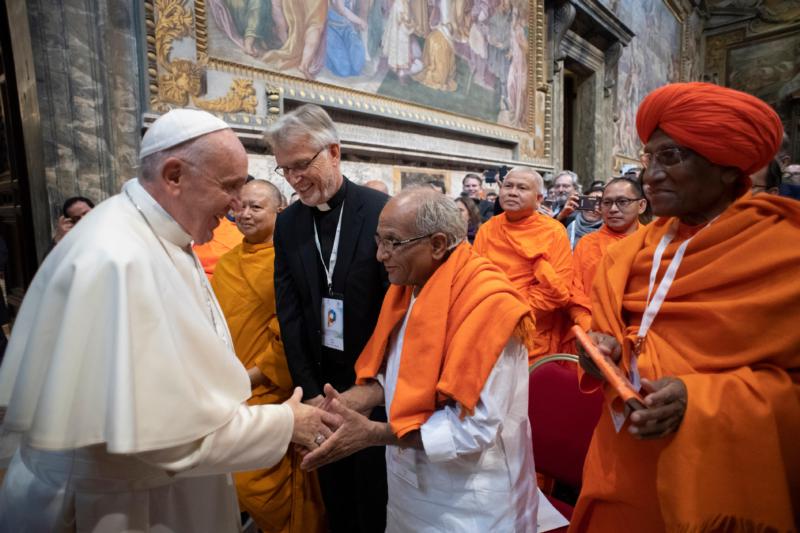 Pope Francis meets March 8, 2019, at the Vatican with representatives of the world’s religious traditions and experts in the fields of development, the environment and health care. The group was meeting at the Vatican March 7-9 to discuss the contributions religions can make to achieving the U.N. Sustainable Development Goals in a way that responds to the needs of the poor and respects the environment. (CNS photo/Vatican Media)

VATICAN CITY (CNS) — Sustainable development cannot be achieved without the voices of those effected by the exploitation of the earth’s resources, especially the poor, migrants, indigenous people and young men and women, Pope Francis told participants at a Vatican conference on sustainable development.

Without a change of attitude that focuses on the well-being of the planet and its inhabitants, efforts to achieve the U.N.’s sustainable development goals will not be “sufficient for a fair and sustainable world order,” the pope said March 8.

“Already, St. John Paul II spoke about the need to ‘encourage and support the ecological conversion,'” he said.

“Religions have a key role to play in this,” the pope said. “For a correct shift toward a sustainable future, we must recognize our errors, sins, faults and failures, which leads to a heartfelt repentance and desire to change; in this way, we will be reconciled with others, with creation and with the Creator.”

The three-day international conference, titled “Religions and the Sustainable Development Goals: Listening to the cry of the earth and of the poor,” looked at how religions can help the world reach the goals by 2030.

The March 7-9 conference, which was jointly organized by the Dicastery for Promoting Integral Human Development and the Pontifical Council for Interreligious Dialogue, brought together religious leaders from all major faith backgrounds as well as advocates and experts in the fields of development, the environment and health care.

Welcoming the participants, the pope applauded the conference’s objective to include the voice of different religious traditions, including the Catholic tradition, in contributing to “new paths of constructive development.”

Development, he said, is “a complex concept” that has been “almost entirely limited to economic growth,” thus leading the world down a “dangerous path where progress is assessed only in terms of material growth.”

Such a path has caused many to “irrationally exploit the environment and our fellow human beings,” he added.

“We should commit ourselves to promoting and implementing the development goals that are supported by our deepest religious and ethical values,” the pope said. “Human development is not only an economic issue or one that concerns experts alone; it is ultimately a vocation, a call that requires a free and responsible answer.”

Pope Francis also expressed his hope that the conference would lead to concrete solutions that respond to “the cry of the earth and the cry of the poor” while promoting serious commitments “that develop alongside our sister earth and never against her.”

“If we are truly concerned about developing an ecology capable of repairing the damage we have done,” the pope said, “no branch of science or form of wisdom should be overlooked, and this includes religions and the languages particular to them.”

NEXT: Christians and Jews must join to fight hatred, promote women, pope says