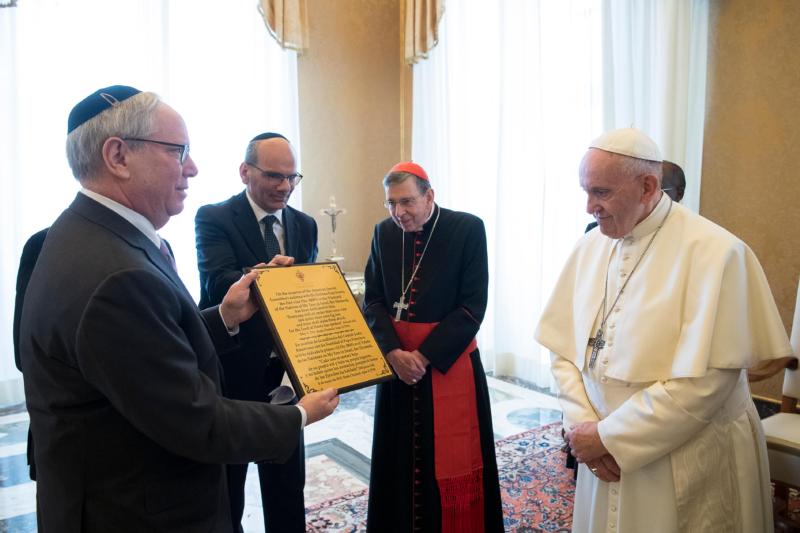 A representative of the American Jewish Committee gives Pope Francis a certificate March 8, 2019, certifying that a grapevine in Israel has been dedicated to him and promising that each year he will receive a bottle of wine produced with the vine’s grapes. (CNS photo/Vatican Media)

VATICAN CITY (CNS) — Engaging in any form of anti-Semitism is a direct contradiction with the Christian faith, Pope Francis said.

Meeting members of the American Jewish Committee March 8, the pope shared his “great concern” over “the spread, in many places, of a climate of wickedness and fury, in which an excessive and depraved hatred is taking root,” including “the outbreak of anti-Semitic attacks in various countries.”

“It is necessary to be vigilant about such a phenomenon,” he said, because, as the Vatican Commission for Religious Relations with the Jews said, “History teaches us where even the slightest perceptible forms of anti-Semitism can lead: the human tragedy of the Shoah, in which two-thirds of European Jewry were annihilated.”

Cultivating good relations, showing respect for others and being vigilant against any sign of hatred and prejudice is “a call from God,” the pope said.

Christians and Jews, he said, must transmit to their children “the foundations of love and respect. And we must look at the world with the eyes of a mother, with the gaze of peace.”

“Women make the world beautiful, they protect it and keep it alive,” the pope said. “They bring the grace of renewal, the embrace of inclusion and the courage to give of oneself.”

“If we take to heart the importance of the future, if we dream of a future peace, we need to give space to women,” Pope Francis said.

Interreligious dialogue, he said, is an important part of efforts to fight hatred and anti-Semitism. The dialogue aims to promote “a commitment to peace, mutual respect, the protection of life, religious freedom and the care of creation.”

Pope Francis urged Jews and Christians to work together, countering the spread of “a depersonalizing secularism” by “making divine love more visible for humanity” and engaging in common works of charity “to counter the growth of indifference.”

“In a world where the distance between the many who have little and the few who have much grows every day,” he said, “we are called to take care of the most vulnerable of our brothers and sisters: the poor, the weak, the sick, children and the elderly.”

Pope Francis also encouraged Catholics and Jews to involve young people in interreligious dialogue as “an effective means of countering violence and opening new paths of peace with all.”

John Shapiro, president of the American Jewish Committee, thanked Pope Francis for deciding to open to scholars in March 2020 material in the Vatican Secret Archives covering World War II and the papacy of Pope Pius XII.

“We look forward especially to the involvement of the leading Holocaust memorial institutes in Israel and the U.S. to objectively evaluate as best as possible the historical record of that most terrible of times, to acknowledge both the failures as well as valiant efforts during the period of the Shoah,” Shapiro said, according to a statement from the AJC.

Members of the group also presented Pope Francis with a certificate testifying that a grapevine dedicated to him would be the first in a “vineyard of the nations,” a vineyard in Israel where each vine is sponsored by a Christian outside of the country. In addition, they told the pope, each year he would receive a bottle of wine from his vine.

NEXT: At National People’s Congress, China recommits to molding religions