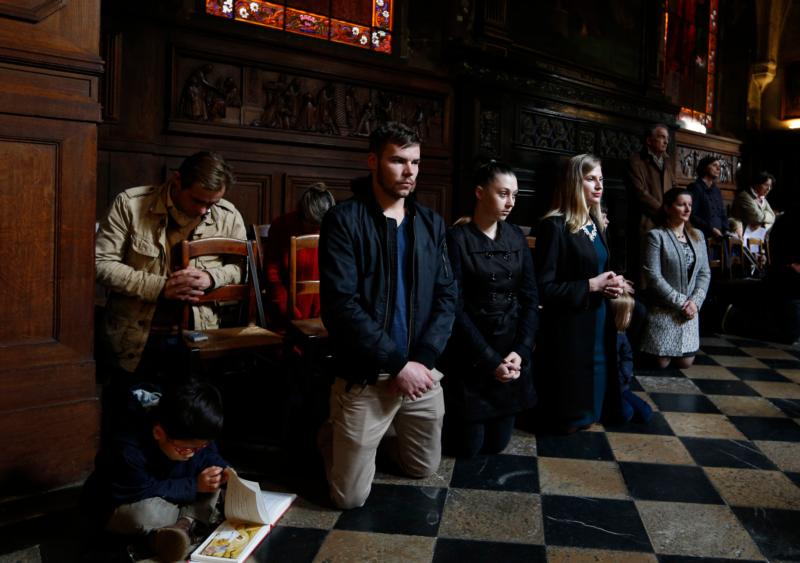 People kneel during a Mass celebrated for terrorist victims at St. Elizabeth of Hungary Church in Paris Nov. 15, 2015. Archbishop Ivan Jurkovic, the Vatican observer to U.N. agencies in Geneva, said March 5 that violating religious freedom harms not only the individuals being persecuted, it also damages communities and often opens the door to further violence. (CNS photo/Paul Haring)

VATICAN CITY (CNS) — Violating religious freedom harms not only the individuals being persecuted, it also damages communities and often opens the door to further violence, a Vatican representative said.

Archbishop Ivan Jurkovic, the Vatican observer to U.N. agencies in Geneva, also insisted governments should make sure laws allow for conscientious objection, so people can “act freely, in accordance with their deepest conviction.”

The archbishop spoke March 5 during a session of the Human Rights Council devoted to a report on freedom of religion or belief. The Vatican press office released the archbishop’s remarks the same day.

“The right to religious freedom blossoms or withers together with all human rights,” he said.

Despite decades of progress in putting the freedom of religion and belief alongside the right of freedom of expression “as one of the center pillars of the architecture of human rights,” he said “recent reports on the abuse of this right are astonishing.”

“They are worrisome,” he said, “for the predicament of victims who, in so many parts of the world, courageously face discrimination, intolerance, aggression, imprisonment and even death for staying faithful to their conscience.”

It is also worrisome for the future because when people and communities “are not allowed to live and celebrate in coherence with their deepest convictions, the bonds that keep society together dissolve and the violation of rights often turns into a violent crisis,” he said.

Another aspect of freedom of religion that “should be given due consideration,” he said, is the freedom from any form of coercion to act contrary to one’s faith, he said.

With so many more people of different cultures, religions and beliefs living side by side, it is “vital and sensible to incorporate into legislation, with due prudence and wisdom, options that allow everyone, when faced with a problem of conscience, to act freely, in accordance with their deepest conviction.”

Quoting a statement by Archbishop Paul Gallagher, the Vatican’s foreign minister, to the Human Rights Council Feb. 25, he said the desire for such restrictions “show how some politicians and even some quarters of international agencies, forgetting their nature and acting without a mandate, are still uncomfortable with the right of freedom of conscience and belief.”

PREVIOUS: Nicaraguan bishops say they have not been invited to national dialogue

NEXT: Nigerian archbishop: Church works as bridge between Muslims, Christians