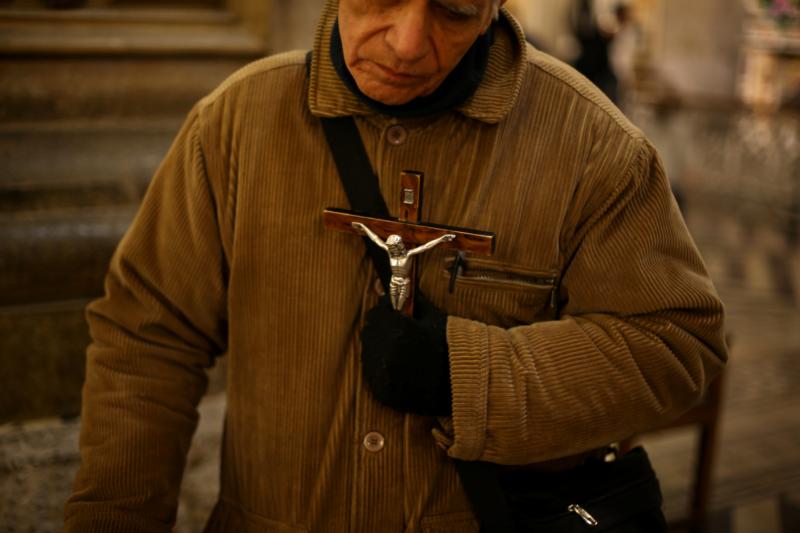 A man holds a crucifix at the cathedral in Santiago, Chile, May 18, 2018. The Archdiocese of Santiago has recommended the former rector of the cathedral be removed from the clerical state after allegations of abuse and his remarks about the church. (CNS photo/Ivan Alvarado, Reuters)

VATICAN CITY (CNS) — The Archdiocese of Santiago has recommended the former rector of the cathedral be removed from the clerical state after allegations of abuse and his remarks about the church.

The controversy began unfolding in early March after Chilean news outlet Radio BioBio published a criminal complaint made in 2015 by Daniel Rojas Alvarez against the Archdiocese of Santiago, regarding alleged abuse in 2015 by Father Tito Rivera, the former rector.

“The archbishop of Santiago has sent the request to dismiss him from priestly ministry to the Holy See, recommending to the Holy Father that it be processed quickly,” the Archdiocese of Santiago said March 14.

The priest made “very serious statements against victims of abuse, the priestly ministry and the sacraments of marriage and confession, among other expressions that we categorically reject,” the statement said.

According to the 2015 complaint, Rojas said he went to the cathedral to seek financial help to buy medicine for his daughter. Father Rivera, Rojas alleged, took him to a room, drugged him and raped him.

Rojas said he tried several times to report the abuse to the archdiocese but was turned away and, at one point, was kicked out and threatened by a priest who worked at the archdiocese’s pastoral complaint office. He also said he spoke directly to Santiago Cardinal Ricardo Ezzati at a confessional in the cathedral.

Cardinal Ezzati, the complaint read, “embraced him and told him to pray for Father Tito Rivera.” Rojas said he was given 30,000 Chilean pesos ($50) by a priest after meeting with the cardinal.

The criminal complaint also said Rojas finally told his wife about the abuse. However, she did not believe him and instead “accused him of being gay” and kicked him out of the house.

Speaking with Chilean news program “Informe Especial” March 7, Cardinal Ezzati said that while he sympathized with Rojas’ sufferings, he denied meeting with or embracing Rojas or ordering any priest to give him money.

The Chilean cardinal also said that the priest charged with investigating Rojas’ complaint was delayed because there was no address to reach Rojas.

Father Rivera, who is 67 and has Parkinson’s disease, denied the accusations, which he said have “tarnished my reputation” and were a ploy to get money. However, the priest also told the Chilean news program “Mentiras Verdaderas” March 13 that he had had consensual relationships with men and women.

Asked why he had sexual relations despite taking a vow of chastity, Father Rivera said that, within the Chilean Catholic Church, “there is a favorable environment for those (homosexual) practices.”

“From the environment that I know and some (priests) that I do know are homosexual,” he said,” I would say perhaps more or less 50 percent” of Chilean priests are homosexual.

Father Rivera also said that within the local church, “there is a form of physical repression and an emphasis on the religious, so many who repress others or were repressed themselves have latent homosexuality.”

He also said that he will seek to be dismissed from the clerical state.

In an interview March 5 with “Informe Especial,” Rojas, who is homeless and sleeps on a park bench, tearfully recalled the abuse he said he suffered at the cathedral. He said he decided to speak out publicly because he wants “truth and justice.”

“That’s all I want, nothing more. Let the hits keep coming at me, let the prejudices come against me because I have already been prejudged: (for) being in the streets, (by) many people who prefer to continue making kindling out of a fallen tree, (for) spending winter on that bench,” Rojas said with tears in his eyes.

NEXT: Cardinal Marx: Church must have serious debate on celibacy, role of women