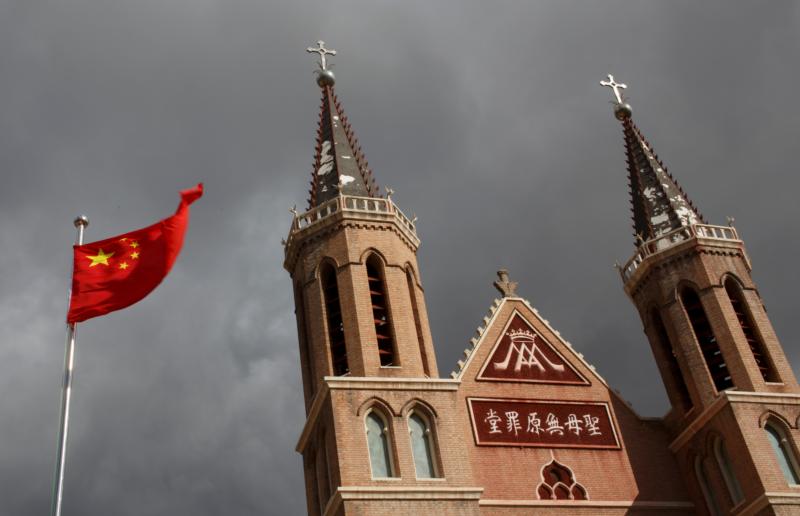 The Chinese national flag flies in front of a Catholic church in the village of Huangtugang, Hebei province, China, Sept. 30, 2018. In a new book, the Vatican secretary of state, Cardinal Pietro Parolin, writes that the Vatican’s recent agreement with the Chinese government was motivated by a desire to spread the Gospel and assure freedom of the church. (CNS photo/Thomas Peter, Reuters)

VATICAN CITY (CNS) — The Vatican’s tentative agreement with the government of mainland China obviously has a diplomatic component, but it was motivated by a desire to spread the Gospel and ensure the appropriate freedom of the Catholic Church, the Vatican secretary of state wrote.

A firm belief that the Catholic Church truly is “catholic” or universal “pushes the Holy See to nurture no distrust or hostility toward any country, but to follow the way of dialogue in order to reduce distances, overcome misunderstandings and avoid new divisions,” Cardinal Pietro Parolin wrote in the preface to a new book.

The book, “The Church in China,” is a collection of essays published in the Jesuit journal La Civilta Cattolica and reflects themes treated by the “China Forum for Civilizational Dialogue,” a project of the journal and Georgetown University.

In mid-September, representatives of the Vatican and the Chinese government signed what they described as a “provisional agreement” on the appointment of bishops, a key sticking point in Vatican-Chinese relations for decades.

Just prior to the agreement’s signing, Pope Francis lifted the excommunications or regularized the status of seven bishops who had been ordained with government approval, but not the Vatican’s consent, marking the first time in decades that all the Catholic bishops in China were in full communion with the pope.

Reports from various regions of China indicate the agreement has not meant an end of government repression or even persecution of Catholics, including the detention of priests.

Cardinal Parolin, writing in the book’s preface, acknowledged that “many problems remain for the life of the church in China,” but he insisted the provisional agreement “is not so much a point of arrival as a starting point.”

He also acknowledged a sentiment among critics of the agreement who believe it ignores the courageous faith of Catholic bishops, priests and laity who for decades refused to cooperate with the government’s Chinese Catholic Patriotic Association, worshipping underground and maintaining their ties to the Vatican.

“Today, as always, the church does not forget the sacrifice of so many of her sons and daughters in China,” the cardinal wrote, “but in light of their example, the church looks for the most opportune ways to reach those who still do not know the Good News and desire a greater witness from all who call themselves Christian.”

“History,” he said, “often forces religious matters and political issues, ecclesial themes and cultural discussions, moral questions and social drama, into inextricable knots,” and the provisional agreement is an attempt to untie those bonds so that the faith can flourish in China.

Much of the cardinal’s preface reflected on the 100th anniversary of Pope Benedict XV’s document on mission, “Maximum Illud,” which, Cardinal Parolin said, urged a renewal of missionary outreach to people who had never heard the Gospel, but also insisted that European and other Western missionaries must not export their cultural, social and political views along with faith in Christ.

“The proclamation of the Gospel in China cannot be separated from a stance of respect, esteem and trust toward the Chinese people and their legitimate state authorities,” Cardinal Parolin said.

“The aims and objectives of the action of the Holy See, specifically in a Chinese context, remain the same as ever: the ‘salus animarum’ (salvation of souls) and the ‘libertas ecclesiae’ (freedom of the church),” the cardinal wrote.

“For the church in China,” he said, “this means the possibility of announcing with greater freedom the Gospel of Christ and doing so in a social, political and cultural setting of increased trust.”

“The Catholic Church in China,” he insisted, “is not a ‘foreigner’ but an integral and active part of Chinese history and can contribute to the edification of a society that is more harmonious and respectful of all.”

PREVIOUS: Worn marble steps of Holy Stairs to be uncovered for public to climb