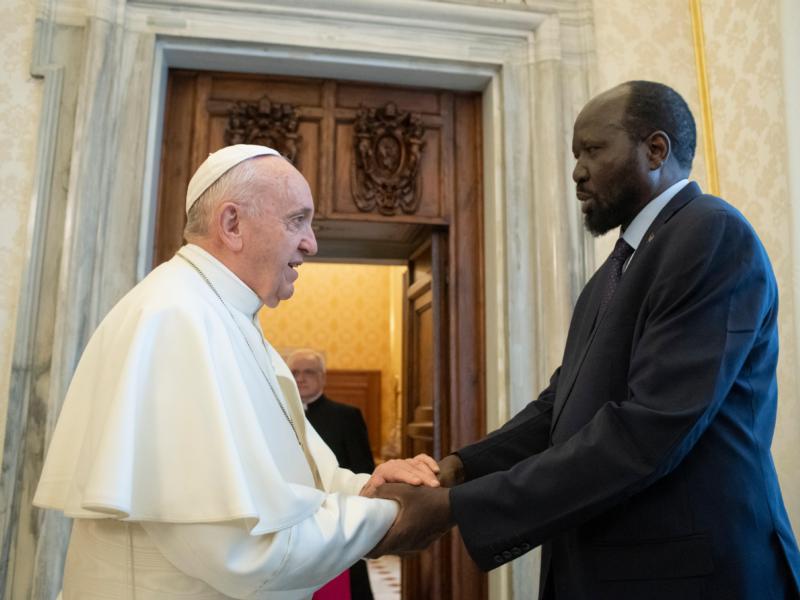 VATICAN CITY (CNS) — As the process to implement a peace accord in South Sudan continues, Pope Francis met March 16 with South Sudanese President Salva Kiir and expressed the hope that, finally, he would be able to visit the country.

During the meeting in the papal library, the Vatican said, the pope and president discussed “matters regarding the implementation of the agreement recently reached by various political actors with a view to a definitive solution to the conflicts, the return of refugees and displaced persons, and the integral development of the country.”

South Sudan gained its independence from Sudan in mid-2011 after years of fighting. But in December 2013, tensions between political factions erupted and civil war broke out. Tens of thousands of people have died in the past year and millions have been displaced.

In the context of the discussions about implementing the September peace agreements, the Vatican said, Pope Francis “expressed the wish to ascertain the conditions for a possible visit to South Sudan, as a sign of closeness to the population and of encouragement for the peace process.”

In late 2017, Catholic Archbishop Paulino Lukudu Loro of Juba, Episcopal Archbishop Daniel Deng Bul Yak of South Sudan and Sudan and the Rev. Peter Gai Lual Marrow, moderator of the Presbyterian Church of South Sudan, visited the Vatican to explain the situation in their country to the pope.

They invited Pope Francis and Anglican Archbishop Justin Welby of Canterbury to visit South Sudan together to bring a message of peace directly to the country’s leaders and citizens; despite the willingness of the pope and the head of the Anglican Communion to make the visit, the lack of security has delayed the trip.

NEXT: Pope leads pilgrims in prayer for victims of mosque attack