Bishop testifies on immigration as president seeks to change asylum 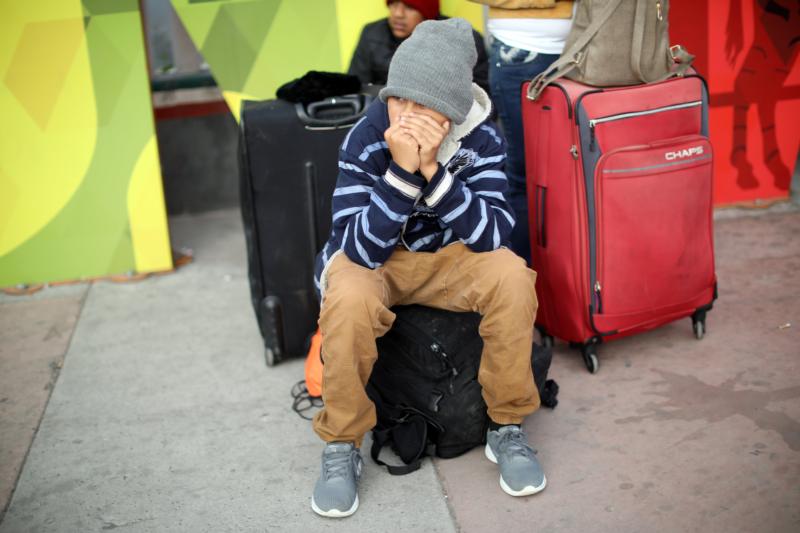 A young asylum seeker sits on his backpack in Tijuana, Mexico, April 25, 2019, before crossing to the U.S. During an April 30 hearing before the House Committee on Homeland Security Subcommittee on Border Security, Bishop Mark J. Seitz of the Diocese of El Paso, Texas, spoke of his border community’s response assisting asylum-seeking families who have been released by the U.S. Department of Homeland Security. (CNS photo/Andres Martinez Casares, Reuters)

WASHINGTON (CNS) — In a memo released late on April 29, President Donald Trump ordered changes for how refugees may apply for asylum to the U.S., requesting an application fee from asylum-seekers and denying them permission to work depending on how the applicant entered the country. Though the changes are not immediate, he gave administration officials 90 days to work on new regulations.

In the memo addressed to the U.S. Attorney General and the Secretary of Homeland Security, Trump said “that the immigration and asylum system is in crisis as a consequence of the mass migration of aliens across our southern border.” He makes mention of caravans and large groups that travel with children.

“The extensive resources required to process and care for these individuals pulls U.S. Customs and Border Protection personnel away from securing our nation’s borders,” he wrote. “Additionally, illicit organizations benefit financially by smuggling illegal aliens into the United States and encouraging abuse of our asylum procedures. This strategic exploitation of our nation’s humanitarian programs undermines our nation’s security and sovereignty.”

In addition to the fees and eliminating work permits for those who entered the country illegally, the president called for all asylum applications to be ruled on within 180 days of filing. He said the purpose of the new norms is “to strengthen asylum procedures to safeguard our system against rampant abuse of our asylum process.”

Hours after the memo was published, Bishop Mark J. Seitz of the Diocese of El Paso, Texas, testified April 30 during a hearing before the House Committee on Homeland Security Subcommittee on Border Security, Facilitation and Operations in Washington. He spoke of his and other border communities’ response in helping families seeking asylum who have been released by the U.S. Department of Homeland Security.

Places such as Annunciation House in the El Paso area and centers run by Catholic charitable organizations, dioceses and other groups in the border communities of McAllen, Texas, as well as Tucson, Arizona, provide families and other individuals seeking asylum with a hot meal, a change of clothes, help with arranging travel plans en route to family or friends in the United States, he explained.

While their work, strength and compassion has been exceptional, Bishop Seitz said the government “has a responsibility to care for people who are arriving with credible claims for asylum and a responsibility to assist anyone in desperate need within our borders.”

“It is an honor for the church and for Christians in general to serve these vulnerable people,” he said, according to a prepared statement. “We do not begrudge the opportunity, but our resources and our volunteers are being significantly strained by the scope and duration of the high arrival numbers. The church and other humanitarian service providers and the local communities along the border are key partners in this effort and need to be recognized by our federal government as such.”

He said the Trump administration’s policies show “concerning” effects on the vulnerable populations of children and families at the border.

“There are serious concerns about the mistreatment families receive along the dangerous migration journey and, sometimes, at the hands of U.S. Border Patrol,” he said. “I worry that with the continued dehumanizing rhetoric regarding immigrants and refugees, a culture of disrespect and corresponding negative policies for those who come seeking refuge has begun to take form. To this end, my brother bishops and I remain deeply troubled by the administration’s recent efforts to curtail the ability of asylum-seekers arriving at the U.S./Mexico border to seek protection.”

He highlighted the administration’s attempt to bar individuals from being able to claim asylum if they entered the U.S. through the southern border without going through an official Port of Entry, the “Remain in Mexico” policy, which sends certain asylum-seekers to Mexico to wait while their cases are being adjudicated in the U.S. immigration court system.

“As my brother bishops along the border between Texas and Northern Mexico have noted, these policies harm our immigrant brothers and sisters in need,” he said.

He particularly urged the administration to “rethink” the “Remain in Mexico” policy because it forces vulnerable people to wait in uncertain and dangerous conditions in Mexico and “poses grave safety, humanitarian and due process concerns,” he said.

He urged Congress and the administration to look at the causes of migration and to look to support the struggling nations that immigrants are coming from, not withholding economic aid but investing in anti-gang and anti-corruption programs to help vulnerable families and children, as well as fund initiatives to promote human rights in the sending countries, Bishop Seitz said.

“Our nation has had a long and proud history of providing humane treatment to and due process for asylum-seekers,” he said. “I urge us to reject policies and proposals that would abandon this tradition, and I ask our government to remember that those fleeing to our border are not the ‘other’ but fellow children of God.”