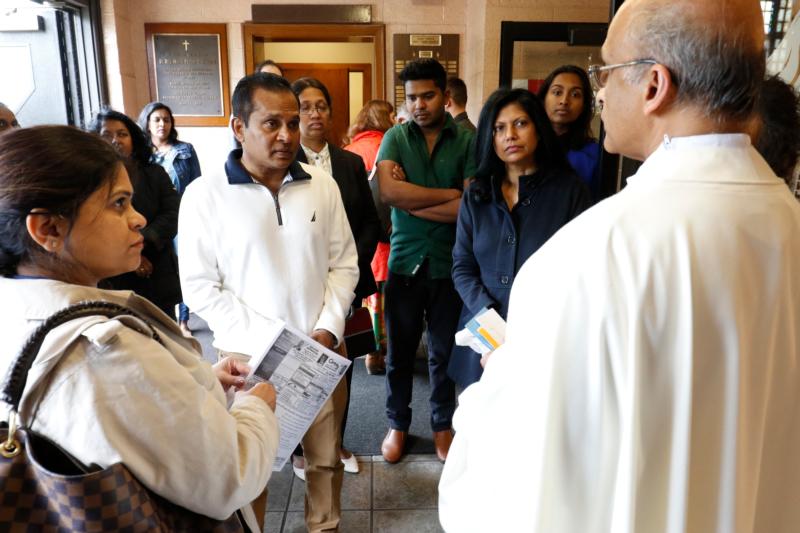 Sri Lankan immigrants on Staten Island and Long Island spent the rest of the day anxiously waiting for news of family and friends after terrorists linked to the Islamic State group claimed responsibility for bombing three churches and three luxury hotels.

The mourning process and memorial services began immediately, long before anyone knew whether the death toll included relatives or friends.

Father Chinthaka Perera, an associate priest at St. Boniface Martyr in Sea Cliff on Long Island, managed to call his parents in Sri Lanka first: “They are safe, they are fine.” But said he was unable to contact friends there even after social media connections were reestablished.

The priest is from Colombo, the capital city, where St. Anthony’s Shrine was a bombing target. The other two houses of worship involved were St. Sebastian’s in Negombo and the evangelical Zion Church in Batticoloa. Catholics make up less than 8 percent of Sri Lanka’s population.

Staten Island resident Nihal Dissanayake, who works for the Metropolitan Transit Agency in New York and like Father Perera, is from Colombo, has been keeping the expatriate community connected through his Facebook page, Sri Lankan Catholics of New York & New Jersey.

As the initial shock turned to rage, the page has become a forum for some government criticism, but Dissanayake, a naturalized citizen who has lived in the United States for 33 years, told Catholic News Service he expects the page to veer between criticism and expressions of grief for quite some time.

“This is something no one had expected,” he said. ‘Why did they choose us? Why did the government not take any action when they knew, the day of the attack, that something was planned? And they did not act on it.”

Staten Island has the largest single expatriate population of Sri Lankans in the United States, numbering more than 5,000. The population swelled during the country’s civil war, which lasted 30 years, just ending in 2009.

For Sri Lankans in the United States, learning the identities of the bombing victims has been made difficult by the Sri Lankan government’s since-lifted ban on social media, an effort to stop misinformation that instead created suspicion and anxiety and slowed the release of victim names.

“One of my friends living in Staten Island lost seven people in her sister’s family,” Dona Kiriella, a parishioner of St. Adalbert’s Catholic Church, told Catholic News Service. She said a friend in Brooklyn was hospitalized from shock because one of his nieces and a few best friends died.

Her brother also had a close call with tragedy. After their mother died last year, her brother stayed with her father, visiting his own family on alternate weekends. Easter Sunday was when he’d normally attend Sunday Mass, but he’d changed his mind. “There are so many stories,” Kiriella said.

Her daughter Dona Ann added: “Through faith, it gives my family a source of comfort knowing that God has a larger plan with the angels from Sri Lanka. An event like this should make us keep in mind to love our neighbor and our enemies and to pray for peace.”

“In the midst of the storm, we are all together united in prayers asking God to show us the way, lead us in the right manner, also to forgive all those evildoers,” said Lalith Randeniarachchi.

Venodini Sanmuganathan read Pope Francis’ prayer for peace at the April 24 interfaith memorial service hosted by Sri Lanka’s Permanent Mission to the United Nations. “It has sustained my faith,” she said. “Although the shock and pain still remains in my heart, I believe God will strengthen me as he has always done in my times of fear and trouble.”

Disssanayake’s Facebook page includes a photo of a statue of the Virgin Mary at St. Philip Neri’s Church in Katukurunda, Sri Lanka on Good Friday. The statue appears to be weeping tears of blood. “When Our Lady is crying there is a reason behind it. She knew about the bomb attacks. Heaven allowed her to give us a warning to pray with her … but we didn’t understand,” the post reads.

Father Perera said he knew right away what to tell his congregants.

“I’m going to explain how I feel,” he said. “We believe in peace and harmony, but all of a sudden this incident took place. As Jesus said, we have to forgive them, because they don’t know what they were doing, these persecutors.”

He said his parishioners have to pray for the attackers. “They must not hate them. God may change them to be good people.”

NEXT: Bishop testifies on immigration as president seeks to change asylum