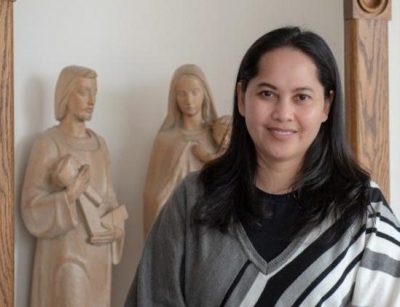 Phally Budock, a survivor of the Cambodian genocide, will enter the Catholic Church during the Easter Vigil at St. Andrew the Apostle Church in Silver Spring, Md. She is pictured in a March 13, 2019, photo. (CNS photo/Mihoko Owada, Catholic Standard)

WASHINGTON (CNS) — Phally Budock, who will enter the church this Easter at St. Andrew Apostle Church in Silver Spring, Maryland, has always believed in God, but for a long time she did not understand why God allowed terrible things to happen, such as the atrocities she witnessed during the Cambodian genocide in the late 1970s.

Budock was just 5 when the communist regime, the Khmer Rouge, forced her family out of their home. The regime was trying to eliminate all educated citizens, and Budock’s father, who was educated in the U.S., had a high-profile job as a president of an agricultural bank.

Her family was forced to march to a camp in the jungle in the northern part of the country, and even before they arrived, the Khmer Rouge soldiers took away several members of her family, starting with her father. She vividly remembers running after her father when the soldiers told him to come with them. Her mother scooped her up and told her that he would come back. He never did.

Over the next three years, she saw both her brother and her sister die in front of her, and watched her mother bury them. Before the war, they were a family of 12. After the war, only their mother and five of the children were still alive, two of whom had been out of the country attending college.

When the South Vietnamese Army freed them, Budock’s brother sponsored her, her mother and two of her sisters to come to the United States, and they arrived Nov. 30, 1980, after spending a year in a Thai refugee camp awaiting approval to come to the country.

Because she had trouble understanding how God could allow such terrible things to happen, Budock said she was indifferent about wanting to know more about God or to pray. But through it all, her mother, who was raised Catholic, never lost her faith.

“Before, I knew about (Jesus) through my mother, but I didn’t know him personally,” Budock told the Catholic Standard, Washington’s archdiocesan newspaper.

As an adult, Budock had attended church occasionally with her husband, who is Catholic, but she did not take her faith seriously until after she returned to Cambodia in 2004, which she described as a life-changing experience. There, she witnessed the immense poverty that still exists and was determined to do something about it. She began to wonder: “What is my life about? Why am I here?”

Around 2007, after going through some setbacks, she prayed for guidance.

“I tried to do like my mother did, after watching what she had done for so many years,” she said. “That is the first time I sought Jesus Christ. I asked him, I said, ‘Lord, if you are the God that I always heard about, help me, show me what my purpose is in life.'”

After that prayer, Budock said she felt as if her journey and life shifted. For the next few years, she went through more ups and downs in her faith, until around Easter 2015, when she had was particularly moved while watching the television series “A.D. The Bible Continues.”

The experience led her and her sister to begin to hop between churches in different Christian denominations, seeking to find where they belonged. Budock said after comparing and learning about these different churches, she “came to learn that Catholicism has everything under one umbrella.”

“Other faiths were just pieces of that fullness,” she said.

As she grew deeper in her relationship with God, she also began taking her mom to church and witnessing her deep Catholic faith, before her mom died in September 2018.

“I came to realize what my mother knew all along. … God had been working his miracles for us many times already when he brought us safely out of the jungle after the war and all the way over to the U.S.,” she said.

In addition, after studying the Bible and learning about free will, Budock said, “I have come to understand that atrocities are not the work of God but the work of man.”

Budock said her newfound relationship with Christ has helped her decide on the message of a book she is writing about the Cambodian genocide. Rather than chronicling what happened historically, Budock said her book will have a Christian perspective, because “the world is not going to redeem itself without Jesus Christ.”

“I know a lot of Cambodians will disagree with me. … Those who have not come to Christ, they don’t understand that forgiveness is such a big part of rebuilding humanity; restoring the hurt and the loss,” she said. “It cleanses your heart. It is like detoxing the poison from your system.

“Forgiveness is not going to do away the sins, the crime (they) committed, but it is handing over to God to do what is his responsibility to do; to bring justice to the injustice. … Your job is to let go and forgive.”

In her own life, she said it took about 40 years to learn how to forgive.

In October, while she was attending Mass at St. Andrew Apostle in Silver Spring, she saw an advertisement for the parish’s Stephen Ministry, a team of lay caregivers who support people experiencing life difficulties. Though she was not Catholic yet, the ministry welcomed her.

Budock said accompanying people through difficult times in their lives has helped her to see “what I went through was horrific, and not many people can imagine, but what most people seem to forget is the war within ourselves.”

“It’s the war that we experience every day. … We struggle within ourselves, whether it be divorce or sickness, depression, there are so many things that can attack us from the inside that we tend to think it is a small thing, but it starts within yourself that brings about the bigger picture,” she said.

In January, Budock met Father Dan Leary, the pastor of St. Andrew, during a dinner for Stephen Ministers. He began meeting with Budock and her sister, Pheary Sem, and asked them if they would like to be baptized. When they said yes, they entered RCIA, and both of them will be baptized at the Easter Vigil, April 20, at St. Andrew.

“I am ready to do the will of God, whatever it is,” Budock said.