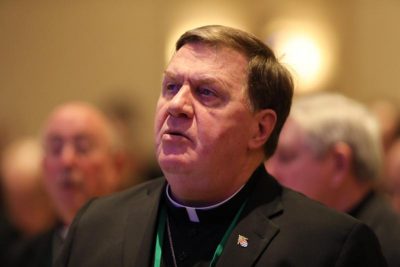 “Every gift of human life is sacred, from conception to natural death, and the life and dignity of every person must be respected and protected at every stage and in every condition,” the cardinal said in a statement April 12, the day Democratic Gov. Phil Murphy signed the Medical Aid in Dying for the Terminally Ill Act, effective Aug. 1.

“Those whose lives are diminished or weakened deserve special respect. Sick or disabled persons should be helped to lead lives as normal as possible,” Cardinal Tobin said.

Under the new law, which goes against the Catholic Church’s fundamental teaching on the sanctity of all human life, adults who receive a terminal diagnosis would be allowed to obtain self-administered medication to end their lives. Murphy is Catholic.

It passed the Assembly 41-33 and the Senate 21-16 March 25. As the measure awaited Murphy’s signature, pro-life groups and other opponents urged state residents to contact the governor and ask him not to sign the bill into law.

In his statement the day of the signing, Murphy said that “allowing residents with terminal illnesses to make end-of-life choices for themselves is the right thing to do.”

“By signing this bill today, we are providing terminally ill patients and their families with the humanity, dignity, and respect that they so richly deserve at the most difficult times any of us will face,” he said, and he thanked the Legislature “for its courage in tackling this challenging issue.”

One of the opponents of the measure who testified at the Statehouse March 25, Dawn Teresa Parkot, who did not mince words when speaking about the Aid in Dying bill.

“I firmly believe that assisted suicide is homicide and those who assist, regardless of their intentions, are guilty of taking a life just as surely as if they participated in a state-sanctioned execution,” said Parkot, a quadriplegic motivational speaker with athetoid cerebral palsy. She uses a computer-based communication system to speak.

“Whatever its motives and means, direct euthanasia consists in putting an end to the lives of disabled, sick or dying persons,” Cardinal Tobin said in his statement. “It is morally unacceptable. Modern health care has made enormous strides in reducing the pain of those terminally ill.”

“As citizens of New Jersey, we should work together to support compassionate care for the disabled, chronically ill or dying,” he added. “We also should be vigilant to a ‘slippery slope’ that permits further modification of the criteria that presently limit the use of euthanasia, as well as health care providers that would deny medications that prolong life in favor of drugs that will end it.”

NEXT: Scammers in emails pose as pastors, ask faithful to buy them gift cards