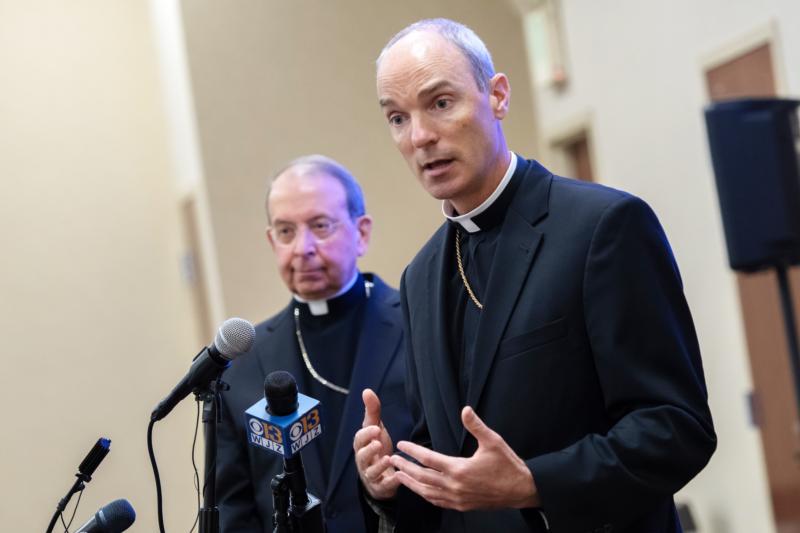 Baltimore Archbishop William E. Lori looks on as Baltimore Auxiliary Bishop Adam J. Parker answers questions from the local media about the church’s abuse crisis during a Jan. 15, 2019, news conference at the Catholic Center in Baltimore. The archdiocese published April 24 an additional 23 names of priests who had been accused of child sexual abuse after they were deceased. (CNS photo/Kevin J. Parks, Catholic Review)

BALTIMORE (CNS) — The Archdiocese of Baltimore has published an additional 23 names of priests who had been accused of child sexual abuse after they were deceased.

All of the allegations have been previously reported to law enforcement, in most cases more than a decade ago. Released April 24, the 23 additional names join 103 other clergy and religious brothers whose names had already been published by the archdiocese.

In 2002, the Archdiocese of Baltimore was one of the first in the country to publish names of those credibly accused of child sexual abuse. At that time, 57 men were named. Other names have been added in the intervening years as allegations became known. More were added in 2018 after a Pennsylvania grand jury report detailed allegations that included some priests who had served in Maryland or cases where the alleged abuse occurred within the boundaries of the archdiocese.

“Here in the Archdiocese of Baltimore, there is absolutely zero tolerance for any bishop, priest, lay employee or volunteer credibly accused of the sexual abuse of a minor or the sexual harassment of an adult,” said Baltimore Archbishop William E. Lori in a news release accompanying the publication of the names.

“My decision, in consultation with our Independent Review Board, to add these additional 23 names is the result of a further review of deceased members of the clergy who were accused after their deaths and who were previously reported to law enforcement. We are confident that we’ve implemented rigorous standards of accountability and transparency and we will continue applying those standards,” he said.

Auxiliary Bishop Adam J. Parker, who serves on the archdiocesan Child Protection Team with five other members of the staff, noted that the archdiocese began looking at the criteria for inclusion on the list last summer at the urging of the Independent Review Board and the encouragement of Archbishop Lori.

One of the newly released names is Bishop Carl A. Fisher, a Josephite priest who was ordained in 1973, and became an auxiliary bishop of Los Angeles in 1987. He died in 1993. “Multiple individuals have accused Father Carl Fisher of sexual abuse that occurred in the 1970s in Baltimore,” the archdiocese said on the list.

“Our main motivation was increased transparency,” Bishop Parker said. “We’re trying to be as transparent as we can about what we know with regard to child sexual abuse cases.” He said it was important to have a “reasonable threshold” to add the names of deceased clergy to the list, since the accused person cannot defend himself.

The archbishop and the Independent Review Board, which assists the Archdiocese of Baltimore with child protection efforts, jointly directed that the names of priests and brothers accused of child sexual abuse after their deaths be added under the following criteria:

— If the archdiocese received an allegation of child sexual abuse from more than one victim;

— If a single allegation of child sexual abuse were substantiated through external information that corroborated that sexual abuse occurred;

— Or if the name of the priest or brother were already published elsewhere in connection with an allegation of child sexual abuse.

The Independent Review Board recommended that an accused person’s name not be added to the list if the allegation of child sexual abuse could not be substantiated or was ruled out, or where the allegation was from a third party and the archdiocese could not speak with the alleged victim.

Bishop Parker said the review board gave the archdiocese a mandate to publish additional names, but also said that because of the difficulty in assessing credibility on decades-old incidents, the threshold for publishing a name should be high.

“That’s out of fairness to the parish communities where those priests served, to the families of those priests and to the deceased priests themselves, especially in a case where there may have been only one allegation,” he said. “And not publishing a name does not mean we don’t believe the victim who came forward. It simply means we could not substantiate it.”

He said Cardinal William H. Keeler of Baltimore made a clear line in 2002 when the list was first published that names would not be published of priests or brothers who were deceased when the archdiocese first learned of an allegation against them.

When the list was first published in September 2002 after the U.S. bishops had passed the “Charter for the Protection of Children and Young People” and the accompanying norms for implementation, Baltimore was only the second diocese to do so. Cardinal Keeler took a lot of criticism for doing so, especially from local priests and from other bishops in the U.S. who believed the list should not have been published at all.

“Now, hindsight has shown that to be a prophetic move and the very priests who may have been critical 17 years ago when that disclosure occurred, see the wisdom of it and are certainly praising Cardinal Keeler for having the foresight to do it,” Bishop Parker said.

“The attorney general investigation is ongoing, and we are cooperating with that investigation,” Bishop Parker said. “But this was a measure of transparency that is apart from that investigation. I would like to be clear that we’re not being compelled to make this publication, other than our own sense of it being the right thing to do.”

He said the archdiocese continues to strive to restore credibility and trust.

“It’s important for healing and it’s important for other victims who may not have disclosed their own abuse to be able to come forward,” he said. “We feel that at this point in time that there are a lot of people who are looking at the church and saying, ‘Have you told us everything you know? Is there more to this story?’ And we want to increase that transparency.”

He said some of those who have been hurt by members of the clergy may not realize that they are not the only victim of a particular perpetrator. “By publishing names in this way, it can help them to come forward and then hopefully achieve some measure of healing that they may not have experienced thus far,” he said.

He said people are looking for leadership on this issue and that Archbishop Lori is making strides to “be the true shepherd that he is,” in part by establishing new policies on episcopal accountability that may become a model for other dioceses. The U.S. bishops are expected to adopt measures on the accountability of bishops at their meeting in Baltimore in June.

Editor’s Note: The Archdiocese of Baltimore’s full list of 123 clergy and men religious who have been accused of child sexual abuse can be found here.

Gunty is associate publisher/editor of Catholic Review Media, the publishing arm of the Archdiocese of Baltimore.

NEXT: As refugee child, she knew no English; now as teen, she’s poetry champ