As refugee child, she knew no English; now as teen, she’s poetry champ 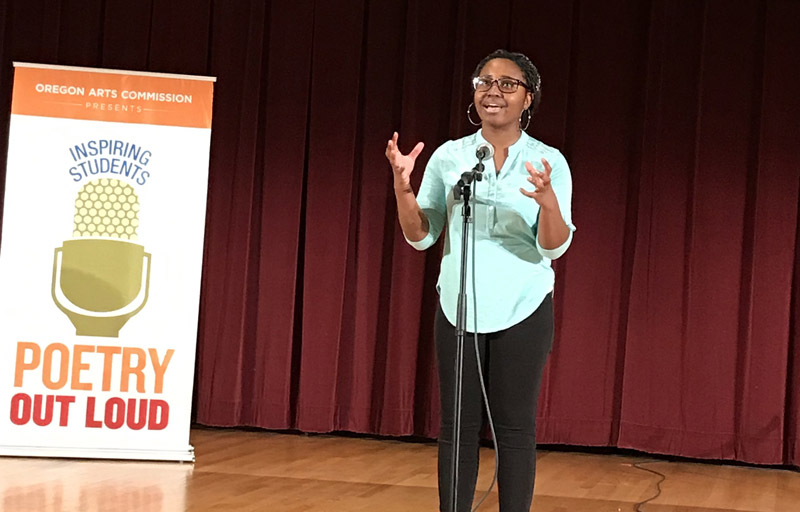 Belise Nishimwe, a sophomore at St. Mary’s Academy in Portland, Ore., performs March 9 at Oregon’s 2019 Poetry Out Loud competition, which she won. Nishimwe wants to study law and international affairs in the future and hopes to “speak up for and lift up those who have been put down.” She will compete in the national Poetry Out Loud competition in Washington April 30-May 1. (CNS photo/courtesy Oregon Arts Commission)

Born in a refugee camp in Tanzania, she came to Portland at age 5 unable to speak or understand English. She couldn’t pass her first year of kindergarten.

“But wow, she found her voice at a young age,” said Erin Weisensee, an Oregon Catholic who helped the family resettle in the United States and remains a close friend. “She’s powerful, articulate and unafraid.”

At the end of April, Nishimwe will share her vocal and inner power at a national poetry competition in Washington. It will be livestreamed online at arts.gov.

The St. Mary’s Academy sophomore month was named Oregon’s Poetry Out Loud champion in March, beating about 8,000 high school contestants in the state, according to the Oregon Arts Commission. The commission organizes the state contest in collaboration with the National Endowment for the Arts and the Poetry Foundation.

“Other students gave beautiful recitations — performances — but Belise does not perform her poems; she speaks them as though they were her words; she inhabits them,” said Ellie Gilbert, an English teacher at St. Mary’s who coached the 17-year-old for the competition.

Poetry Out Loud competitors select poems, then study, memorize and recite them.

Nishimwe won first place for her recitation of “Love’s Philosophy,” by Percy Bysshe Shelley, an English Romantic poet; “If We Must Die,” by Jamaican-born Claude McKay, a key figure in the Harlem Renaissance; and “Worth,” by Marilyn Nelson, whose work examines race, feminism and the ongoing trauma of slavery in America.

“Belise’s background makes her particularly passionate about issues people face who live in the margins,” said Sara Salvi, a creative writing instructor at St. Mary’s who also helped prepare Nishimwe for Poetry Out Loud. “I believe that comes through in her poems; it gives her an authenticity.”

Two of the poems are by black activists, and Nishimwe wanted Shelley’s piece in the mix to show a different part of herself.

“People often have labels tied to them — ‘refugee,’ ‘immigrant,’ ‘woman’ — and others don’t think about their ability to love. This poem was to show that I can be playful and loving,” she told the Catholic Sentinel, newspaper of the Archdiocese of Portland.

“If We Must Die” is a call to act against oppression. “I imagined making a speech like MLK,” said Nishimwe, referring to slain civil rights leader the Rev. Martin Luther King Jr. “It exemplifies using my voice to empower others to do good.”

She was drawn to the title of “Worth,” a poem that addresses being black and a woman. “I tell myself that I’m worth something, and others in situations like mine that they are worth something.”

Nishimwe’s family escaped genocide in Burundi and spent about 10 years in a refugee camp. They resettled in the United States in 2007 with help from Oregon Catholic Charities and parishioners of Holy Redeemer Church in North Portland.

“They made it possible to keep my family together and get my entire family to America,” said Nishimwe, who has seven siblings. “I know many refugee families are separated.”

Salvi said the support the family received is an inspiring expression of community and faith.

Holy Redeemer parishioners helped find the family an apartment, taught them how to ride the bus, and provided everything from furniture and clothes to utensils.

Weisensee met the family hours after they got off a plane. “It was love at first sight,” she said. That love and her family’s assistance have endured for years. The mother of four even taught Nishimwe and her sisters how to read and speak English.

Once she knew the language, Nishimwe began writing poetry and dreamed of being an author. But she stopped composing pieces in middle school when it became increasingly difficult to juggle homework and responsibilities at home.

Like her older siblings before her, Nishimwe helps her parents, who speak little English, navigate life in the United States. She fills out forms for insurance and taxes and writes checks and permission slips.

“It’s been hard a lot of times taking on these parental roles,” said Nishimwe. “Sometimes I’m frustrated or angry and have to come to school happy and willing to learn. I can’t always talk to my peers about it because they aren’t going through the same thing.”

She said the Poetry Out Loud competition “felt like a door back into writing poetry” and the joy it brings.

Nishimwe believes studying other poets’ works challenges her to think critically about how to construct her own poems and strengthens her ability to communicate boldly. She eventually wants to study law and international affairs and hopes the skills she’s gained help her “speak up for and lift up those who have been put down.”

Gilbert said the teen’s recent success sometimes has overwhelmed her.

“Belise’s story is compelling; in many ways it’s the American dream,” said the teacher. “My hope is that Belise holds on to her own dreams — that her heart remains clear … so she can continue to follow it.”

PREVIOUS: Baltimore releases names of 23 priests accused of abuse after they died

NEXT: Court upholds rule that House open each day it is in session with prayer