Bishop ‘dismayed’ over university president’s call for his resignation

BUFFALO, N.Y. (CNS) — A Buffalo diocesan spokeswoman said April 12 that Bishop Richard J. Malone is “disappointed and dismayed” over the president of St. Bonaventure University’s call for his resignation as head of the diocese. 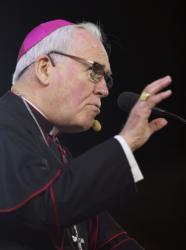 Dennis DePerro, in several interviews, said he admired the bishop’s “unflinching desire to repair the damage” the abuse crisis has caused. “But sometimes, the most courageous thing a man can do is to step aside and recognize that his voice is no longer being heard and that he stands in the way of creating true resolution.”

“We suspect that Dr. DePerro has not fully studied the carefully developed and well-publicized protocols of the Diocese of Buffalo,” said diocesan spokeswoman Kathy Spangler.

“The bishop has received helpful input from others, including the president of Canisius College and other members of the Movement to Restore Trust, on how diocesan procedures might be improved. The bishop would have welcomed and still would accept such input from Dr. DePerro, but to criticize the bishop for following established protocols is unjust.”

In a pair of statements issued April 11, the Diocese of Buffalo both asserted greater transparency in its handling of clergy sex abuse claims and urged respect for the privacy of abuse victims.

The former statement, from Bishop Malone, was issued to “correct some of those errors” about the diocese’s response to the crisis that had cropped up from the “intense media coverage.”

But he also used the statement to address “the times when I personally have fallen short.

He said the diocese is making “great strides to increase transparency” regarding how it handles abuse claims.

Two days after the statements’ release, the diocese made another announcement with regard to the abuse crisis regarding its ongoing partnership with the Movement to Restore Trust, which is an independent organization of Catholic laity formed to lead a movement to restore trust and confidence in the church in the wake of the clergy sex abuse scandal.

The diocese and the lay organization have created what they are calling a Joint Implementation Team.

The diocese said that Bishop Malone had suggested the creation of the team “to foster collaboration in the coming months between the diocese and MRT to prioritize and implement the group’s recommendations for reform.”

The group held its first meeting April 11, facilitated by a staff member of the Leadership Roundtable, and quickly reached agreement on several initiatives, including plans for Bishop Malone to hold diocesan-wide listening sessions.