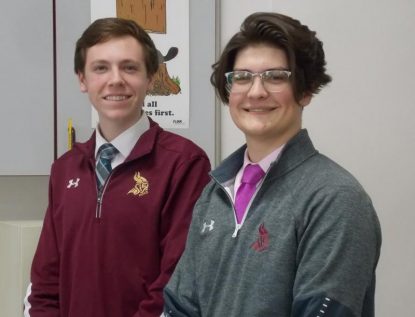 Sean Holly, a senior, and John Kepley, a junior, at St. Elizabeth High School in Wilmington, Del., spearhead Apollo: Youth in Medicine, a program that gives local high school students the experience life in the medical field by shadowing with doctors. They are pictured in a March 7, 2019, photo.(CNS photo/Mike Lang, The Dialog)

WILMINGTON, Del. (CNS) — Internships and shadowing programs are nothing new. It is unlikely, however, that many have been conceived, organized and implemented primarily by high school students. That is one of the unique aspects of the program Apollo: Youth in Medicine.

Last year, Sean Holly had a desire to see what it would be like to work in the medical field, and when he couldn’t find a way to do that, the senior at St. Elizabeth High School, in Wilmington, went to work.

He talked with other students, who like him are part of the Delaware Youth Leadership Network. Some of them had shadowing opportunities in fields they were interested in, but medicine was more restrictive.

Holly said he wanted to shadow some physicians to volunteer and just see what the medical field was about.

So he spoke with a local leader, a school representative an orthopedic surgeon and the president of the Medical Society of Delaware. The group sought feedback from medical professionals and a training session was developed. More students and professionals joined the effort, and Apollo: Youth in Medicine was born.

The program creates opportunities for students who otherwise have no connection to the medical world.

“That was our goal, to provide the networking for these students who don’t have it,” Holly told The Dialog, newspaper of the Diocese of Wilmington.

Four schools were included in the startup phase and each interested student was given one shadowing slot for the fall, and they could get two in the spring if they are able to take the time off from school. More will be available over the summer. Word about Apollo has spread among various high schools.

“Our program is well known within the high school community from students that have already been in the program,” said John Kepley, a St. Elizabeth junior who came aboard early on. “I have friends from different schools that weren’t able to get to the program, which isn’t what we want. We want everybody to have the same opportunity, which is why Sean started this in the first place.”

Shannan Beck, the director of counseling at St. Elizabeth, downplayed her role in the initiative. She said she has provided input about the process of vetting students and has facilitated communication with other school counselors.

Kepley handles scheduling and communication. Each student must go through training in subjects such as the confidentiality of medical records. He said finding interested doctors has not been a problem.

Both Kepley and Holly have shadowed in the fall and this semester.

Beck said Apollo: Youth in Medicine is “‘probably the most ambitious student-designed and student-led initiative” she has been a part of and she’s not surprised at the two students behind it.

Becoming a doctor is not the goal of Apollo: Youth in Medicine, Holly said, noting that some students might find out medicine is not the right career. But the opportunity to experience it first-hand is invaluable, he added.

PREVIOUS: Bishop ‘dismayed’ over university president’s call for his resignation

NEXT: Muslim father, ‘wanting to be part of something,’ joins Catholic Church