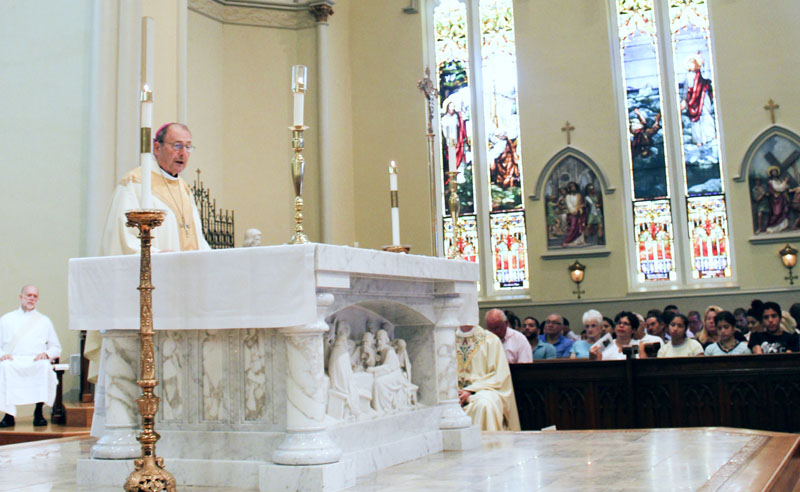 Bishop Robert E. Guglielmone of Charleston, S.C., speaks to a congregation June 24, 2018, at the Basilica of St. Peter in Columbia, S.C. Bishop Guglielmone is celebrating his 10th anniversary leading the Diocese of Charleston. (CNS photo/Christina Lee Knauss, The Catholic Miscellany)

CHARLESTON, S.C. (CNS) — A decade has passed since Bishop Robert E. Guglielmone received the phone call that would change the course of his life.

He was serving as rector of a cathedral on Long Island in New York when he learned that Pope Benedict XVI had selected him to become the bishop of the Diocese of Charleston, serving Catholics in the entire state of South Carolina.

It was a surprising move for a priest who had lived his entire life in New York. He was born on the west side of Manhattan and grew up on Long Island, where he served parishes after being ordained a priest for the Diocese of Rockville Centre on April 8, 1978.

He followed God’s directive to head south and was installed as the 13th bishop of the Diocese of Charleston March 25, 2009. South Carolina was completely new territory for the self-described “Yankee,” but he tackled the job with the down-to-earth, genuine approach that had endeared him to parishioners back home.

“Sometimes it feels like I just started yesterday, and other times it feels like I have been here longer than 10 years,” he said in an interview with The Catholic Miscellany, Charleston’s diocesan newspaper. “I am thankful to God for all the good things that have happened, but it’s not about me. It’s about what the work of God has done for the people of South Carolina.”

In his 10 years in the Palmetto State, Bishop Guglielmone has reached out to people of all ages in a rapidly growing and increasingly diverse diocese, clocking thousands of miles on the roads as he traveled to confirmations, church dedications and other events in every corner of the diocese.

Much of the time, he was accompanied by his beloved canine friends, first Mickey and now Barney.

Bishop Guglielmone commemorated his decade as bishop by celebrating Mass at the Cathedral of St. John the Baptist in Charleston March 24. He looked back on a decade that includes both highs and lows, a time when he worked to strengthen Catholic education, ministry to young adults, and the role of Catholic Scouting in the life of the diocese.

He also has been extremely supportive of ethnic ministries, pro-life and family life programs, and vocations.

One thing that has surprised him most in the time he has been in South Carolina, he said, has been the growth in the state’s population and economy.

“I expected growth because the church in the entire Southern part of the country is experiencing growth, but the extent of what we have had here in the diocese has really been much more than I thought we would see,” Bishop Guglielmone said. “Part of it has been because of the work of people in the church, and part of it is because of all the industry coming to the state — Boeing, Volvo, Mercedes-Benz, Amazon.

“The entire state is experiencing this and it is bringing us growth I did not expect, but that is welcome.”

Among the accomplishments of the past 10 years, he included being able to participate in the growth of the diocese “and helping the faithful meet the challenges of that growth.”

The diocese has opened new high schools, seen other schools add grades and expand their facilities, he said, as well as opened new parishes and built new, larger churches at other parishes.

“There has been a major expansion of Catholic Charities so it has a bigger outreach,” the bishop continued. “And we were able to establish the new pastoral center here in Charleston so that most of the diocesan employees could be together in one location. I am also looking forward to the bicentennial, which should be a wonderful celebration.”

Asked about difficult times during his tenure, he said the abuse crisis has been “the biggest difficulty” for the entire church. “It has been very difficult to learn about and deal with the horror that is the sexual abuse of minors by members of the clergy,” he said.

He said the biggest challenge facing the Charleston Diocese is the need for vocations to the priesthood.

“We continue to have an insufficient number of priests to fill the growing needs of the people,” the bishop said. “We’re managing to serve the faithful in the best way possible, including having deacons and women religious help where they can.”

“Increasing the number of vocations has been a constant goal since I started, and we have good and strong men currently in seminary studying for the priesthood,” he added, “but the fact is we still are not ordaining enough priests each year to meet the needs of the diocese. Increasing vocations continues to be a goal.”

“From the time I came, I found the spiritual life of people here in the Diocese of Charleston to be impressive,” Bishop Guglielmone said. “People here have a deep spirituality and a deep desire for a relationship with the Lord, and encountering them has deepened my own faith.

“I hope the people of the diocese will continue to pray and be faithful and pursue their own vocations, so together we can further the kingdom of God.”