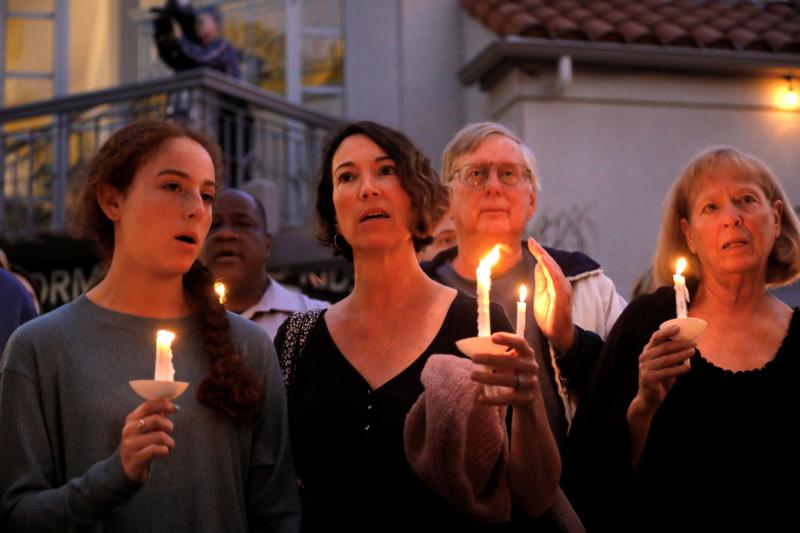 A candlelight vigil is held April 27, 2019, at Rancho Bernardo Community Presbyterian Church for victims of a shooting incident at the Congregation Chabad synagogue in Poway, Calif., near San Diego. In response to the shooting, Cardinal Daniel N. DiNardo of Galveston-Houston and president of the U.S. Conference of Catholic Bishops, said in an April 28 statement: “Our country should be better than this; our world should be beyond such acts of hatred and anti-Semitism.” (CNS photo/John Gastaldo, Reuters)

WASHINGTON (CNS) — Catholic bishops from around the U.S. were quick to condemn the April 27 attack on a Jewish community gathered at a synagogue near San Diego, which left one person dead and three others injured.

“Our country should be better than this; our world should be beyond such acts of hatred and anti-Semitism,” said Cardinal Daniel N. DiNardo of Galveston-Houston, president of the U.S. Conference of Catholic Bishops in an April 28 statement. “This attack joins an all too long list of attacks against innocent people, people of all faiths, who only want to gather and to pray. It is a contradiction, a perverting of their teachings to believe that Christianity, Judaism, or Islam would condone such violence.”

News reports say members of the synagogue Chabad of Poway were gathered to mark the last day of Passover, a Jewish holiday celebrated for eight days, commemorating the deliverance of the ancient Hebrews from slavery in Egypt, when shots rang shortly before noon.

One of them ended up fatally striking 60-year-old Lori Gilbert Kaye as well as injuring the rabbi and an 8-year-old girl, among others. Initial reports say the gunman’s weapon then jammed and the assailant left, but not before being shot at by a security guard who was inside the house of worship. Authorities later said John Earnest, 19, was arrested and is suspected of the attack. So far, he has been charged with one count of murder and three counts of attempted murder.

“Unfortunately, both in the past and today, too many preach such hatred in the name of God. This cannot be abided; it must end,” Cardinal DiNardo said.

San Diego Bishop Robert W. McElroy asked in a letter addressed to priests in the San Diego Diocese to pray at Sunday Masses on April 28 for the victims of the shooting.

“I know that you join in my profound sadness and outrage that violence born of hatred against people of faith has once again rent our nation, this time within our own diocese. I would ask you to include a prayer for the Jewish community and the Chabad victims in your petitions at Sunday Masses,” he wrote.

The bishop suggested using the following petition: “For the victims of the Chabad shootings and their families; for the Jewish community, our elder brothers in faith, who are once again subjected to the evil of anti-Semitic hatred and violence, this time in our own diocese; and for our world, so consumed by anger and division, that we might understand that the gift of peace you give in today’s Gospel is a command for us to love every man and woman in the human family; we pray to the Lord.”

Other messages expressing condolences by cardinals and bishops from around the country followed.

“For the second time in a week, we received news of an act of senseless violence against people at prayer. This time, the victims were our Jewish brothers and sisters, gathered to mark the deliverance of their people from bondage,” said Cardinal Blase J. Cupich, Archbishop of Chicago, on April 27, the day of the tragedy.

“We ask our Lord to deliver us from the evil that engenders hatred in the hearts of men. Let us pray, too, for the courage to insist our leaders remove the tools of terrorism from our society and take the steps other nations have taken to safeguard their people. We will not become indifferent to the suffering of these families and will recommit ourselves to breaking the bonds of prejudice and intolerance. Only then can we build a peaceful nation, with the liberty and justice promised by its founders,” he added.

“Again, we are horrified by the atrocious act of a hate-filled gunman who opened fire inside a California synagogue during services closing the sacred Passover holiday,” said Bishop Nelson J. Perez of the Diocese of Cleveland. “As people of faith, we condemn this evil act of violence. We offer our prayers asking our most merciful and compassionate Father for healing for those who were injured, loving care for the person who was killed and comfort and consolation for their families.”

Bishop Curtis J. Guillory, of the Diocese of Beaumont in Southeast Texas, said via Twitter on April 28 that he was “saddened and deeply concerned that another house of worship has been touched by violence.”