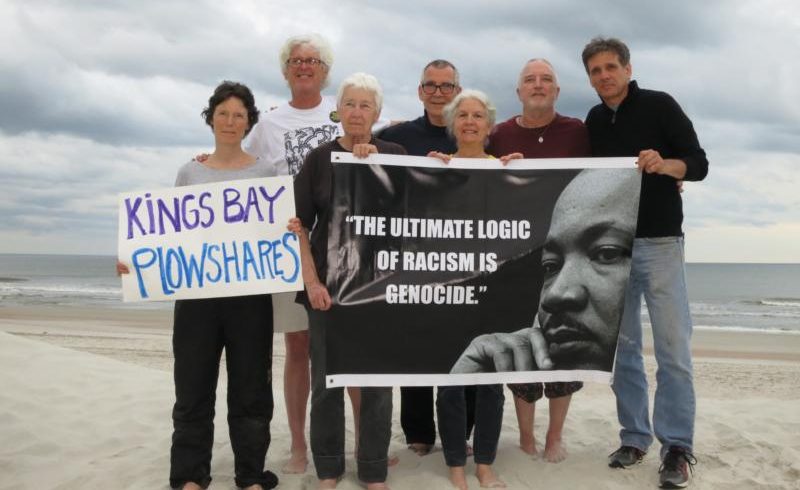 Seven Catholics who call themselves the Kings Bay Plowshares are seen April 4, 2018, before they entered the Naval Submarine Base Kings Bay in Georgia to protest nuclear weapons. They were arrested and charged with conspiracy, trespass, and destruction and depradation of property. Patrick O’Neill, second from left, Martha Hennessy, third from left, and Carmen Trotta, right, have been released on bond. The other four decided not to bond out and remain in a detention facility n Brunswick, Ga. (CNS photo/Kings Bay Plowshares)

WASHINGTON (CNS) — A federal magistrate judge denied motions from seven longtime Catholic peacemakers to have charges dismissed on religious freedom grounds in connection with their April 2018 protest at an East Coast submarine base.

Magistrate Judge Benjamin Cheesbro of the Southern District of Georgia said in an April 26 ruling that the defendants, all Catholics, failed to show that the government violated their rights under the Religious Freedom Restoration Act.

In an 80-page ruling, Cheesbro determined that while the cause the activists espoused is legitimately religious and their faith is sincere, the 20-year prison term that the seven face was the government’s least coercive response to the protest.

Cheesbro said the faith-based activists could have pursued other means to carry out their protest against nuclear weapons on religious grounds rather than illegally entering the Naval Submarine Base Kings Bay in Georgia.

Cheesbro also denied the defendants’ three other legal arguments for dismissal, saying that the federal government acted appropriately in charging them with conspiracy, destruction of property, depredation of government property and trespass in connection with the Kings Bay Plowshares action on the night of April 4-5, 2018.

Bill Quigley, a law professor at Loyola University New Orleans who is pro bono legal representative for the seven, told Catholic News Service April 29 that an appeal of Cheesbro’s decision would be filed with the U.S. District Court for Southern Georgia within 30 days of the ruling.

“We think he was at least half right, that our people are sincere, they were motivated by deep religious, Catholic faith and the opposition to nuclear weapons is a key part of Catholic faith,” Quigley said of Cheesbro’s ruling.

“We disagree with the idea that it’s appropriate that the least restrictive means for the government to address people’s religious belief is by exposing them to 20-plus years in prison. That’s going to be one of the key challenges we bring (in the appeal),” Quigley explained.

Father Kelly, McAlister and Colville remain jailed in Georgia, while the four others have been released on bond.

The protest marked the 50th anniversary of the assassination of the Rev. Martin Luther King Jr. and to “repent of the sin of white supremacy that oppresses and takes the lives of people of color here in the United States and throughout the world.”

The seven entered the submarine base, the East Coast home of the Trident nuclear submarine, and during approximately two hours placed crime scene tape and spilled blood at different locales while posting an “indictment” charging the military with crimes against peace, citing the Nuclear Non-Proliferation Treaty.

The Navy’s fleet of Trident submarines carries about half of the U.S. active strategic nuclear warheads, according to military experts.