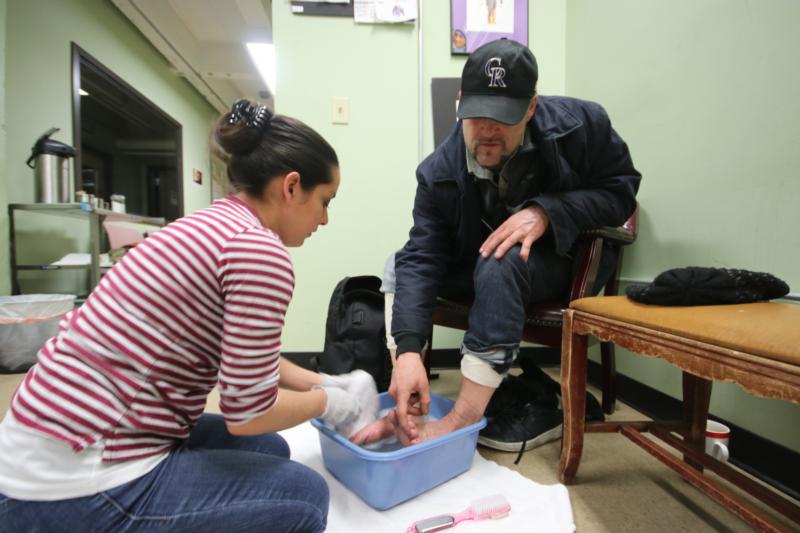 Rodger, who lives under a bridge with his wife, points out a painful spot on his foot to nursing student Elise Realivasquez during the weekly foot-care ministry in the basement of St. Andre Bessette Church in downtown Portland, Ore., Feb. 14, 2019. Nurse Jim Jackson said the ministry gives the homeless a rare ability to make choices about their comfort, from selecting water temperature to picking the color and style of a new pair of socks. (CNS photo/Katie Scott, Catholic Sentinel)

PORTLAND, Ore. (CNS) — Rodger placed his backpack next to a chair, sat down and unlaced worn-out shoes.

“They told me there are going to be Epsom salts,” he said, slowly taking off his socks.

Dirt was visible behind each toenail. Some nails were gnarled.

Rodger has long lived under a Portland bridge with his wife. This winter, after one foot became frostbitten and lost sensation, he unknowingly kicked a hot wood pellet from his fire. The foot was burned and developed an infection.

“There still are tender spots,” he told a nursing student as she placed a tub of warm, soapy water in front of him.

It was a recent Wednesday morning and Rodger’s first visit to the weekly foot-care ministry in the basement of St. Andre Bessette Church in downtown Portland. Here a team of nurses and volunteers tend to those who spend their days thinking about shelter and safety — not what’s best for their feet.

“Foot care so often gets overlooked when it comes to the homeless, but it’s a real need,” said Holy Cross Brother Joe DeAgostino, pastoral associate of the parish.

Near Rodger, a woman named Kat hung a cane over the arm of a chair before sitting down.

She said she’s exhausted from pushing multiple shopping carts — containing all her belongings — for several blocks. “This will feel good,” she said, removing a shoe.

Many guests at St. Andre to receive foot care have old or ill-fitting shoes, and Portland’s soggy winter weather takes an additional toll on foot health.

“Most people take it for granted that when you get wet, you change into a dry pair of socks and shoes,” Brother Joe told the Catholic Sentinel, newspaper of the Archdiocese of Portland. The homeless don’t typically have that option, and constant moisture causes a variety of discomforts.

Sharon Christenson is a seasoned nurse who helped start the outreach 15 years ago. “We see everything here,” including blisters, corns, calluses, warts “and lots of fungus,” she said, arranging antibiotic ointment and sterilized clippers and files.

Nothing fazes the team of four certified nurses. “We aren’t grossed out,” said Jim Jackson, a retired nurse and member of St. Ignatius Parish in Southeast Portland. “I just pray that the Holy Spirit will help me.”

The ministry includes washing, basic care for any specific skin issues, a massage and a new pair of socks. After the massage, “people will stand up and feel their feet on the ground, and their body language shows this blissfulness,” Jackson said.

“Some say they are floating out of here,” added Christenson, a member of St. Juan Diego Parish in Northwest Portland.

For years, Christenson worked downtown and attended Mass at St. Andre. One day after Mass she saw a homeless person with no shoes.

“God, help me live long enough to help someone like this,” she recalled thinking. After retiring, she began the foot-care ministry with a Catholic couple. Along with the nurses, a handful of volunteers come from throughout the region. The team has the capacity to serve about 10 guests each week.

There’s a great need for homeless services of all sorts downtown. Four years ago, the city of Portland declared a housing and homelessness emergency, which is still in effect. The fastest-growing populations on the streets are African Americans, women and older individuals.

Foot care is one piece of the parish’s larger effort to serve the poor and homeless. St. Andre offers food and coffee five days a week and distributes hygiene products. Volunteers give haircuts. There’s even dog food on hand for beloved pets.

Reflecting the larger homeless population, a number of St. Andre’s guests are mentally ill. A 2016 report by the U.S. Department of Housing and Urban Development indicated that nearly 20 percent of America’s homeless individuals have a severe mental illness.

Christenson recalled one such person. “He came in and I said, ‘Let me wash your feet.’ ‘I don’t have any feet; the devil took my feet,’ he said to me.”

She asked if she could wash his legs, and the man agreed. “Once I got his feet in the water, I told him, ‘You know, the devil can’t come in here, this is a place of worship.’ After I said that, he fell asleep. I let him sit there resting for a long time.”

“People here are treated with dignity and love, so they feel safe enough to even fall asleep in a chair,” said Jackson.

The sense of comfort frequently moves guests to disclose bits of their lives.

Christenson has heard stories of childhood abuse and abandonment and of sexual slavery.

“They are told they’re supposed to go to work and have a family and go to church on Sunday, but many are so damaged,” she said. “When they take off their shoes and socks and place their feet in warm water and tell us these things you realize it’s a wonder that they’re surviving at all.”

Christenson and Jackson said the foot care is a means to a more important end — offering friendship, safety and hospitality and forming relationships.

The volunteers emphasize that the ministry is not one-sided.

“It’s saved me in many ways,” Christenson said. “I’ve had some things happen in life, and the volunteers and guests have put their arms around me. It’s a very spiritual happening down here.”

“There is a sacredness,” agreed Jackson.

Brother Joe said it’s impossible to be part of the ministry and not reflect on the Gospel of John, where Jesus washes his disciples’ feet. An artist’s rendering of that act hangs behind baskets of socks.

“This ministry is a reminder that we are all part of the human family, regardless of our belief or background,” said Brother Joe.

In a corner of the basement, Rodger rolled up his pant legs and submerged his feet into the Epsom-salts-filled water. His shoulders relaxed.

PREVIOUS: It’s in the cards for woman religious who threw perfect pitch

NEXT: Many focused on what incoming Washington archbishop will say about race