Many focused on what incoming Washington archbishop will say about race 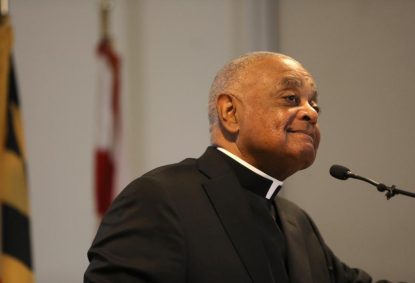 Archbishop Wilton D. Gregory listens to a question from a reporter during a news conference at the Archdiocese of Washington’s pastoral center April 4, 2019, after Pope Francis named him to head the archdiocese. Archbishop Gregory will be the archdiocese’s first black archbishop. Whether it was deliberate or by accident, the announcement came on the 51st anniversary of the assassination of the Rev. Martin Luther King Jr. (CNS photo/Bob Roller)

WASHINGTON (CNS) — Whether it was deliberate or by accident, the Archdiocese of Washington announced on the 51st anniversary of the assassination of the Rev. Martin Luther King Jr. the selection of its new leader, set to become its first black archbishop.

Various news stories noted the date and a reporter asked Archbishop Wilton D. Gregory — whose new appointment by Pope Francis was announced during an April 4 news conference — about the civil rights icon, a question that almost certainly would not have been asked of a white counterpart.

“It was a turning point in my life to have seen this extraordinary American, this preacher of the Gospel, this great humanitarian cut down in his youth and what that loss meant to our nation and indeed what it meant to the world,” Archbishop Gregory answered during the news conference in Hyattsville, Maryland, adding that he was 20 when Rev. King, 39, was assassinated April 4, 1968.

“It was a turning point that allowed me to see a modern-day martyr for the cause of justice, peace, unity and to see the impact that both his life and death have had on people.”

Many eyes, ears and questions, as well as expectations, directed at the new archbishop of Washington have been and will be focused on what he says about race and racism when he officially takes up his new post at his May 21 installation.

“This is a very historic and vibrant black Catholic community in D.C., and I do think it’s quite significant that we’re finally going to have our first African American archbishop,” particularly during a time of rising racism and anti-immigrant sentiment in the country, said John Gehring, Catholic program director for the Washington-based Faith in Public Life.

The incoming Washington archbishop is not new to those issues, said Sister Patricia Chappell, executive director of the Washington-based Pax Christi USA, who has worked with Archbishop Gregory on various church initiatives dealing with race and racism.

He has been a member of the National Black Catholic Clergy Caucus and most recently, Sister Chapell said, he was involved with the U.S. Conference of Catholic Bishops’ statement “Open Wide Our Hearts: The Enduring Call to Love — A Pastoral Letter Against Racism,” approved by the bishops when they gathered as a body in Baltimore in November.

Archbishop Gregory mentioned the document during an April 9 news conference in Atlanta, one of the last with local media as he gets to ready to wrap up 14 years as archbishop there.

The bishops’ statement, he said, “for the first time specifically identified racism as a difficultly that is certainly rooted in the black American experience but is now also an expression that our Latino friends have experienced, continue to experience, as well as well as other immigrant minority people, the Islamic community.”

In places such as Atlanta, he said, while addressing the relationship between Catholics and the Jewish community there, being part of minority communities helped build a bridge between the two.

“Certainly, we faced bigotry together, whether addressed to Catholics or Jews, or African Americans, so that bond links us,” he said during the Atlanta news conference, where he also was peppered with questions about race.

“We need to expand our horizons, not to neglect the fact that racism has a unique voice, unique presence within the African American community, but racism has also tainted our relationship with other groups who have suffered at the hands of those who hate rather than those who love and welcome,” he continued.

Living in Atlanta, the proud hometown of the civil rights icon, helped him better understand issues of race, he said.

“I consider myself a blessed man to have lived in Dr. King’s city for 14 years and witness the pervasive pride this city has for that man,” he said.

Though his experience in dealing with other important issues, mainly the clergy sex abuse crisis, should not be overlooked, said Sister Chapell, his appointment as the Washington Archdiocese’s first black archbishop marks a “historic” and “grace-filled” moment “during chaos in our country, particularly the polarization that’s taking place,” and some of the reactions faced by “people who are different.”

He is a person who can help some members of the church embrace diversity, said Sister Chappell, a member of the Sisters of Notre Dame de Namur.

At organizations such as Pax Christi, which fights against racism, “we stand ready to work with him and support him,” Sister Chappell said, and past developments show that he’s not afraid to talk about the issue.

Following the Charlottesville, Virginia, white supremacist rally that ended up with the death of a counter-protester and riots in August 2017, it was the then-Atlanta archbishop who urged his brother bishops to speak up against what had just taken place.

“For bishops who govern local churches that don’t have a very diverse community, they too have to speak,” Archbishop Gregory told the Catholic website Crux Aug. 13, 2017, a day after the riots ended. “The people in their pews, whether they have African Americans or Hispanics or Asians, or even Muslim neighbors, they have to know that silence in these matters is construed as approval.”

During the Atlanta news conference, Archbishop Gregory tried to set the tone that he’s an archbishop for the diverse archdiocese that he will soon be taking over, which also will includes a large and growing population of Latinos. In the past, he has often highlighted that population, the second-largest ethnic group in the Catholic Church in the U.S. and one whose plight he also seems to be focused on.

“The Latino presence for the church in the U.S. is nothing less than the gift of God,” he said in Atlanta, praising Latinos’ “vitality of hope, of your wonderful family life, your deep religiosity.”

“You’re a blessing and I think one of the things that happened in the Encuentro, which took place a few months ago, was that the Latino community had a chance to broadcast its dreams, its hopes, its vision, its desire to work with their fellow Catholics to build up the life of faith” in the U.S., he said.

When asked in Atlanta what his appointment as the first black archbishop of Washington should signal to those who see limitations because of the color of their skin, he answered: “I hope that they take, whether they be Hispanic, Asian or African American, whatever their origin, I hope that my appointment to Washington, as I hope my appointment to Atlanta, will send them the message that they can dream big,” he said.