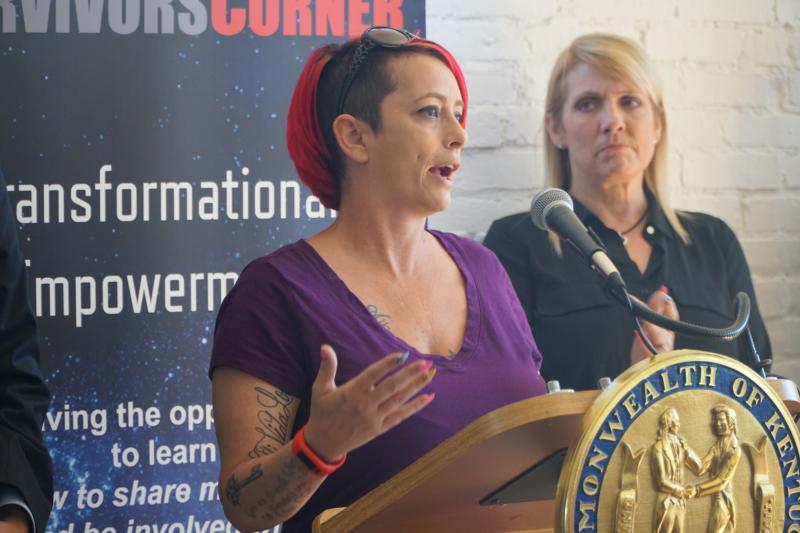 LOUISVILLE, Ky. (CNS) — Summer Dickerson, a young woman who survived sex trafficking, said that four years ago when she sat on Millionaire’s Row, an exclusive seating area at the Kentucky Derby, no one around her knew she wasn’t there for the race.

Dickerson shared her story April 18 at a news conference held by the Kentucky attorney general’s office at Survivors’ Corner — a resource center for victims of human trafficking in Louisville.

Attorney General Andy Beshear said the news conference was meant to inform the public about human trafficking during the Kentucky Derby — a time when he said there is an increase in the buying and selling of individuals for sex and forced labor. This year’s Kentucky Derby is May 4.

Putting a stop to such trafficking will require the community’s effort, he said, and urged people to help by looking for certain signs that someone is a victim such as:

— Individuals with tattoos or branding;
— People who appear malnourished;
— A person who won’t make eye contact;
— Someone who lacks identification documents or personal possessions;
— Individuals who can’t identify the state they are in or where they are staying.

In an effort to identify and protect victims of trafficking, Beshear said his office has partnered with Catholic Charities of Louisville, the University of Louisville and the Transit Authority of River City.

Through the partnership with Catholic Charities, the attorney general said, his office secured the first grant to combat human trafficking. The grant was used to train 9,000 individuals state-wide to detect and report trafficking.

Every transit driver and dispatcher has been trained as well. And for the first time this year, an individual trained to spot victims of trafficking will be aboard every bus during Derby week, he said.

Such efforts pay off, he added, noting that last year, during events in the city, 39 individuals suspected of taking part in trafficking activities were arrested. One was prosecuted, found guilty and sentenced to 20 years in prison.

“Any efforts to combat human trafficking needs to be collaborative,” said Castellanos. “The active engagement of many organizations to help identify, investigate and serve survivors is needed, especially to do really good comprehensive work.”

The Bakhita Empowerment Initiative aims to educate the community about human trafficking and provide housing, food, clothing and legal and immigration aid to survivors.

During the news conference, Dickerson shared with those in attendance that people often ask her, “What are you doing for Oaks and Derby?” referring to the two races; the Kentucky Oaks, for female horses, takes place the day before the Kentucky Derby.

“Four years ago, I was being sold on Oaks and Derby. Four years later, I’m part of the solution,” she said.

Dickerson — founder of the Women of the Well ministry for trafficking survivors based in Louisville — said she lived in Chicago for a time and even then she was brought to Louisville to be trafficked during the Derby.

“I sat on Millionaire’s Row and no one realized I was a victim,” she recalled.

As the 145th Kentucky Derby draws near, efforts to raise awareness about trafficking will continue, said Castellanos.

PATH (People Against Trafficking Humans) will hold the seventh annual prayer service to remember victims of human trafficking April 30 at Jefferson Square Park in Louisville and a second annual Stop the Traffic Gala will take place May 3 raising funds for the Bakhita Empowerment Initiative.

Thomas is staff writer for The Record, archdiocesan newspaper of Louisville.