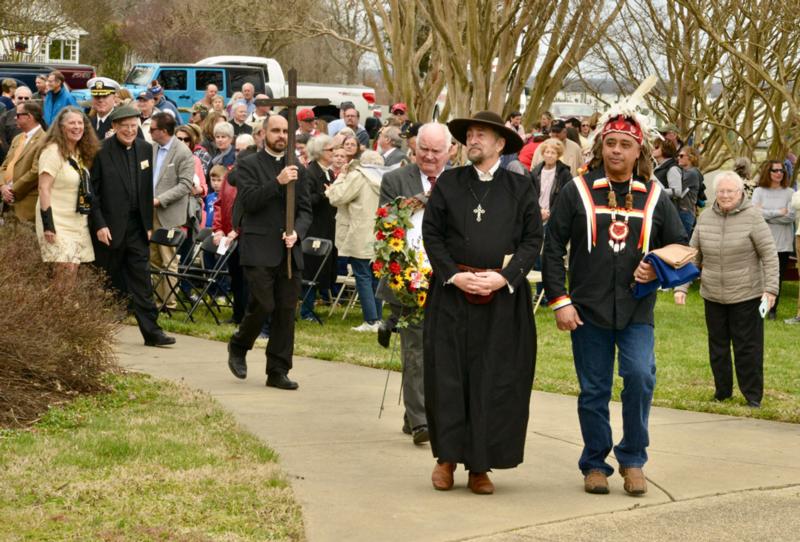 ST. CLEMENT’S ISLAND, Md. (CNS) — On their four-month ocean voyage from England to the new Maryland colony nearly 400 years ago, the approximately 150 men and women on board boats named the Ark and the Dove endured stormy seas and the risk of being ambushed by pirates.

And when their ships sailed through the Potomac River and made landfall March 25, 1634, on an island they named after St. Clement, the patron saint of mariners, they came ashore offering prayers of thanksgiving as Jesuit Father Andrew White celebrated the first Mass in the English-speaking colonies.

Lord Baltimore, who was Catholic, established the Maryland colony as a haven for religious toleration, and historians now regard Maryland as the birthplace of religious freedom in the United States.

That heritage was celebrated in a special way this March 25 on the annual Maryland Day, as a treasured artifact of early U.S. Catholic history — a 17th-century iron cross believed to have been hammered together by a blacksmith on board either the Ark or the Dove — returned to St. Clement’s Island in Southern Maryland.

“It’s the first cross brought to our part of the New World,” said Jesuit Father G. Ronald Murphy, who brought the cross with him from Georgetown University and displayed it outside the St. Clement’s Island Museum as he gave the keynote address at a special Maryland Day gathering there.

The 80-year-old professor emeritus of German literature at Georgetown told the story of how he rediscovered that cross in the university’s archives in 1989 after it had been lost to history.

At that time, he was serving as the superior of the Jesuit community at Georgetown, and when visiting an historic parish founded by his order on Maryland’s Eastern Shore, he saw a cross described as replica of the first cross brought to Maryland by the original English colonists, with the original said to be at Georgetown University, the nation’s first Catholic university, which was founded in 1789 and continues to be sponsored today by the Society of Jesus.

His curiosity about the cross led him to search through the university’s artifacts, which he said included old chalices and liturgical vestments, and even drums, muskets and sabers from the Civil War.

“When (Georgetown) students came back from the war, they were asked by the priests to turn in their weapons,” Father Murphy said, laughing.

The Jesuit priest said he was about to give up his search, when he wanted to take a look at a wall filled with swords, and he tripped on something, and there on the floor, he spied a cross on a wooden palette.

“I did stumble across it. … That’s how it got reclaimed,” he said.

The priest spoke to a standing-room crowd gathered outside the St. Clement’s Island Museum at Colton’s Point, within view of the historic island about one-half mile away across the water.

“It really is a beautiful piece,” Father Murphy said. At times during his address, he held aloft the simple cross, which is 4 feet tall, 2 feet wide and weighs about 24 pounds. It was hammer-welded from strips of iron, probably from ballast on one of the ships. The priest noted the inscription on its vertical bar, which reads, “This cross is said to have been brought by the first settlers from England to St. Mary’s.”

After landing at St. Clement’s Island, the colonists — who included Catholics and other Christians — established their settlement at nearby St. Mary’s City, which became Maryland’s first capital. A reconstructed Brick Chapel at Historic St. Mary’s City based on a 1667 building stands today as a monument to Maryland’s pioneering role in safeguarding religious liberty, which would later be enshrined as the first freedom in the U.S. Constitution’s Bill of Rights.

Since it was rediscovered, that iron cross has been displayed at Georgetown University’s Dahlgren Chapel, and from mid-2017 to 2018, it was part of an exhibit on “Religion in Early America” at the Smithsonian’s National Museum of American History.

The cross also has been part of a modern historic event, when it was displayed on the ambo that Pope Francis preached from in 2015 outside the Basilica of the National Shrine of the Immaculate Conception in Washington, when the pontiff presided at the first sainthood ceremony ever held in the United States — the canonization Mass for St. Junipero Serra, the famous 18th-century Spanish Franciscan who established missions along California’s coast.

Father Murphy opened his talk by noting, “I have heard about St. Clement’s Island all my life, and now I’m looking at it.” He added, “It’s not very big.”

Erosion has caused the island to diminish to 40 acres, about one-10th of its size when the English colonists landed there. Now visitors can take water taxis to visit St. Clement’s Island State Park.

Later as he finished his address after he recounted the cross’s rediscovery and its importance, the priest said, “That’s the story of Maryland’s first cross.”

Crosses have marked the history of St. Clement’s Island for nearly four centuries. After the colonists participated in the first Mass there, they erected a large wooden cross hewn from a tree there, and knelt down and prayed the Litany of the Cross. In 1934 to mark the 300th anniversary of Maryland, a 40-foot high cross built of oil barrels covered in white stucco was erected on the island and still stands there today.

About 40 students from the chorus at Father Andrew White, S.J. School in Leonardtown sang the state song, “Maryland My Maryland” to help open the ceremony, and Sarah Skane, a student from St. Mary’s Ryken High School in Leonardtown, sang the national anthem. Father Samuel Plummer, the administrator of nearby Holy Angels Parish in Avenue and Sacred Heart Parish in Bushwood, offered the invocation and benediction.

Beforehand, Heather Francisco, the principal of Father Andrew White, S.J. School, said their school community is proud to be named for that pioneer priest, and she noted the significance that the colonists’ landing in Maryland happened on the feast of the Annunciation, commemorating when Mary said “yes” to being the mother of God’s son.

“Jesus won our freedom,” she said, praising the colonists for first participating in a Mass when they landed in their newfound haven for religious freedom. “It speaks to the fact their faith was strong and something they relied on, as I imagine they left everything they knew to come here in the interest of worshipping God in their own way.”