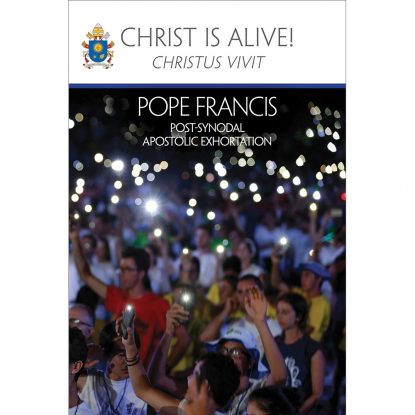 The cover of Christus Vivit (Christ is Alive!), the apostolic exhortation published April 2 by Pope Francis on the concerns of youth in the church.

Archbishop Charles Chaput was one of two American bishops who called Pope Francis’ new letter on youth “a wonderful summons to the church to more vigorously invest in youth and young adults, especially those on the peripheries and those disconnected from the church.”

The Philadelphia archbishop, who is chairman of the Committee on Laity, Marriage, Family Life and Youth for the United States Conference of Catholic Bishops, and Cardinal Joseph Tobin of Newark, chairman of the USCCB Committee on Clergy, Consecrated Life and Vocations, released a joint statement April 2 on the same day as the release of the pope’s apostolic exhortation, Christus Vivit (Christ is Alive!).

The document follows the synod of bishops held in Rome in October 2018 on the topic of young people, the faith and vocational discernment.

“The church of the United States welcomes this teaching from Pope Francis as the fruit of the synodal journey in which we walked with and listened to young people,” the chairmen said. “We encourage all Catholic leaders to read and study this exhortation and the pertinent documents of the Synod. They provide for us a framework from which we can build upon in our dioceses, parishes, and communities.”

They urged the church to “turn our attention to our young people and engage them as ‘protagonists’ of the church’s mission. Their insights can help us grow as a church and guide us as we all learn to become better missionary disciples in an intercultural and intergenerational context.”

The bishops said they look forward “to the journey ahead” and in working with “Catholic ministry leaders already working alongside young people.”

They prayed with St. John Paul II, “a patron of young people whose passing we remember today, for the church’s ongoing mission to all generations.”

Pope Francis began the synodal process of studying the church’s engagement with young people in 2016. After two years of consultation by episcopal conferences, movements and Catholic organizations, along with a worldwide online survey and a pre-synod meeting with young adults in March 2018, the General Assembly of the Synod of Bishops met in October 2018.

“Bishops, clergy, religious and lay people, including a number of young people, together with Pope Francis addressed the challenges facing younger generations today and ways in which the church can best respond,” Archbishop Chaput and Cardinal Tobin said. “Now the work of the Holy Spirit, manifest in the sessions of the synod, will bear fruit in the dioceses of the United States.”

Christus Vivit may be ordered online in English and in Spanish, along with other pertinent books and resources, through the USCCB.

NEXT: People of faith seen as key to creating more humane correctional system