Muslim father, ‘wanting to be part of something,’ joins Catholic Church 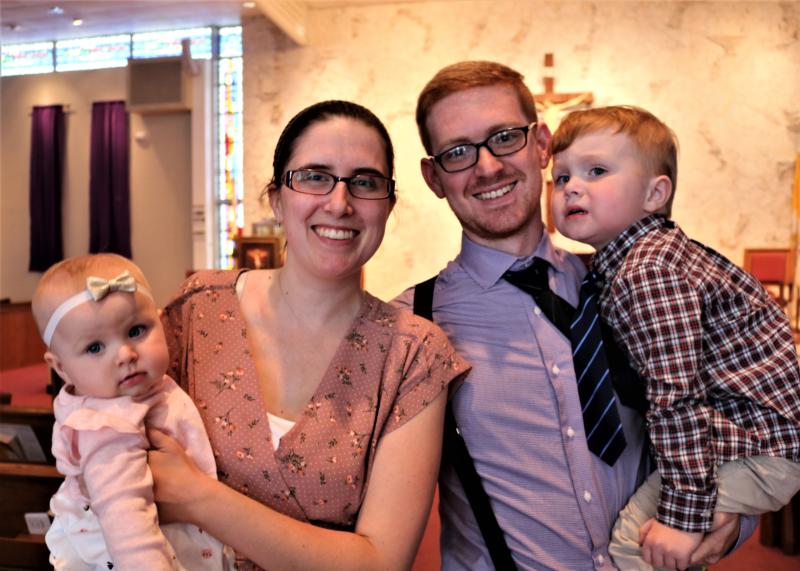 Christopher Booty, and his wife, Kristin, who attend Mass at Blessed Sacrament Church in Oakland Park, Fla., are shown with their babies, Catherine, and Maythan, March 24, 2019. The family, who are Muslims, will be converting to Catholicism during the Easter Vigil April 20. (CNS photo/CNS photo/Linda Reeves, Florida Catholic)

OAKLAND PARK, Fla. (CNS) — After questioning the Islamic tradition he had practiced for a few years, Christopher Booty delved into its history and explored other world religions — which eventually led him to Catholicism.

During the Easter Vigil April 20, he and his wife, Kristin, will be baptized at Blessed Sacrament Church in Oakland Park, along with their 8-month-old daughter, Catherine, and 3-year-old son, Maytham.

Christopher, 28, and Kirstin, 27, married five years ago. He grew up without spiritual guidance, and as a teen, explored various organizations.

“Growing up without religion, without a community of people, I wanted to be part of something,” explained Booty, who said he did one semester of college and dropped out. “I was working at some dead-end jobs. I didn’t have a vision. I was looking for someone to tell me how to lead a moral life. In 2012, I became a Muslim.”

Kristin is from a tiny village in the Canadian mountains and was raised agnostic. Growing up without faith and with the belief that it’s impossible to know whether there is a God or a future life, she said she always felt she needed something more solid, something more concrete.

In her third year at the University of British Columbia, she began looking for a group to belong to. “I was always looking for ways to be accepted by my peers,” she said. “I jumped around to different communities. I tried an atheist community and Buddhism. I found the Muslim community on campus.”

Christopher and Kristin met through Facebook. They continued to have conversations online and through Skype, and at the end of 2013, they finally arranged a meeting near the Canadian-U.S. border. It was love at first sight and they felt like it was a solid match.

Months later, they married. Kristin moved to South Florida to begin life with her husband. She joined Christopher’s Muslim community. But adjusting to life in Florida was difficult for Kirstin, who came from a town of little over 1,000 people. Christopher worked several low-paying jobs and then, returned to school to further his education. They were living with his parents to save money.

The couple said they found it increasingly difficult to live the Islamic lifestyle that includes guidelines and directions for virtually every aspect of life from socializing to praying five times a day.

But when they slipped away from the faith tradition, they felt guilty and alone.

Christopher struggled with the Islamic God he knew, the God of Abraham, but a God of conditional love. He also began reading about the prophet Muhammad, the founder of Islam.

He dug a little deeper and went back further in history tracing the roots of Christianity and the ministry of Jesus filled with healing, love, compassion and mercy. “Even though that was 2,000 years ago, the historical documents are there. You see something is going on. They are talking about Christ,” he said.

He began to rethink his Islamic religious practices and considering a spiritual alternative. “I started thinking: ‘Is this what I want to pass onto my kids?'”

Kristin and Christopher visited Blessed Sacrament a year ago, after finding the parish’s welcoming website online.

“They came to us last year and they stayed with us,” said Deacon John Okragleski of the parish. “They kept coming and they stuck with us through the summer.”

Christopher and Kristin felt like the parish was what they had been seeking all these years. “I felt welcomed,” Christopher told the Florida Catholic, newspaper of the Archdiocese of Miami. “We had people talking to us.”

The couple entered the Rite of Christian Initiation of Adults in September and began the journey to the Catholic Church slowly, first learning more about the beliefs and practices and continuing to discern whether to embrace the faith.

The Bootys’ story is unusual and with a good spin. In the past year, Christopher went back to his own roots and history. His parents did not practice faith, but his mother was born to a Methodist family and his father was a Catholic.

Christopher’s grandparents, on his father’s side, were both Catholic and he remembers going to Mass with them. His great grandfather was a building superintendent at the Basilica of the National Shrine of the Immaculate Conception in Washington. On a recent trip to Washington, Christopher and his wife saw his grandfather’s name is inscribed on a memorial wall at the national shrine with hundreds of other names.

“We went to a Mass there. That was a moment for me. I remember standing there and crying,” said Christopher.

“It is important for my children to be raised as Christians,” he said. “We live in this very dangerous culture. Kristin and I grew up with no guidance, no identity to faith.

“Things have gotten a lot better since we came to Blessed Sacrament,” he said. “We have a brighter future and we have hope.”

Reeves writes for the Florida Catholic, newspaper of the Archdiocese of Miami.

NEXT: Fordham University senior dies after fall from bell tower on campus