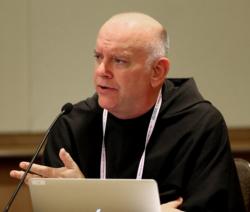 STEUBENVILLE, Ohio (CNS) — Franciscan Father Sean O. Sheridan, president of Franciscan University of Steubenville since 2013, said that “after a great deal of prayer,” he submitted his resignation to the university’s board of trustees.

“I feel called to continue my service to the Catholic Church in another capacity,” he said in a statement released by the university April 8. He said his new assignment would be “determined in consultation” with the minister provincial of his religious order, the Franciscan Friars of the Third Order Regular.

“I will miss my brother friars, the extended Franciscan University family and the great community surrounding it, but this is an appropriate time for the board to initiate a search for a new president who will be available to welcome the incoming class this fall,” Father Sheridan said.

He submitted his resignation to the board of trustees April 5. The board accepted it and announced it will begin the search for its seventh president immediately. Father Sheridan said he would remain at Franciscan University until the end of the current academic year.

University officials said they expect a new president will be in place by the beginning of the fall semester.

“We are thankful for Father Sheridan’s years of leadership and dedication throughout which he continued the Franciscan University tradition of exceptional education grounded in a passionately Catholic faith that enables our alumni to evangelize and transform the culture,” said Franciscan Father Malachi Van Tassell, chairman of the board of trustees.

He also launched the Catechetical Institute, which reaches over 100 dioceses in the United States, as well as dioceses in Africa and Eastern Europe. The institute offers courses, conferences, advice and resources for clergy, parents “and all those responsible for the work of catechesis and evangelization,” according to its website.

He also hosted three symposia celebrating the 25th anniversary of “Ex Corde Ecclesiae” (“From the Heart of the Church”), an apostolic constitution issued in 1990 by St. John Paul II that outlines the identity and mission of Catholic colleges and universities and provides universal norms to ensure colleges maintain these standards.

“Franciscan University is a special and immensely spiritual place, and it was a blessing to serve in our mission to educate, evangelize and send forth joyful disciples of Jesus Christ,” Father Sheridan said in his statement. “This is and always will be a university dedicated to providing an education that is rigorous and demanding, vibrant and truly orthodox with an unwavering commitment to Catholic faith and tradition.”

He remarked that he will continue to be inspired by the “sincerity and seriousness” that Franciscan University students have about their Catholic faith. The priest also said he was especially thankful to his fellow friars for their “ministry and witness.”

“In my years in higher education, as student, faculty member and researcher of ‘Ex Corde Ecclesiae’ and the Code of Canon Law, I have not encountered members of a university community so committed to pursuing their beliefs,” he added. “I leave Franciscan a better teacher and catechist and appreciative of the time to grow in this area of my ministry.”

Father Sheridan noted that any university president “would readily admit that all the days are long; many are great days and some are difficult.”

But he added, “Being a Franciscan friar has taught me to recognize that all those long days — the great days, and even the difficult days — are blessed days and all the more so when I am among my Franciscan family.”

NEXT: Put needs of survivors first, not strictly the law, panelists urge church