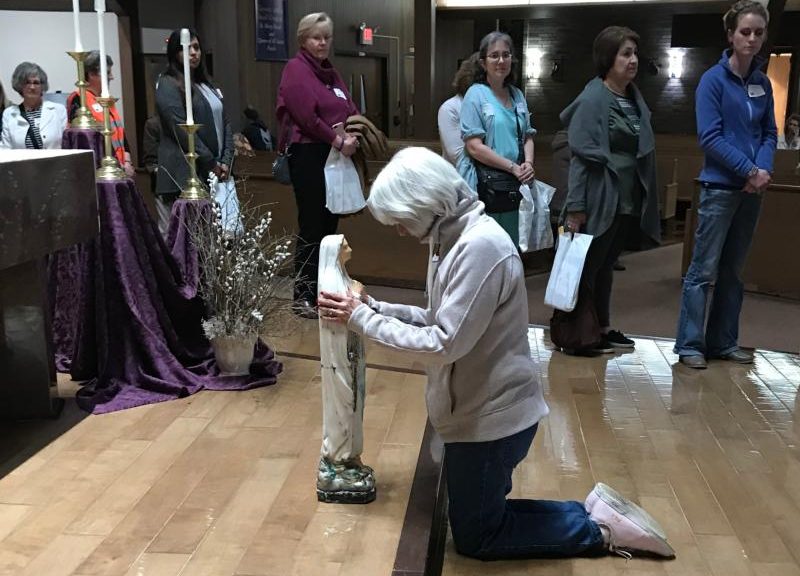 Lucy Chocholek of St. John the Baptist Parish in Whiting, Ind., prays before the statue of Broken Mary at the Northwest Indiana Catholic Women’s Conference at Queen of All Saints Church in Michigan City April 6, 2019. (CNS photo/Laura Ieraci, Horizons)

MICHIGAN CITY, Ind. (CNS) — For the second year in a row, nearly 600 women participated in the Northwest Indiana Catholic Women’s Conference, organized by the Diocese of Gary.

The program for the daylong event, held April 6 at Queen of All Saints Church, included three well-known Catholic authors, who offered personal testimony and theological instruction about how God leads people to wholeness.

Sister Miriam James, a member of the Society of Our Lady of the Most Holy Trinity, who is the host of a show on Catholic radio and the author of “Loved as I Am,” led the morning program by encouraging participants to surrender their suffering to God’s healing grace. She said being honest with herself about her past wounds and surrendering them to God allowed her to recover from alcoholism and heal from child sexual abuse.

“These were chapters I didn’t want to own in my story and I just wanted them to go away. But there is a great saying in healing circles, ‘Suffering that is not transformed is transmitted,'” Sister James said.

“We all have these little parts of us that God is desiring to heal,” she added. “There is nothing in my life and in your life that is outside the boundaries of the mercy and the healing of God.”

She spoke about women’s “mom radar,” which allows them to see past polite, patent answers in daily conversation and intuit when something is wrong. She also noted how most Americans, when asked how they are doing, respond, “Good, busy.”

“Good and busy is the tip of the iceberg of a lot of things,” Sister James said. “I believe for the average person right underneath ‘good, busy’ is a whole iceberg below the water that goes down to the ocean floor that has a lot of pain. It has a lot of unspoken desire. It has a lot of areas of aching, of longings, of questions, of hopes, of triumphs, of sorrow, of all kinds of things.”

She urged participants to begin their healing process by being honest about their woundedness and going to confession.

Angela Franks, author and professor of theology at St. John Seminary in Boston, spoke about St. John Paul II’s theology of the body.

Society leads people to believe that “our bodies are not us, but separate from us,” she said. “The culture implies that our body is a problem that needs to be solved — we’re not skinny enough, we’re not healthy enough, we’re too fertile.”

She said this fractious relationship people have with their bodies was not God’s plan for humanity, but the result of not being in harmony with God.

The fall in the Garden of Eden was really “a crisis of trust” in which people learned that they had to protect themselves from other people’s “disordered desire,” she said.

The accusations against film producer Harvey Weinstein and the #MeToo Movement that followed were indicative of what happens when the relationship between men and women is governed by disordered desire, she noted.

She then urged participants to understand themselves as whole and integrated persons, knowing that body and soul will, after death, be united once again in the final resurrection.

“Everything we do in our earthly bodies exists in spirit,” she said. “And what you are doing here and now has eternal importance and eternal weight, and it really does last forever.”

Kevin Matthews rounded out the day by sharing the story of his rise as a big-time radio personality in Chicago for 20 years who was fired from four radio stations and diagnosed with a rare form of multiple sclerosis.

Though baptized Catholic, Matthews hadn’t practiced his faith for most of his adult life. During his sickness, he turned to faith, and began to carry out the promptings he believed were coming from God. One prompting led him to a statue of Mary left by a dumpster that was broken in half at the waist and covered in dirt.

“There is no such thing as a coincidence,” he said. “I took the statue home because she was broken and so was I.”

Matthews said miracles began to occur after his pastor blessed the statue, which he named Broken Mary, in his home in Grand Rapids, Michigan. He said he has since had dreams of Mary, telling him to bring her statue to the margins. As a result, it has gone to prisons, hospice care, emergency rooms and hospitals for sick children.

“She is going to where the most broken are,” he said.

Matthews has documented his story in the book “Broken Mary,” and has recorded a rosary app. His main mission now, which he said he received while in Fatima, Portugal, in 2017, is to be “Mary’s roadie” and to promote the rosary, especially among young people.

The message of Fatima “is important, if not more important than it ever has been,” he said.

One participant, Jackie Keenan from Dyer, Indiana, said the conference offered answers to some of her struggles as a wife and mother of two.

“Today just by surrendering a bit and really listening and being able to tune into the Holy Spirit. … I got some help with what I’ve been trying to chip away at. I think there are deeper things that I really believe God helped me tune into today,” she said.

Keenan attended the events with her mother and her friend Jackie Brady of St. Edward Parish in Lowell, Indiana.

“It’s my first women’s conference,” said Brady, “and I loved seeing so many women coming together for the same purpose, to get to know the Lord better and to become a better version of themselves.”

PREVIOUS: Volunteer crew prepares oils to be blessed at chrism Mass in Indianapolis

NEXT: President of Franciscan University resigns; search underway for successor