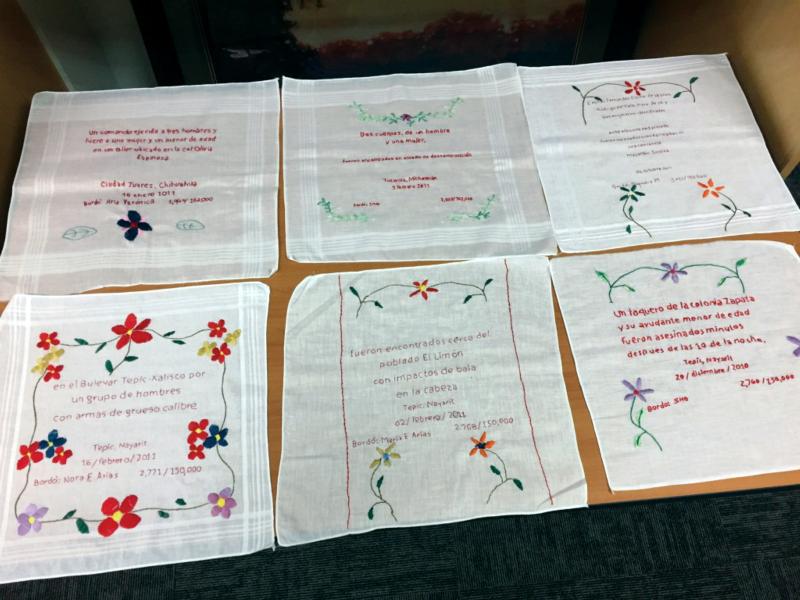 These handkerchiefs, known as “bordados” in Spanish, were embroidered by Utah Sisters of the Holy Cross and associates of their congregation to commemorate victims of the drug war with Mexico, those who have died crossing the border while seeking sanctuary and others who have suffered violence. (CNS photo/courtesy Sister Veronica Faja)

Back in 2011, Fuentes Rojas (Red Fountains) originated in Mexico City. The original purpose of this collective project was to raise a voice for the victims of violence caused by the U.S.-Mexico drug war.

As the years passed, Fuentes Rojas formed Bordados por la Paz (Embroidering for Peace) with the idea of creating a memorial for each of the victims, widening their focus to victims of feminicide, forced disappearances, and individuals who have died crossing the desert seeking sanctuary in the United States.

The movement has spread all over the world, and on April 14, 2018, members of the Congregation of the Sisters of the Holy Cross in Mexico and the United States decided to start making embroidery pieces for the cause.

“The Sisters of the Holy Cross got hold of Valerie James, who is one of the initiators of this effort,” said Holy Cross Sister Veronica Fajardo, one of the sisters and associates of Utah who have participated in the effort.

After a presentation from James, several sisters from Mexico and the U.S. each made an embroidered piece commemorating the people who have died to the violence.

Each piece displays information from police reports about the victim’s death in words that are hand-embroidered with red thread on a man’s white handkerchief. The information is embroidered in Spanish.

The handkerchief was specifically selected as the background for the message because it is used to dry the tears of those mourning the loss of a loved one.

On May 5, 2018, Holy Cross sisters in Utah invited the associates, who are laypeople associated with the Holy Cross congregation, to join the project. They selected the theme “Bordados for peace and memory.”

In addition to Sister Veronica, the associate leadership team is comprised of Holy Cross Sisters Catherine Kamphaus, associate superintendent of Utah Catholic Schools, and Genevra Rolf, who is retired. Others on the team are Kandie Brinkman, Jakie Capella and Mary Beth Vogel-Ferguson. A number of other Holy Cross associates in Utah are participating.

Some of the embroidered pieces already have been completed; others are still in process.

“When we finish them, we send them back to James, and she delivers them to Fuentes Rojas in Mexico,” Sister Veronica told the Intermountain Catholic, newspaper of the Diocese of Salt Lake City.

All the embroidered handkerchiefs will be displayed in May in Coyoacan, a plaza in Mexico City.

Each piece will be numbered and also include the total number of pieces made up to that date.

Another reads: “An armed group killed three men and hurt a woman and a child in a workshop located in Olivia Espinoza, Juarez City, in Chihuahua.”

“With every stitch, we remember these victims,” Sister Veronica said.

From 2012 to 2018, Mexico’s National Institute of Statistics, Geography and Information reported 139,758 intentional homicides, an average of over 23,293 people per year, more than 55 people per day, or just over two people every hour. “No other country in the Western Hemisphere had seen such a large increase either in its homicide rate or in the absolute number of homicides,” according to the organization’s Web page.

In the 2018 fiscal year, 283 deaths were registered by the U.S. Border Patrol, according to the Pew Hispanic Center. In the past 10 years alone, some 2,000 migrants — men, women, children and the elderly — have died this way.

A 2017 joint report from the National Women’s Institute in Mexico and U.N. Women highlighted the increase of feminicides, from an annual rate of 3.8 per 100,000 women in 1985 to 4.6 in 2016. The National Citizen Observatory on Feminicide released figures that there were 800 feminicides between January and June 2017.

Vallejo is on the staff of the Intermountain Catholic, newspaper of the Diocese of Salt Lake City.

PREVIOUS: Much to do, and do right, on child sexual abuse, archbishop says