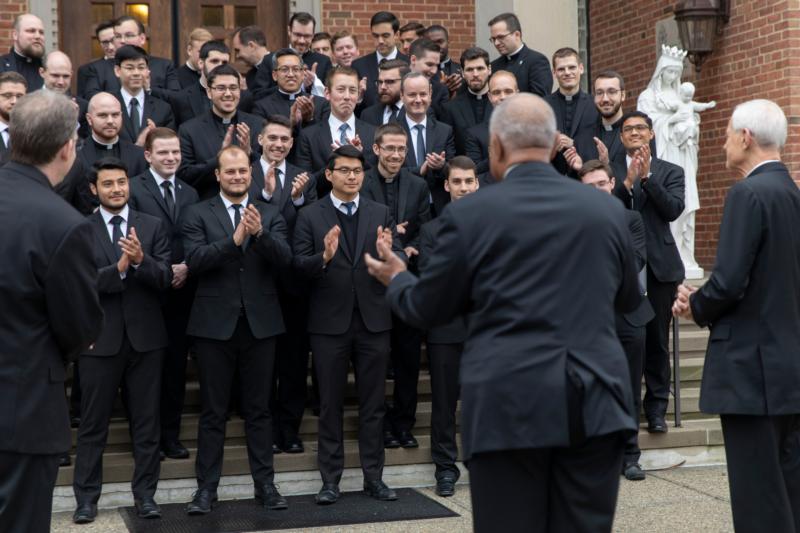 Seminarians of the Archdiocese of Washington greet Archbishop Wilton D. Gregory as he arrives at the St. John Paul II Seminary for a visit April 5, 2019, the day after Pope Francis named him as the new archbishop of Washington. At left is Msgr. Robert Panke, the seminary’s rector, and at right is Cardinal Donald W. Wuerl, retired archbishop of Washington, who has served as apostolic administrator of the archdiocese, and is the seminary’s founder. (CNS photo/Jaclyn Lippelmann, Catholic Standard)

WASHINGTON (CNS) — As they did when Pope Francis arrived to visit the Archdiocese of Washington’s St. John Paul II Seminary in 2015, the seminarians and priests stood on the steps at the seminary’s front entrance and applauded as Archbishop Wilton D. Gregory arrived for his first visit April 5, one day after Pope Francis had named him as the new archbishop of Washington.

Archbishop Gregory was joined by his predecessor, Cardinal Donald W. Wuerl, who served as Washington’s archbishop from 2006 until 2018, and since last fall has served as the archdiocese’s apostolic administrator. In 2011, Cardinal Wuerl founded then-Blessed John Paul II Seminary, the first seminary in the United States named for that pope. Its name changed to St. John Paul II Seminary when the pontiff was canonized in 2014.

Moments after greeting the seminarians, the archbishop processed into the seminary’s chapel to celebrate Mass, joined by Cardinal Wuerl and priests who serve as seminary faculty members, including Msgr. Robert Panke, the seminary’s rector.

About 60 seminarians attended the Mass, including those in residence at the seminary, and archdiocesan seminarians studying at nearby Theological College at The Catholic University of America, and at the archdiocese’s Redemptoris Mater Seminary in Hyattsville, Maryland.

In welcoming the archbishop, Msgr. Panke said: “We have been praying for you since before you were asked” to become archbishop. He said they are praying for him now and will continue to do so as he prepares to lead the archdiocese.

“This is a very special moment. It’s a great joy,” Cardinal Wuerl told the seminarians, adding that Archbishop Gregory “will become now the father of this house and the spiritual father of all of you.”

Archbishop Gregory addressed the seminarians as “dear young brothers” and told them his past two days had been busy meeting with people in the archdiocese, but he had asked to visit the seminary because he wanted to “demonstrate my closeness to you as your new archbishop and as someone who was in the seminary and taught in a seminary.”

Washington’s newly named archbishop — who served as the archbishop of Atlanta since 2005 — participated in a press conference April 4 just hours after the Vatican announced his new appointment, then celebrated Mass at the Archdiocese of Washington’s Pastoral Center in Hyattsville, Maryland, for employees there and had lunch with them, before attending meetings and briefings with archdiocesan staff members.

Prior to visiting the seminary late in the afternoon of April 5, Archbishop Gregory had visited the headquarters of the archdiocese’s Catholic Charities agency, St. Anthony Catholic School and the Jeanne Jugan Residence for the elderly poor operated by the Little Sisters of the Poor.

In his homily during the Mass with the seminarians he said: “Today I feel very close to this community, even though this is my first time to visit and pray with you.” He also said he knows the importance of seminaries for “the future life of the church.”

Stressing the need to seek holiness, Archbishop Gregory said, “One thing I must do is find a spiritual director in the Archdiocese of Washington.”

The archbishop said he had always selected veteran priests whom he loved and respected to serve as his spiritual directors. “Since becoming a bishop, I have buried three spiritual directors,” he said before jokingly adding: “I don’t think it was because of the journey of my soul or my sinfulness.”

“We all need a spiritual guide on our life journey, someone who will walk with us, and help us pursue holiness and justice,” he said. “We need someone in our life to walk with us, guide us, correct us (and) challenge us as we continue to seek the Lord Jesus.”

After Mass, Archbishop Gregory joined the seminarians and priests for dinner at the seminary, before concluding his day by visiting a fish fry at Nativity Parish in Washington.