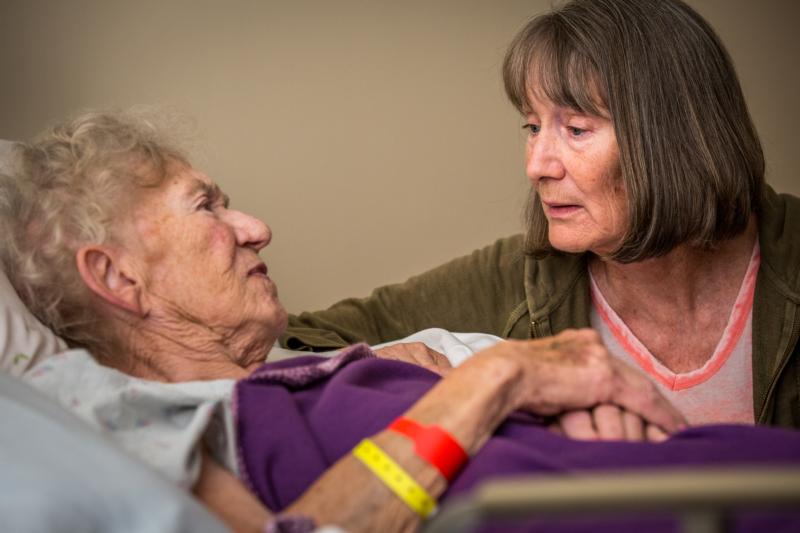 A woman sits at the bedside of her mother at de Greeff Hospice House in St. Louis Oct. 24, 2016. Democrats and Republicans in Congress have introduced bills that would allow workers to take up to 12 weeks of paid family leave, pointing to the recognition by both political parties that such a benefit would help families. (CNS photo/Lisa Johnston, St. Louis Review)

WASHINGTON (CNS) — Polls of workers, surveys of employers and even informal conversations on Capitol Hill show strong support for a formal paid family leave policy. Getting there is a different story.

Three bills have been introduced in Congress in recent weeks: two similar Republican versions that allow new parents to access Social Security benefits after the birth or adoption of a child, and a more expansive Democratic proposal — around since 2011 — that would establish a small tax on employers and employees to fund leaves for childbirth and adoption, personal illness and caring for a sick family member.

The bills call for a benefit equal to two-thirds of their existing salary, enough to make it worthwhile to take leave without placing a financial burden on families.

Specifics aside, the bills show that both parties have come to recognize that paid family leave is a pro-family — and even a pro-life — measure whose time has come.

While workers have been able to take up to 12 weeks of unpaid leave annually without losing their job under the Family and Medical Leave Act of 1993, they faced financial stresses because of the loss of income.

Evidently, members of Congress have been hearing those concerns.

It should be noted that the United States is the only country of the 36 members of the Organization for Economic Cooperation and Development without a formal paid family leave provision for workers. The U.S. Bureau of Labor Statistics reported in March 2018 that 17% of workers had access to paid family leave and 89% could take unpaid family leave.

“There are a number of plans out there,” acknowledged Sen. Joni Ernst, R-Iowa, who has introduced the Child Rearing and Development Leave Empowerment Act, or CRADLE Act, with fellow Republican Sen. Mike Lee of Utah. “Some will be how you pay for it. Is it a tax or through Social Security, as it is in ours?

“But what I agree with, it shows the fact that we’re all very concerned about this and that we are hearing the same thing from our constituents,” she told Catholic News Service.

The second Republican bill, the New Parents Act, was introduced in the House by Rep. Ann Wagner of Missouri and Rep. Dan Crenshaw of Texas, and in the Senate by Sen. Marco Rubio of Florida and Sen. Mitt Romney of Utah. Spokesmen for Wagner and Rubio, who are Catholic, said they were unavailable for comment.

The Republican bills would allow workers to access Social Security benefits for a up to three months in exchange for a delay in retirement or a temporary reduction in benefits at retirement.

Ashley McGuire, senior fellow at the Catholic Association and a member of the Bipartisan Policy Center advisory council on paid family leave, said she sees the Republican versions as a starting point. Parents, she said, deserve a full 12 weeks that the bills set for paid leave for the birth or adoption of a child.

“I’m of the view let’s start with parental leave. The broader all-encompassing policy really widens the net and includes a whole lot of other conversations. If we want to get something done, we have to have a realistic horizon,” she said.

If paid family leave becomes national policy it will serve to recognize that the importance of family in society, added McGuire, 33, a mother of three.

“One of (society’s) most important roles is to safeguard the family and create an environment where families can flourish. Paid family leave is an essential part of the that,” she said.

Kalob prefers the broader Democratic bill because it would allow leave beyond the birth or adoption of a child. He called it “a true sort of family leave” that falls closer in line with Catholic social teaching and its concern for the common good.

That bill, the Family and Medical Insurance Leave Act, or FAMILY Act, has been introduced by Rep. Rosa DeLauro of Connecticut in the House and Sen. Kirsten Gillibrand of New York in the Senate. Both are Catholic. Gillibrand, who is running for president, has introduced the same bill since 2011.

The three bills recognize the everyday concerns of families even though they approach the issue from differing perspectives, said David Cloutier, associate professor of theology at The Catholic University of America.

Cloutier compared the Republican bills with the Catholic principle of subsidiarity, in which decisions are made at the most local level possible, which in this case is the family.

The Democratic bill could be said to align more closely with the Catholic principle of solidarity in that it would more broadly serve people’s needs, he explained.

With compromise, the bills could meet both church principles and more closely address the common good, Cloutier told CNS.

Ernst said she was willing to meet with Democrats to hammer out a compromise, but that “it will take a while before all of us can bring our plans together.”

Meanwhile, the U.S. Conference of Catholic Bishops and Catholic Charities USA have not weighed in on the legislation. Spokesmen for both agencies said the bills are under review.

PREVIOUS: Singer-songwriter trades in secular success to share his faith in music