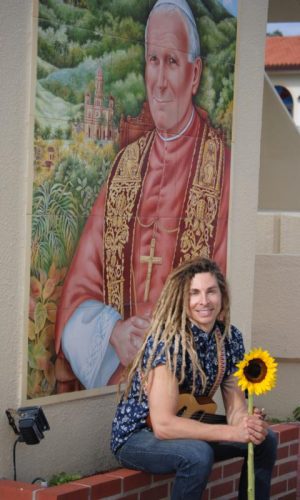 Catholic singer-songwriter Zander, as he is known on stage, poses outside Miami’s National Shrine of Our Lady of Charity in front of a mural of St. John Paul II. Though he had built a successful career as a pop/reggae artist, Zander is now trading in the ways of the world to share Jesus’ message through his music. (CNS photo/Blanca Morales)

MIAMI (CNS) — For one of the Catholic world’s up-and-coming worship leaders, the church once seemed boring and “too serious.”

But now, Zander, as he is known on stage, is changing his tune. A conversion experience led him to gain a new perspective on Catholicism.

“So many people think Catholicism is a guilt religion, as if we can’t dance, smile, or have fun — but we can!”

Though he had built a successful career as a pop/reggae artist, Zander is now trading in the ways of the world to share God’s message through his music.

Born in Hong Kong to American and Irish parents, Zander and his family have lived around the world. As a child, Zander learned to play classical piano, indulging the works of composers such as Chopin, while listening to diverse music, like the Peruvian pan flute. Not long after classical training in piano, he picked up a guitar and began to rock out.

His career as a singer-songwriter took off upon graduating from college. He soon shared the stage with artists such as Train, Ziggy Marley and Fall Out Boy, and the Wailers.

Throughout the years, Zander has gained an international following through gigs around the U.S., as well as tours in South America and Australia.

Despite the surfing and sunshine infused in his music videos, he found “the good life” was riddled with shadows.

“The world is becoming a gnarlier place. The music world is becoming darker,” he said, describing the current trends of yoga, crystals and other New Age practices that abound among concertgoers. “There’s a lot of darkness, despite the so-called ‘good vibes.'”

Two years ago, various trials forced him to look for a beacon, and he found a guiding light in the faith.

“I had many struggles during that time with my career and relationships,” he said. Though he had received his sacraments of initiation — baptism, first Communion and confirmation — when he was growing up, he and his family were “Christmas Catholics.” He found it difficult to relate to Mass.

When a good friend died, it led to quiet moments of prayer at the beach, opening his heart to God.

After a great experience in reconciliation during Lent, Zander returned to the Catholic Church and dove right into it. He began to learn more about the faith through daily Mass and prayer, as well as spiritual books.

While he continued to focus his lyrics on positivity and a life of gratitude, the subtle hints of his newly embraced faith seemed to fall on the deaf ears of a nonreligious audience.

“The reggae audience is all about getting as high as possible. It’s difficult to reach people when they are blasted,” he said.

Zander then decided to place his career into God’s hands.

“First and foremost, I want to give glory to God with my gifts. I want people to understand the joy he brings us — we’re an alleluia people! If we open ourselves up to him, he shows us the way.”

But he’s not just singing. He has been sharing his personal story at various events around the country. His talks focus on seeking joy in life, the importance of daily prayer and Marian devotion.

Zander’s songs now feature Catholic themes and prayers, many of which are inspired by the writings of the saints.

“I love (‘Jesus Alone’) because the lyrics are so simple yet so profound. ‘Jesus alone is all I need …’ As a priest, working with a lot young people, I think what helps so much in the spiritual life is to have songs we can repeat during the day,” said Father Ryan Richardson, a spiritual director for college students and young adults in Dallas.

The song is a prayer of surrender to the will of God.

“I think that is challenge we can have: abandoning ourselves, our own control over our life events, and really giving that to the Lord,” added Father Richardson.

Since December — when Zander decided to offer his music to God — doors have flung open. He has played at XLT in Atlanta, SEEK 2019 in Indianapolis and the Young Catholic Professionals Conference, along with other events in several dioceses.

Zander’s dreadlocks — which have become his signature look in the decade he’s had them — bring a different style to the Catholic scene.

“I know I have a unique look. But I also want others to know how unique they are. We can be individual as we follow God’s will for us. I have felt that on this journey back to the faith. That’s what I want to share: We can bring glory to God through our individuality.”

However, his music’s arrangements, with their influence in various genres, are what some are calling “a breath of fresh air” in the Christian worship scene.

“So many Christian artists sound the same, to the point of confusion,” said Brandon Azan, a young adult Catholic from Miami. “There’s nothing quite like him out there, to my knowledge.”

Being from the Caribbean, Azan instantly recognized the distinct rhythms and melodies in which Zander’s music takes root. “He manages to have a distinct sound while conveying a powerful spiritual message: Love God in all you do, and let his love pour over you.”

Morales writes for the Florida Catholic, newspaper of the Archdiocese of Miami.