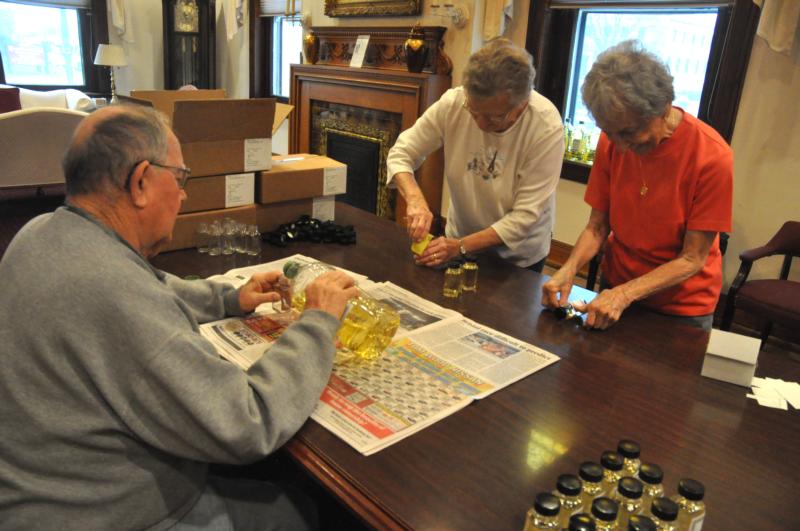 Arnold Feltz, Kathleen Feltz and Anna Marie, all members of St. Barnabas Parish in Indianapolis, prepare oils in the rectory of SS. Peter and Paul Cathedral Parish April 8, 2019. The oils are among those that will be blessed at the archdiocesan chrism Mass at the cathedral April 16. (CNS photo/Sean Gallagher, The Criterion)

INDIANAPOLIS (CNS) — The annual chrism Mass to be celebrated April 16 at SS. Peter and Paul Cathedral in Indianapolis will arguably be one of the most solemn and joyful moments of worship this year for the Catholic Church in central and southern Indiana.

Priests serving in the archdiocese will renew their ordination promises. And Archbishop Charles C. Thompson also will bless oils to be used in sacraments across the Archdiocese of Indianapolis.

Every celebration of baptism, confirmation, the anointing of the sick, priestly ordination, and church or altar dedication in the archdiocese in the coming year will involve oils blessed at this Mass, which is open to the public.

The oils so joyfully and solemnly to be blessed at the chrism Mass were prepared by volunteers in a rather simple way at the cathedral rectory April 8.

For 27 years, Christina Tuley, executive assistant in the archdiocesan Office of Worship, has overseen a crew of volunteers who annually pour more than 20 liters of olive oil into 750 small bottles and place lids and labels on them. One bottle of each of the three kinds of oils — the oil of catechumens, the oil of the infirm and chrism oil — are then put in small boxes.

They are blessed during the chrism Mass and then distributed to Catholics taking part in the liturgy who take them back to their faith communities across central and southern Indiana.

“We’re preparing the oil for every child that is baptized, for every priest that is ordained, the churches that are built, and for the catechumenate, and the oil of the infirm goes for the sick,” Tuley told The Criterion, newspaper of the Indianapolis Archdiocese. “It’s very much an honor.”

Arnold and Kathleen Feltz, members of St. Barnabas Parish and the parents of Father Joseph Feltz, have helped prepare the oils for 18 years. They then attend the chrism Mass where the oils are blessed, and the celebration of the Easter Vigil at their parish where the oils are used to receive people into the church.

“It’s moving and rewarding,” said Kathleen. “It makes our service and us being able to do it all a little extra special.”

Karla Hudacek, a pastoral associate at St. Thomas Aquinas Parish in Indianapolis, volunteered for the first time this year. She appreciated the aromatic oils added to olive oil to give chrism oil an attractive smell.

She recalled the effect it had on her twins when they were anointed with chrism oil at their baptism.

“I could smell it for days and days,” Hudacek said. “It was a reminder of how blessed and how present Christ is. In our faith, we have some very tangible means of experiencing Christ.”

Father Patrick Beidelman, executive director of the archdiocesan Secretariat for Worship and Evangelization, stopped in to see the work of the volunteers and thank them for their service.

“They’re offering their time to enable our faith family to be who it is and do what it does by the power of the Holy Spirit,” Father Beidelman said. “You can see them putting their faith into action. It’s their love for the church, for the sacramental life of the church. And the kind sharing of their time builds up the body of Christ.”