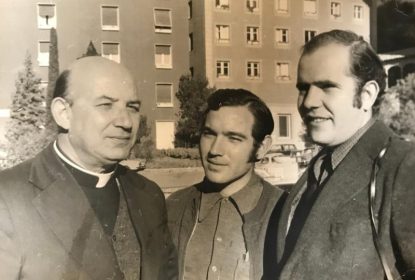 LA RIOJA, Argentina (CNS) — Bishop Enrique Angelelli Carletti traveled to a rural corner of his diocese in July 1973 to celebrate the feast of San Antonio. He was run out of town instead.

A mob organized by wealthy landowners pelted him with stones. It was their response to his promotion of worker cooperatives at a time when such concepts were criticized as communist, and anything emphasizing the “social” was seen as subversive.

Bishop Angelelli’s pastoral approach was inspired by the Second Vatican Council and Young Christian Workers Movement, but the resistance became more brazen in the ensuing years. He was murdered in a mysterious car crash in July 1976 — a crime carried out by the then-ruling military dictatorship.

The four churchmen are collectively known as the Martyrs of La Rioja. They will be beatified April 27 at a ceremony in La Rioja, 700 miles northwest of Buenos Aires in the arid Andean foothills.

Their road to beatification recalls the troubled period of military rule and church acquiescence as abuses occurred. But it also vindicates a pastoral approach since championed by Pope Francis, who, while Jesuit provincial, befriended Bishop Angelelli.

The La Rioja martyrs “are the first victims of the military dictatorship to be declared martyrs by the church,” said Mariano de Vedia, author of a biography on Bishop Angelelli. “It’s a gesture showing Francis’ commitment to the church that’s close to the poor.”

The beatifications have been greeted with muted enthusiasm in La Rioja and Argentina, however. Many locals in La Rioja still know little of the martyrs’ legacy, let alone their names.

Such is the controversy still clinging to Bishop Angelelli’s legacy and the country’s difficulties confronting the atrocities of the 1976-1983 military dictatorship, which some in the church hierarchy supported and many more did not actively oppose.

“Argentina is a country looking more at the past than to the future and more open to controversies than agreements,” said Jose Maria Poirier, publisher of the Catholic magazine Criterio.

“He is considered a socially minded bishop, very concerned with people’s issues, very critical of the military dictatorship and, with few exceptions, the Argentina episcopate didn’t defend him,” said Poirier.

Bishop Angelelli was born in Cordoba, 250 miles southeast of La Rioja, in 1923. He entered the minor seminary at age 15, studied in Rome and was elevated to bishop by St. John XXIII in 1960.

He participated in the sessions of the Second Vatican Council and the 1968 Latin American bishops’ council meeting in Medellin, Colombia, where the bishops proposed “a preferential option for the poor,” a principle unpopular with Argentina’s hierarchy, according to observers.

After Vatican II, the bishop returned to Cordoba, where he was an auxiliary, to implement new pastoral approaches, though his archbishop was not on board.

Bishop Angelelli “understood the Vatican II and its challenges,” said Delfor Brizuela, a former priest and current human rights director in La Rioja’s provincial government. “But he didn’t really fulfill a bishop’s role” in Cordoba, where “they sent him to a parish like any other priest, but (as) a bishop.”

The bishop was appointed to La Rioja in 1968. He was sent there “as if it were the end of the world,” Brizuela said, as the province was one of the poorest and least influential in Argentina, while social conditions were “semi-feudal.” But he embraced the appointment and saw it as an opportunity to put the preferential option for the poor into practice.

Some of the changes were symbolic: He removed the names of the wealthy from the pews they reserved for themselves in the cathedral, where many poor Catholics preferred not to attend. He embraced popular piety, celebrated Christmas Eve Mass in poor pueblos and did not mind churchgoers not wearing their Sunday best.

Bishop Angelelli criticized injustices, but also promoted ministries for young people and for improving women’s equality in a bastion of machismo, said Sister Maricarmen Paruas, who worked with the late bishop.

“He valued women and valued women religious,” Sister Maricarmen said. “As women, as religious, he gave us opportunities to work in his pastoral projects as equals.”

His pastoral approach attracted priests and religious wanting to put Vatican II into practice. Sister Maricarmen, 87, arrived in La Rioja from Spain in 1970 with the Religious of the Assumption congregation.

“When we came here, we saw the possibility of living a different church with a different bishop. We saw the prospect of working in barrios, in the midst of the people, and we stayed,” she said.

Though denounced as communist by the gentry and attacked mercilessly in the press, Bishop Angelelli “received the rich, the same as the poor,” and “was able to forgive his worst enemy,” Sister Maricarmen said.

Many of the bishop’s conflicts with the wealthy stemmed from his promotion of worker-run co-ops.

Rafael Sifre, a collaborator in the rural movement supported by Bishop Angelelli, recalls an attempt to form a co-op to work the land of a vineyard owner, who had died. But resistance from local landowners was ferocious, to the point Sifre was kidnapped three times and the bishop was pelted with stones and accused of storing explosives in the local parish, he said.

Pedernera worked in the cellar of winery in Mendoza province, but moved to La Rioja to join Bishop Angelelli’s rural movement. He also tried to form a co-op — The Lucky Star to grow crops such as melons, tomatoes and peppers — but also encountered resistance from landowners and the military dictatorship.

Susana Pedernera, one of his three daughters, recalls constant harassment and espionage — to the point vehicles, driven by spies dressed as women, would pass by the family’s farm. Wenceslao Pedernera was a catechist in the local parish and would “read a page from the Gospel after work,” his daughter recalled.

But when he read the Bible, “People distanced themselves” and called him “communist” and “extremist,” she said. “That’s when problems started.”

On the night of July 24, 1976, gendarmes pulled Wenceslao Pedernera from his home, at gunpoint, and beat him badly. He died of his injuries.

Six days earlier, Fathers Longueville and Dios Murias also were taken violently as they ate supper with a congregation of women religious. Their bodies were found beaten by railway workers.

“They tried to silence the bishop by killing those close to him,” said Sifre, who was sent to Europe for his own safety. “He was persecuted for a church that tried to live the Gospel.”

Few in the Argentine bishops’ conference backed Bishop Angelelli. The Jesuits — whose Argentine provincial was then-Father Jorge Mario Bergoglio — held a retreat in La Rioja and, when the seminarians were sent away to study for their safety, the Jesuits welcomed them at their school in suburban Buenos Aires.

On Aug. 4, 1976, Bishop Angelelli was returning to La Rioja after celebrating a novena as part of the funerals for Pedernera and the two priests. His vehicle was run off the road by assassins in what was supposed to look like an accident. In 2014, two military commanders were found criminally responsible for his death.

Sister Maricarmen recalls Bishop Angelelli telling her on the eve of his murder, “They’re closing in.” She urged him to leave, but he refused.

“My place is here alongside my people,” he said. “How can I leave my flock without a shepherd?”