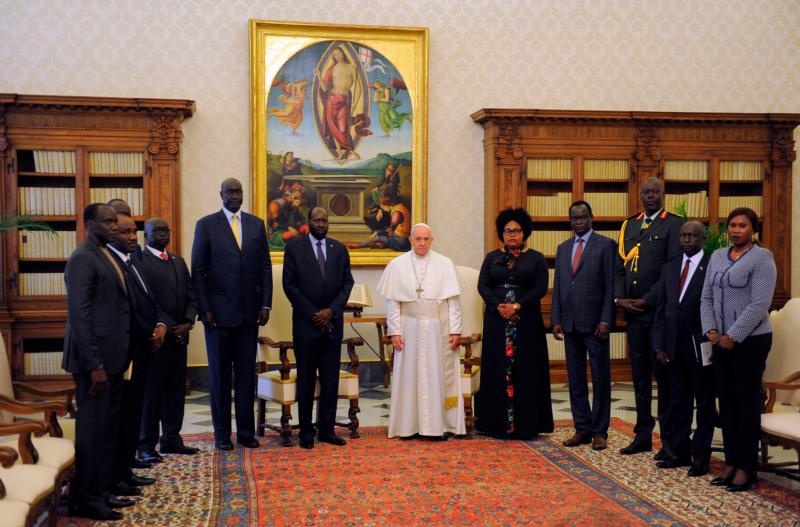 VATICAN CITY (CNS) — To help bring lasting peace to a nation scarred by civil war, Pope Francis was scheduled to speak with and bless leaders from South Sudan gathered for a spiritual retreat at the Vatican.

“The highest civil and ecclesiastical authorities of South Sudan will participate” in the retreat April 10-11 in the Domus Sanctae Marthae residence where the pope lives, Alessandro Gisotti, interim director of the Vatican press office, said in a written statement.

The retreat was the idea of Anglican Archbishop Justin Welby of Canterbury, head of the Anglican Communion, who was expected to attend.

“This event, both ecumenical and diplomatic at the same time, was organized by mutual agreement between the (Vatican) Secretariat of State and the office of the archbishop of Canterbury with the goal of offering on the part of the church a propitious occasion for reflection and prayer,” Gisotti said April 9.

The Vatican retreat, he said, also was designed as “an occasion for encounter and reconciliation, in a spirit of respect and trust, to those who in this moment have the mission and the responsibility to work for a future of peace and prosperity for the South Sudanese people.”

After the retreat, the pope was scheduled to give a speech and give participants a Bible that had been signed Pope Francis, Archbishop Welby and the Rev. John Chalmers, former moderator of the Presbyterian Church of Scotland, with the message, “Seek that which unites. Overcome that which divides.”

At the end of the encounter, “the leaders of South Sudan, who will take up the common task for peace, will receive the blessing,” Gisotti said.

Under the Revitalized Agreement on the Resolution of Conflict in South Sudan, which was signed in 2018, Gisotti said, the leaders “were to assume positions of great national responsibility this coming May 12” with a transitional government of national unity.

Church leaders attending the retreat were to include eight members of the South Sudan Council of Churches. Archbishop John Baptist Odama of Gulu, Uganda, and Jesuit Father Agbonkhianmeghe Orobator, president of the Conference of Major Superiors of Africa and Madagascar, were to lead the reflections during the retreat.

South Sudan’s five-year-long civil war has killed almost 400,000 people and displaced millions, while more than 1.5 million people in South Sudan are on the brink of starvation and more than 6 million people, half the population, face extreme hunger, according to the United Nations.