Bulgarian Orthodox: No common prayer for their clergy during papal visit 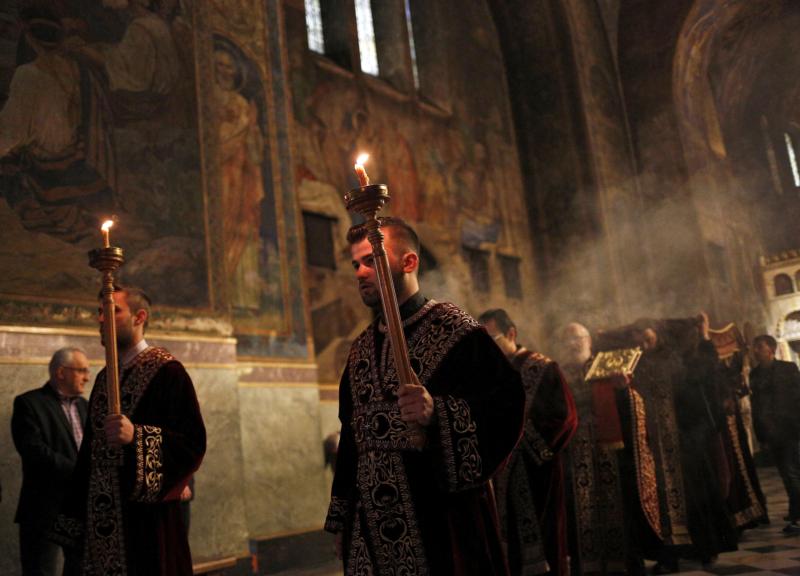 Bulgarian Orthodox men take part in a Good Friday liturgy at St. Alexander Nevsky Orthodox Cathedral in Sofia April 10, 2015. Bulgaria’s predominant Orthodox Church has ordered its clergy not to take part in prayers or services with Pope Francis when he visits the country May 5-7. (CNS photo/Stoyan Nenov, Reuters)

SOFIA, Bulgaria (CNS) — Bulgaria’s predominant Orthodox Church has ordered its clergy not to take part in prayers or services with the pope when he visits the country in early May.

“The invitation to Pope Francis comes from the state authorities, so it is appropriate that the main events are coordinated with state institutions,” the church’s 15-member governing Holy Synod said in a statement.

“Any form of service with a common liturgical or prayerful character, including the use of liturgical garments, will be unacceptable to us. Our holy canons do not permit this.”

The synod said it had agreed the ban unanimously after examining a draft agenda for the pontiff’s May 5-7 visit and would confirm it in a letter to the Vatican’s nuncio, Archbishop Anselmo Pecorari.

It said Bulgarian Orthodox Patriarch Neophyte would greet the pope with other church leaders at Sofia’s Synodal Palace and Orthodox cathedral, but said the participation of Orthodox clergy, including the church’s patriarchal choir, in other events was “impossible,” while an Orthodox interpreter would only be available during the palace and cathedral events.

Pope Francis will meet Prime Minister Boyko Borissov and President Rumen Radev during the three-day pilgrimage, which will include an interfaith peace vigil in the capital’s Independence Square and stopover at a refugee camp. The itinerary features an outdoor Mass in Sofia’s Battenberg Square, and a visit to Rakovski, a largely Catholic town in central Bulgaria.

In an April 4 interview with Bulgaria’s Nova TV, the Orthodox Metropolitan Antony, metropolitan of Western and Central Europe, said there was “no tension” over the visit between the churches.

Another Orthodox theologian, Deacon Ivan Ivanov, told the Dnevnik daily April 5 that the decision on a religious boycott had been made at the start of preparations for the papal visit.

He added that Bulgarian Orthodox leaders appreciated the pope’s dialogue with Muslims and “cooperation in social activity, theological dialogue and diplomacy” with Orthodox leaders, as well as his opposition to abortion and defense of women, children, the poor and socially excluded.

“We have done many useful things with Catholics, such as in the care of overseas dioceses, mixed marriages and theological scientific cooperation,” Deacon Ivanov said.

“But it should be noted the pope always respects requirements in the respective host country, in this case from the Bulgarian Orthodox Church, and this is reflected in the relevant visit protocols.”

After he leaves Bulgaria May 7, Pope Francis will visit neighboring North Macedonia, which declared independence from the former Yugoslavia in 1991.

NEXT: Humanity’s ancestors: Lucy, Toumai and the evolving journey of prehumans