Humanity’s ancestors: Lucy, Toumai and the evolving journey of prehumans 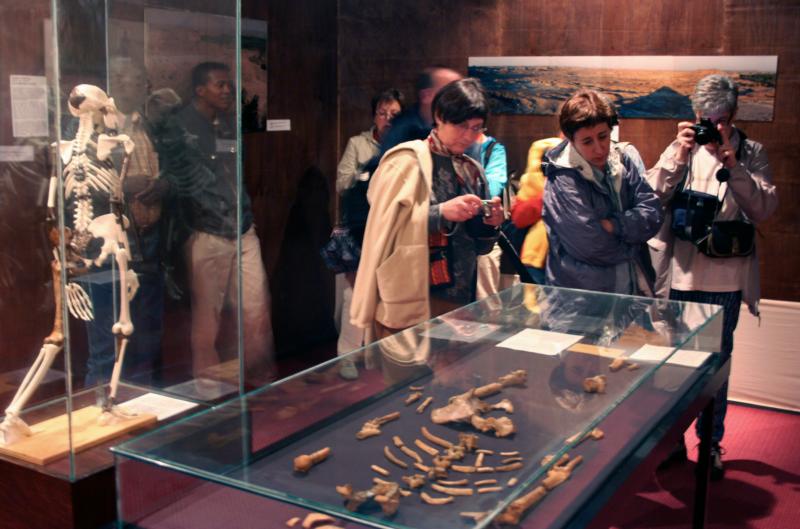 A group of Spanish tourists view a replica and reconstruction of the remains of a more than 3-million-year-old female hominid known as Lucy at the National Museum in Addis Ababa, Ethiopia, Aug. 7, 2007. (CNS photo/Barry Malone, Reuters)

VATICAN CITY (CNS) — As a follow-up to a 2013 symposium on the origin and evolution of humans, the Pontifical Academy of Sciences held a workshop discussing the latest discoveries about humanity’s earliest ancestors — where they lived and what they may have looked like millions of years ago.

This gathering, however, was taking “a different approach by inviting the discoverers themselves” to tell the academy about their historic findings and the new questions emerging from these new discoveries, said Yves Coppens, a French anthropologist and member of the papal academy who helped organize the workshop at the Vatican April 12-13.

Coppens was involved with the 1974 discovery in Ethiopia of Lucy, the 3.2-million-year-old partial skeleton of a female hominin — a “prehuman” or human-like species.

She now seems young, compared to Toumai, the nickname for a 7-million-year-old small cranium unearthed in Chad in 2001 by Michel Brunet, who told the academy that Toumai is — for now — probably the earliest known member of the human family.

With these and so many more ancient ancestors being found in Africa, “we are all African and we are all migrants out of Africa,” he said.

But this journey of primates diverging, splitting off, going extinct and eventually evolving into human beings is not a straight line, Brunet said.

“It is like a tree with a lot, a lot of branches” of many different prehuman species, he said, who, with their various body shapes and characteristics, still walked upright, could climb trees, ate a variety of foods and eventually expanded beyond Africa.

Brunet said new branches of distant and close ancestor species will keep being discovered, while only the human species has survived.

Msgr. Fiorenzo Facchini, professor emeritus of anthropology at the University of Bologna, told Catholic News Service these scientific studies and discoveries of the past touch on “fundamental questions” about the origins of humanity and its relationship with the rest of creation.

Catholic teaching says God created all things from nothing, but it doesn’t say how, which leaves open the possibilities of evolutionary mechanisms like random mutation and natural selection, said the priest, who also taught paleoanthropology and paleobiology.

St. John Paul II said faith in God the creator and a “correct teaching of evolution” are not at odds, and, “evolution, in fact, presupposes creation.”

What is beyond the field of science, Msgr. Facchini said, is the “ontological leap” of understanding human transcendence and the “instantaneous” existence of the human soul. At some point in evolution, perhaps with the emergence of “Homo habilis” or later, this being “was in some way prepared to receive the spirit.”

With the gifts of free will, self-consciousness and intelligence, human beings also have the unique duty of being responsible for their actions and for the care of creation, he said.

Martin Pickford, a paleoanthropologist and professor of prehistory at the College de France, told CNS another unique thing about humans is “we are the only animal that lies and can detect a lie, potentially.”

Some animals may “deceive” through camouflage or by mimicking another animal, but they are seeking to fool a predator and they are “misleading a different species. Humans are the only ones fooling members of their own species to get an advantage,” he said.

Pickford and Brigitte Senut, who spoke at the workshop, discovered Orrorin, a 6-million-year-old hominid species in Kenya.

Pickford said science and evolution are not in competition with religion.

With science “you must question everything, go out and find out for yourself, ask questions, demand evidence and I see the evidence of evolution around me every day.”

While religion can be used as a political tool, to “structure society” or guide people in the way they treat others, he said he believes “we all have a religious sense” that comes from a “sense of awe about nature,” and that sensibility can be encouraged or left to wither.

PREVIOUS: Bulgarian Orthodox: No common prayer for their clergy during papal visit