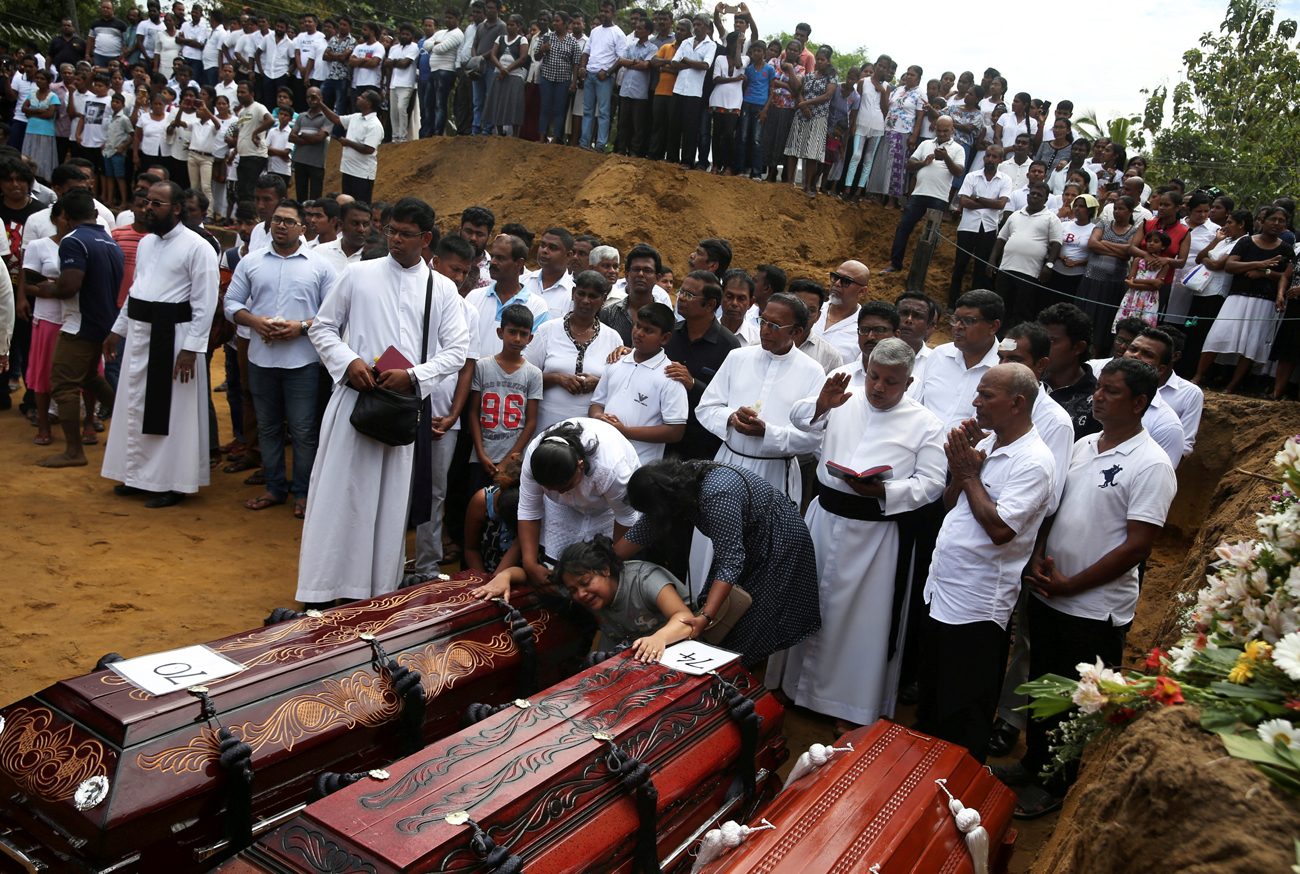 A woman mourns over caskets during a mass burial in Negombo, Sri Lanka, April 23, 2019, two days after a string of suicide bomb attacks on churches and luxury hotels across the island. (CNS photo/Athit Perawongmetha, Reuters)

BANGKOK (CNS) — Sri Lankan Cardinal Malcolm Ranjith said he is struggling following the Easter bombings in his country “because there are no words with which I can console my people.”

“I don’t know what to say to them. I try. I tried to go to their funerals and I tried to embrace them and tell them I am with them, but I have no words to say. I am suffering with them,'” he told Canadian Broadcasting Corp. Radio as the death toll from attacks continued to rise. By April 24, more than 350 people — including 45 children — were confirmed dead and 500 others injured.

A national day of mourning was held April 23 when the burials of the dead began.

Cardinal Ranjith also continued his criticism of the Sri Lankan government’s failure to heed the warnings about the attacks, claiming he would have canceled all Holy Week services had he been told. Indian security officials said they issued three warnings to their southern neighbor, one only an hour before six bombs were detonated across the island nation.

“It’s absolutely unacceptable behavior on the part of these high officials of the government, including some of the ministry officials,” Cardinal Ranjith told CBC Radio.

“I was shocked to hear the interview with (Defense Secretary Hemasiri Fernando), who sort of, you know, answered the questions in a slipshod manner, as if he has not felt any responsibility, any weight of what has happened to our people.” 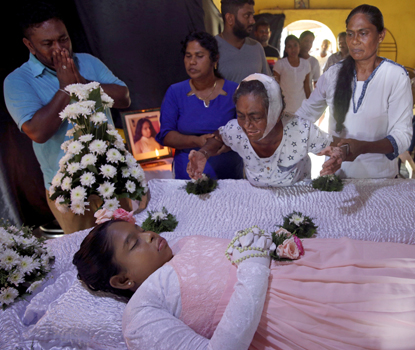 The injured grandmother of Shaini, 13, who died as bomb blasts ripped through churches and luxury hotels on Easter, mourns at her wake in Negombo, Sri Lanka, April 22, 2019. (CNS photo/Athit Perawongmetha, Reuters)

Sri Lankan Police Chief Pujuth Jayasundara issued a warning about the organization carrying out suicide bombings of prominent churches 10 days before the attacks, reported Agence-France Presse. It was unclear what action security forces had taken ahead of Easter in response.

Sri Lankan Prime Minister Ranil Wickremesinghe claimed he and other top government officials were not told and has said “we must look into why adequate precautions were not taken.”

The government confirmed April 24 that nine suicide bombers, including one woman, were involved and said it had arrested 40 people.

On April 23, Islamic State claimed responsibility for the attacks, but the claim has still not been confirmed. One video showed the bombers pledging allegiance to the jihadist group.

The government named two Islamic extremist groups, Jammiyathul Millathu Ibrahim and National Thowheeth Jama’ath, for the attacks that targeted three churches and three luxury hotels across the country, and authorities said they believe the bombers had help from offshore, a theory backed by experts. Authorities also said that it appeared that the radical groups responsible were planning a second wave of attacks.

The Indian bishops’ conference announced it would hold a day of prayer April 28, Divine Mercy Sunday, “to pledge our closeness and solidarity with the victims of the multiple bomb blasts.” They said Masses and prayer services would help draw “the attention of our people to the gruesome tragedy occurred in our neighboring country.”

The violence was the deadliest Sri Lanka had seen since a 26-year civil war ended in 2009.

The majority of those killed and injured were Sri Lankan nationals, many of whom were attending church services. The government said those killed included at least 39 foreign nationals from the United States, United Kingdom, India, China, Japan, Australia, Turkey, Australia and other European countries.

Christians make up about 6%, or about 1.5 million, of Sri Lanka’s population of 22 million, according to the country’s 2012 census. About 85% of Christians are Catholic. The majority of the population, about 70.2%, is Buddhist, while Muslims make up 9.6% and Hindus 12.6% of the population.

Pope Francis used his Easter Mass at St. Peter’s Basilica at the Vatican to express his “loving closeness to the Christian community, targeted while they were gathered in prayer, and all the victims of such cruel violence.” He also prayed for them on Easter Monday.

Bishops’ conferences around the world, including those in the United States, Australia, Pakistan and Indonesia, extended their sympathy.

Damien Kingsbury, professor of international politics and a Sri Lankan expert at Deakin University in Melbourne, Australia, said there has been no history of Islamic terrorism in Sri Lanka. National Thowheeth Jama’ath surfaced on only on a few occasions in recent years in relation to hate speech and property-related attacks on Buddhist temples, he said.

“It’s likely that recent return of Islamic State fighters to Sri Lanka had strengthened their resolve,” Kingsbury told Catholic News Service. Earlier in April, the Sri Lankan government had identified a number of Sri Lankans who had returned to the country following the collapse of the so-called IS caliphate in Syria.

Experts noted that the precise coordination — six explosions went off within 20 minutes of each other — and the number of sites chosen for attack echoed the 2008 Mumbai assault on major hotels by an Islamic State-linked terrorist group.

The bombings ended a decade of relative peace in Sri Lanka, a country with a long history of battling terrorism during civil war between government forces and the Liberation Tigers of Tamil Eelam.

NEXT: ‘Super-dicastery’ at Vatican would emphasize evangelization