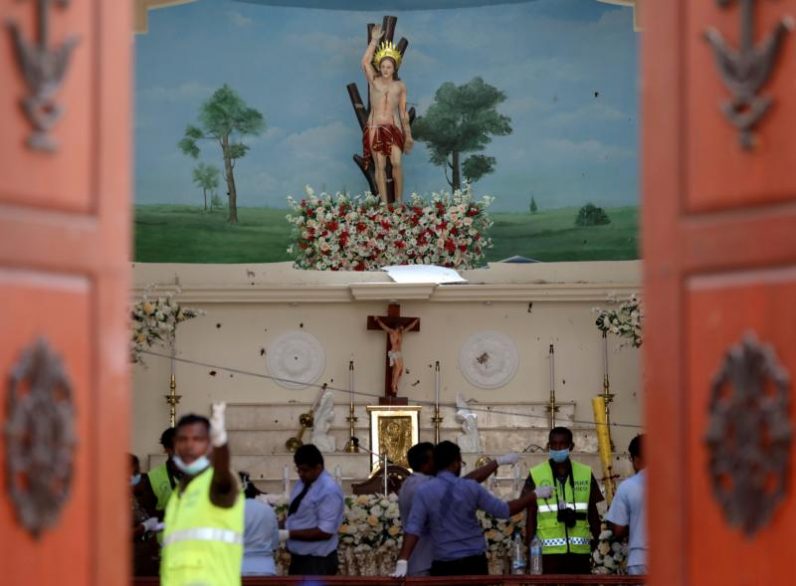 VATICAN CITY (CNS) — On Easter Monday, Pope Francis led thousands of people in St. Peter’s Square in praying for the hundreds of people who died or were injured in bomb blasts the previous day in Sri Lanka.

Pope Francis told the crowd gathered in St. Peter’s Square for the “Regina Coeli” prayer April 22, “I want to again express my spiritual and paternal closeness to the people of Sri Lanka.”

“I pray for the numerous victims and injured,” he said, “and I ask everyone not to hesitate to offer this dear nation all the necessary help. I also hope that everyone will condemn these terrorist acts, inhuman acts, that are never justifiable.”

In his main talk, the pope said that, like the women who first told the disciples that Jesus had risen from the dead, all Christians are called to encounter the risen Lord and share the good news of his resurrection with the world.

The day’s Gospel reading, like other accounts of the resurrection, highlights the role of the women who followed Jesus, he said.

“All the Gospels stress the role of the women — Mary Magdalene and the others — as the first witnesses of the Resurrection,” the pope said. “The men, fearful, were closed in the Upper Room.”

The Gospel reading (Mt 28:8-15) recounts how “the women, full of fear and joy, were rushing to go bring the news to the disciples that the tomb was empty,” the pope said. “At that moment, Jesus presents himself to them. ‘They approached, embraced his feet, and did him homage.'”

“They touched him,” he said. “It was not a ghost. It was Jesus, alive, in the flesh. It was him. Jesus drives fear from their hearts and encourages them to proclaim to the brothers what happened.”

In Jesus, the pope said, all who have been baptized pass from death to life, “from slavery to sin to the freedom of love.”

The church celebrates Easter for an entire week, he said, because it is a time to allow oneself to be “touched by the consoling message of Easter and wrapped in its glorious light, which dissipates the darkness of fear and sadness.”

The risen Lord walks alongside all those who call upon him and love him, the pope said. He is present, “first of all in prayer, but also in simple joys lived with faith and gratitude” when people are enjoying friendships, welcoming others or contemplating nature.

“Christ’s resurrection was the most shocking event in human history,” the pope said. It attests to “the victory of God’s love over sin and death, and it gives our hope for life a foundation solid as a rock.”

PREVIOUS: Sri Lankan attacks are the latest in series of Easter-related incidents

NEXT: Cardinal criticizes Sri Lankan government for not taking precautions