Churches have been targets of attack in South Asia, Southeast Asia 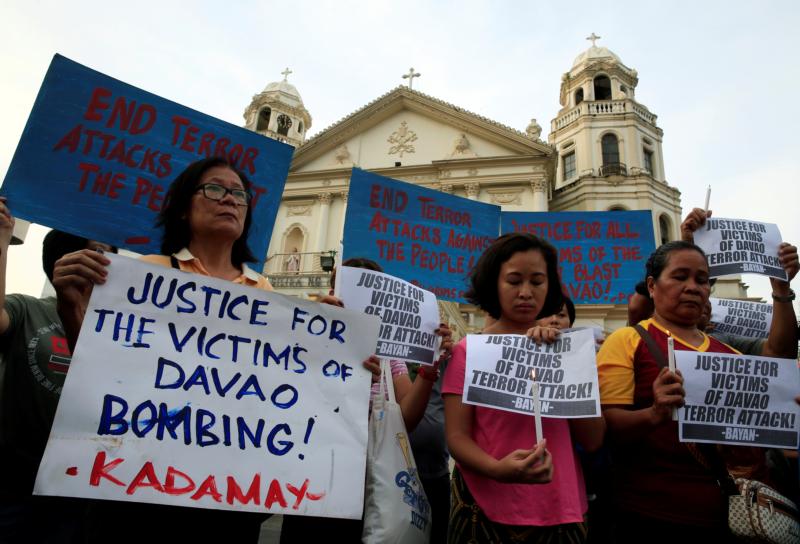 Filipino women hold placards during a Sept. 3, 2016, protest in Manila condemning the bombing at a market in Davao. Experts cite a heightened danger for more than 150 million Catholics and other Christians across South and Southeast Asia following the April 21, 2019, Easter bomb attacks that killed more than 250 people and injured 500. (CNS photo/Romeo Ranoco, Reuters)

BANGKOK (CNS) — Several experts believe the threat to churches in South and Southeast Asia has increased following the Easter bomb attacks that killed more than 250 people and injured 500.

Churches in those regions — which have 150 million Catholics and other Christians — have been the focus of attacks in a growing number of countries in recent years, including fatal bomb attacks on churches in the Philippines and Indonesia by Islamic radicals in the past 12 months.

Authorities in Sri Lanka and Australia have confirmed the Sri Lanka attackers had links to Islamic State, which claimed credit for the attack. Militant preacher Zahran Hashim, who authorities believe died as one of the suicide attackers at the Shangri-La Hotel, has been named the founder and leader of the now banned National Thowheeth Jama’ath group responsible. DNA tests are being undertaken to confirm this.

“Radical Islamic groups, some affiliated with larger extremist networks, have been quietly gaining influence in an arc of countries extending from the Maldives to the Philippines archipelago, and the threat they pose can no longer be ignored,” Brahma Chellaney, professor of strategic studies at the New Delhi-based Centre for Policy Research, wrote for his widely distributed Project Syndicate column.

“In fact, the grisly Sri Lankan bombings are a reminder that Asia — not the Middle East — is the region most afflicted by terrorist violence.”

The prognosis comes as the so-called Islamic State has splintered and gone back underground following the defeat of its caliphates in Iraq and Syria as well as the continued operation of other terrorist groups linked to al-Qaida in the region.

“In the wake of the Sri Lanka attacks, Indonesia needs to be particularly alert to the increased role of pro-ISIS women; possibly enhanced attraction of churches as targets; and the possibility of someone with international jihad experience entering the country,” said Sidney Jones, director of the Jakarta-based Institute for Policy Analysis and Conflict. The group published a report on the Ongoing Problem of pro-ISIS cells in Indonesia April 29.

Jones said that while authorities in Indonesia, the world’s most populous Muslim country, appeared to have the terrorist threat reasonably under control, it was possible for some groups to slip through the cracks as they had done in the May 2018 deadly church bombings at Surabaya.

But she added that it was “hard to think of any government in the region that would be as lax as Sri Lanka. Southeast Asian governments with large Muslim populations are particularly vigilant; China, of course, is turning Xinjiang into a technological state-of-the-art detention center for Uighurs.”

Jones told Catholic News Service she believed that “the added significance of churches is just for pro-ISIS groups, not al-Qaida. They’ve been recirculating the ideological justification that appeared in a number of IS magazines in recent years.”

Church services were canceled across Sri Lanka the weekend of April 28 and churches were closed indefinitely as a precautionary measure. On April 26, Cardinal Malcolm Ranjith of Colombo told reporters that church officials had seen a leaked security document describing Roman Catholic and other churches as major targets.

But on April 28, people in Colombo prayed outside St. Anthony’s Shrine, one of the attacked churches that suffered significant damaged. Authorities also tried to persuade Muslims to refrain from traditional Friday prayer services on April 26, but some were open and, like all religious sites in Sri Lanka, are now subject to heavy security.

On April 29, the Sri Lankan authorities banned the burqa, a Muslim female face covering, a move it has been mulling since the attacks. Such a move has not prevented ongoing attacks in other nations, such as France, where it has been instituted.

“We now have info that there are about 140 people in Sri Lanka linked to the Islamic State. We can and we will eradicate all of them very soon,” President Maithripala Sirisena said.

Chellaney noted that Muslim militants who had returned from fighting for Islamic State and other groups in Syria and other part of the Middle East are present in a range of Asian counties “from the Philippines and Indonesia to the Maldives and Uzbekistan.”

He likened the current situation to that of three decades ago when Osama bin Laden and other al-Qaida leaders emerged after cutting their teeth in the U.S.-backed war against the Soviet occupation of Afghanistan.

“This new generation of jihadi veterans could haunt the security of Asia, the Middle East and the West for years to come,” he said.

Still, Jones said that while she could not “speculate on the role of returnees, in Indonesia, the biggest danger is from those who never left, not those coming back.”

She believes the biggest danger will come, like in Sri Lanka, from small groups. “These groups by and large come together with little vetting, training, indoctrination, weapons or experience. What they have in unlimited quantities is zeal and a desire for recognition.”

PREVIOUS: A look at the College of Cardinals after Polish cardinal’s 80 birthday