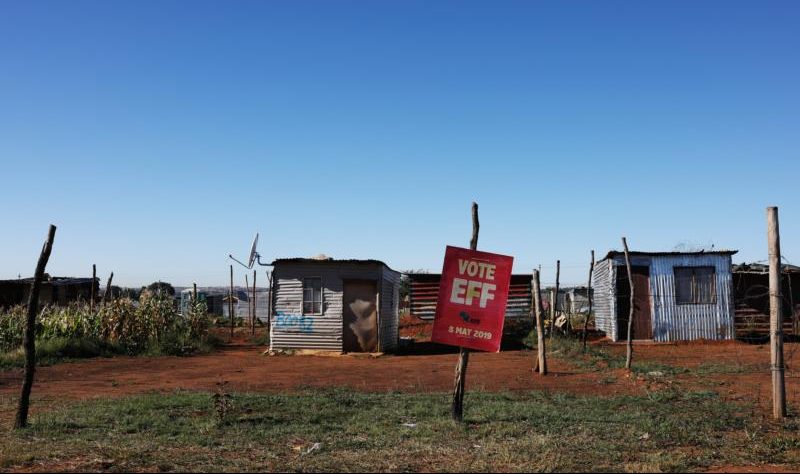 An Economic Freedom Fighters election poster hangs in front of homes outside Johannesburg, South Africa, April 17, 2019. Archbishop Buti Tlhagale of Johannesburg criticized shameless physical attacks on migrants and refugees based on spurious allegations that they have robbed South Africans of their jobs. (CNS photo/Siphiwe Sibeko, Reuters)

CAPE TOWN, South Africa (CNS) — A South African archbishop has urged the government to act against xenophobic attacks, which have increased as general elections approach.

“A fallout between South Africa and other African countries can only have disastrous consequences, hence the urgent need to dissipate tensions,” Archbishop Buti Tlhagale of Johannesburg said in a late-April statement.

“If the unwarranted violent attacks on migrants and refugees are not brought to a halt, South Africans run the risk of becoming like the oppressors of the apartheid era,” Archbishop Tlhagale said.

South Africa marked the 25th anniversary of the end of white-minority rule April 27. Warnings of protests against the employment of foreign nationals have been spread around South Africa in the run-up to the May 8 election.

Noting that young people have always been “in the forefront of the struggle for justice” and that the “attacks on migrants and refugees are reprehensible acts of injustice,” Archbishop Tlhagale said young South Africans’ “silence is deafening.”

Young people’s “prophetic voices appear to have been muted at a time when their support and solidarity” would make a significant difference to oppressed migrants, he said.

After about 300 migrants, mostly Malawian, were displaced in attacks in Durban late March, South African ministers held emergency talks with diplomats of other African countries in the capital, Pretoria.

“The shameless physical attacks on migrants and refugees on spurious allegations that they have robbed South Africans of their jobs is simply disgraceful,” Archbishop Tlhagale said, noting that with few or no arrests, “the victims do not get to see justice being done.”

“Migrants bring skills into the economy” and their contribution to South Africa is significant, he said.

“These attacks are patently fueled by anti-foreigner sentiment” and cannot “be reduced to hooliganism,” the archbishop said.

“Foreign governments expect the South African government to quell and diffuse” such “xenophobic attacks,” he said.

Xenophobic attacks are sometimes linked to protests about “lack of clean water, electricity, housing” and other grievances, he said. “The anger and frustration of the local people at government’s empty promises have tended to engulf migrants who live in the same neighborhood as the protesters.”

There are about 3 million immigrants in South Africa, which has a population of 57 million and is the most developed sub-Saharan economy.

PREVIOUS: Churches have been targets of attack in South Asia, Southeast Asia

NEXT: Vatican newspaper appoints new editorial board for women’s magazine