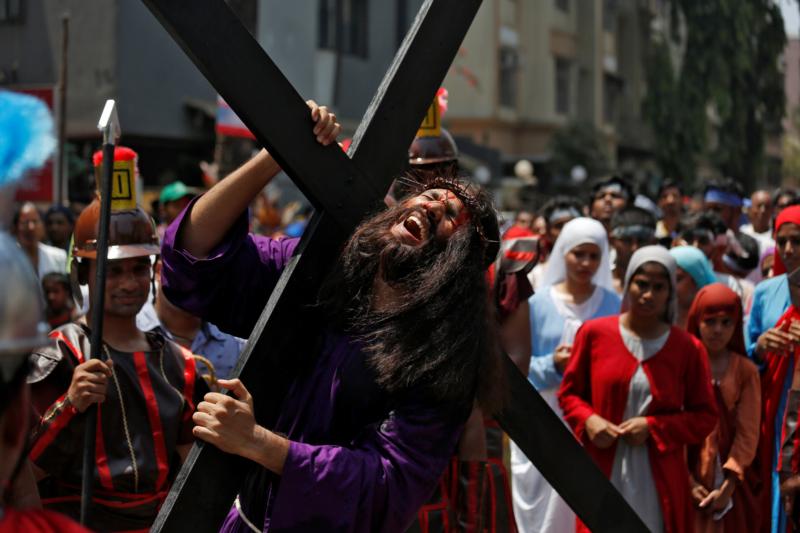 A man portraying Jesus carries a cross while performing a re-enactment during a Good Friday procession in Mumbai, India, March 30, 2018. The Mumbai high court reinstated Good Friday as a holiday after it had been removed from the list of government-approved holidays in an area in western India ruled by the federal government. (CNS photo/Francis Mascarenhas, Reuters)

THRISSUR, India (CNS) — The Mumbai high court reinstated Good Friday as a holiday after it had been removed from the list of government-approved holidays in an area in western India ruled by the federal government led by the Hindu nationalist Bharatiya Janata Party.

“We are very happy to inform you that we have won the Good Friday battle in the Mumbai high court,” Auxiliary Bishop Theodore Mascarenhas of Ranchi, secretary general of the Indian Catholic bishops’ conference, said in a statement after the court’s April 15 ruling.

Bishop Mascarenhas called the ruling “a big relief” for the Christian minority in the region. “The court order reinforces our faith in the judicial system,” he told Catholic News Service.

Federal government leaders in the Union Territories of Dadra and Nagar Haveli and Daman and Diu had determined that beginning this year, Good Friday, which falls on April 19, would cease to be a compulsory holiday. The government’s stance meant that public institutions, including schools and colleges, would have remained open on one of the holiest days in the Christian calendar.

The territories were a Portuguese colony for 450 years before becoming part of the Indian union in 1961. Ecclesiastically, the area falls under the Archdiocese of Goa that covers the tiny state of Goa, which was part of the Union Territory until becoming a state in 1987.

“The Christian community and the citizenry at large in these (areas) were pained and anguished by the cancellation of a holiday on Good Friday which is held sacred by them,” the bishops’ conference said in commending the court’s ruling.

Despite the court verdict, a round of parliamentary elections set in 13 states for April 18 — Holy Thursday — will go ahead as planned despite appeals from Christians and the bishops’ conference to the Election Commission of India and federal officials that they be rescheduled.

During the five-year tenure of the outgoing BJP government, several efforts have been made to turn Christmas and Good Friday (public holidays in India) into “working days” in parts of states or departments controlled by the federal government.

In each case, Christian protests and court orders led to the reinstatement of the Christian holidays.