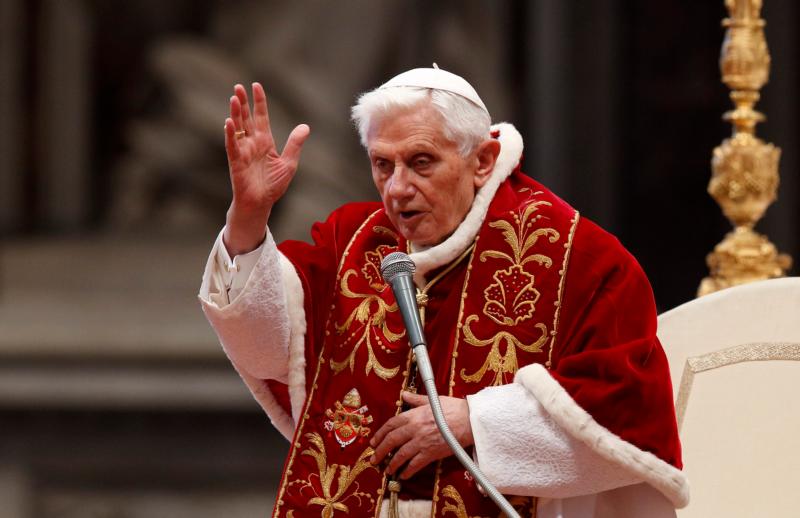 Pope Benedict XVI delivers a blessing at the conclusion of a Mass for the Knights of Malta in St. Peter’s Basilica at the Vatican Feb. 9, 2013, two days before he announced his resignation. The retired pope marks his 92 birthday April 16. (CNS photo/Paul Haring)

VATICAN CITY (CNS) — Marking retired Pope Benedict XVI’s 92nd birthday, the editorial director of the Vatican Dicastery for Communication insisted what the retired pope wrote about facing the clerical sexual abuse crisis is essentially what Pope Francis has said, too.

“Celebrating Joseph Ratzinger’s birthday, it can be useful to underline the approach that both Benedict XVI and his successor, Francis, have maintained in the face of the scandals and the abuse of minors,” Andrea Tornielli, the editorial director, wrote.

The approach of the two popes, he said in an April 15 article, cannot be “reduced to a slogan.”

The retired pope’s birthday is April 16 and just five days earlier, several media outlets published what Pope Benedict described as “some notes” that could help Catholics understand and address the abuse crisis.

For both the pope and retired pope, Tornielli wrote, it is not enough for the church to trust new emergency norms, “although necessary,” or the “indispensable” formulation of “more detailed and precise protocols for guaranteeing the safety of children.”

The response of Pope Benedict when he was pope and Pope Francis now, he said, “is a profoundly and simply Christian response” that insists all efforts to respond to the crisis must be supported by prayer and true penance.

Tornielli did not go into the retired pope’s explanation that the roots of the abuse crisis were to be found in the cultural and sexual revolution of the 1960s and in a progressive loss of certainty about right and wrong.

Instead, Tornielli focused on Pope Benedict’s insistence that “we do not need another church of our own design,” but rather repentance and a renewal of faith.

The sentiment, he said, is not new. Already in his 2010 letter to the people of Ireland in response to the abuse crisis, Pope Benedict had written that, “in order to recover from this grievous wound, the church in Ireland must first acknowledge before the Lord and before others the serious sins committed against defenseless children. Such an acknowledgement, accompanied by sincere sorrow for the damage caused to these victims and their families, must lead to a concerted effort to ensure the protection of children from similar crimes in the future.”

“In confronting the present crisis, measures to deal justly with individual crimes are essential,” Pope Benedict had written, “yet on their own they are not enough: a new vision is needed, to inspire present and future generations to treasure the gift of our common faith.”

The call to prayer, fasting and penance, Tornielli said, is not an attempt to place blame outside the church, but is a recognition that “the strongest attack comes from internal enemies and from sin in the church.”

Pope Francis, too, he said, has urged all Catholics to set off on “a penitential path, far from any triumphalism — as he said in his Palm Sunday homily — and from the image of a strong and prominent church that tries to hide its weaknesses and sin. It’s the same proposal his predecessor makes.”