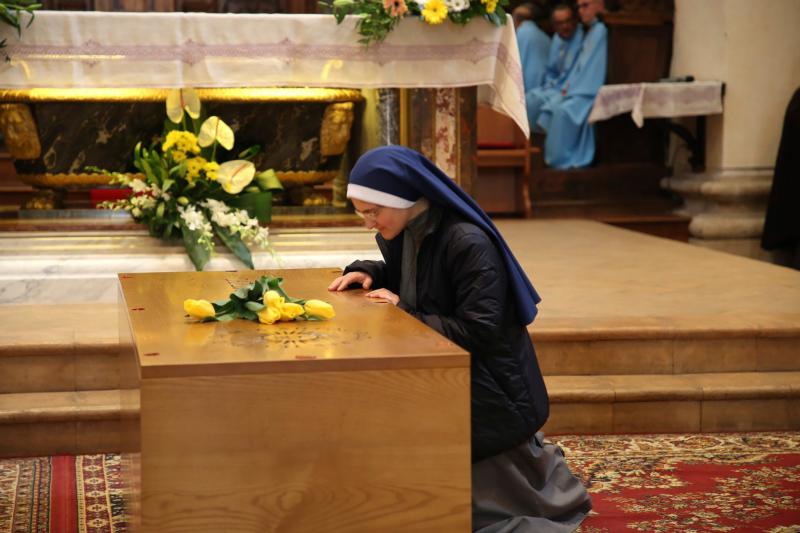 A nun prays at the coffin of Venerable Carlo Acutis, who died of leukemia in 2006 at the age of 15, during the transfer of his remains to their new resting place in the Shrine of the Renunciation in Assisi, Italy, April 6, 2019. Venerable Acutis was noted for being a computer whiz with a zeal for the Gospel. (CNS photo/courtesy Assisi Diocese)

VATICAN CITY (CNS) — In his recent apostolic exhortation, Pope Francis told young men and women that they did not need to look far for role models who avoided the traps of “self-absorption, isolation and empty pleasure” that abound in the digital age.

The life of Venerable Carlo Acutis, a 15-year-old Italian teenager on the road to sainthood, showed that young people could use the power of social networking and communications with “creativity and even genius,” the pope said in his exhortation “Christus Vivit” (“Christ Lives”).

“Carlo was well aware that the whole apparatus of communications, advertising and social networking can be used to lull us, to make us addicted to consumerism and buying the latest thing on the market, obsessed with our free time, caught up in negativity,” the pope said. “Yet he knew how to use the new communications technology to transmit the Gospel, to communicate values and beauty.”

“He learned on his own how to animate 3D cartoons on a computer. He never even took a course on how to use Photoshop. He would sit on his bed, download instructions on the internet and he was able to understand all these computer programs. It took me years to learn Photoshop and I still haven’t learned!” Antonia Salzano, Acutis’ mother, told Catholic News Service April 10.

Acutis liked making short videos. One was an explanation of transubstantiation in layman’s terms. Another was an homage to the opening crawl of “Star Wars,” complete with a starry background, scrolling text and John Williams’ famed score.

Yet even as a child, there were some sparks of holiness that his own mother thought were “a bit out of the ordinary.”

“I would never hear him criticize anyone, I never heard him complain, always attentive to any person,” Salzano said. “Many people would say that when they would greet him, it would tug at their heartstrings.”

Pope Francis noted that young Carlo avoided the trap many young people fall into when influenced by social networks and mass media.

“He saw that many young people, wanting to be different, really end up being like everyone else, running after whatever the powerful set before them with the mechanisms of consumerism and distraction,” the pope said. “As a result, Carlo said, ‘Everyone is born as an original, but many people end up dying as photocopies.’ Don’t let that happen to you!”

Salzano told CNS that while the pope quoting her son “was something that filled us with joy,” it was also a call to spread the example of the young teen’s life to show others that being holy and maintaining one’s originality “isn’t that hard of a goal to obtain.”

“It is enough to put God at the center of one’s life like Carlo did. Carlo led a normal life: He went to school, he played sports, he played video games, although usually just one hour a week because he understood that one could be enslaved by video games,” she said.

Yet, his zeal for spreading the message of the Gospel wasn’t limited to the digital sphere, Salzano recalled. He would help his peers who were bullied at school and save up his money to buy sleeping bags, food and hot beverages for poor people living on the streets of Milan.

Acutis also held a special place in his heart for migrants, his mother said. “Here in Milan, there are many from Asia, India and Africa. Carlo would make friends with all of them, whether they were Muslim, Hindu or Buddhist.”

In 2018, five years after the introduction of his sainthood cause, Pope Francis recognized that Acutis lived the Christian virtues in a heroic way and declared him venerable.

As part of the canonization process, Acutis’ body was exhumed and transferred to a place suitable for public veneration, the Shrine of the Renunciation at the church of St. Mary Major in Assisi.

The shrine, dedicated in April 2017, is the site where a young St. Francis of Assisi renounced all claims to his father’s inheritance and embraced poverty.

In a letter sent on the occasion of its dedication, Pope Francis said the Shrine of the Renunciation was a “precious place where young people can be helped in the discernment of their vocation.”

For Salzano, it wasn’t a coincidence that her son is now buried at the place where “St. Francis began his own journey toward sainthood.”

“Carlo was young and like St. Francis, Carlo had his journey, a journey that we are all called to make, especially young people, to begin placing God in the first place in our lives,” Salzano told CNS.

“I hope that the fact that Carlo is buried there may be a sign of hope for these young people,” Salzano said. “And more importantly, that it would encourage us to bring forward the extraordinary plan that God has for each and every one of us.”

NEXT: Human trafficking is ‘crime against humanity,’ pope says