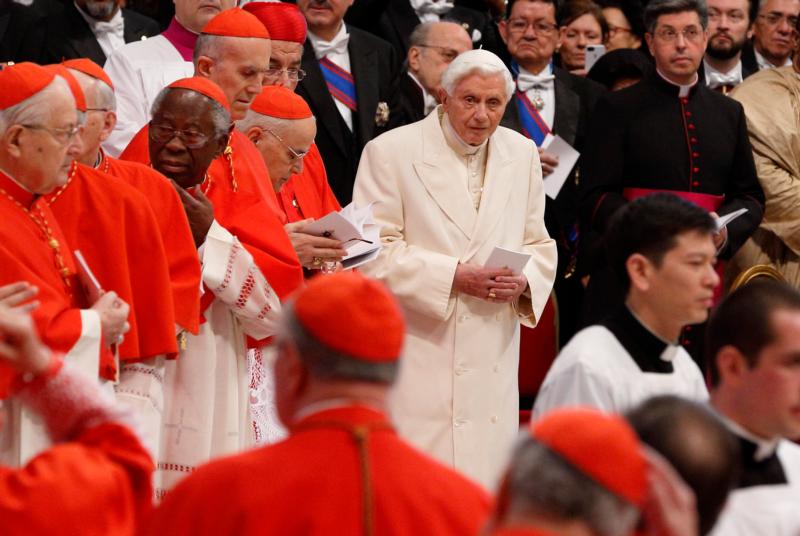 Retired Pope Benedict XVI attends a consistory for the creation of new cardinals in St. Peter’s Basilica at the Vatican in this Feb. 22, 2014, file photo. Pope Benedict has released an article addressing the roots of the clerical sexual abuse crisis in the Catholic Church and how the church should respond now. (CNS photo/Paul Haring)

VATICAN CITY (CNS) — Retired Pope Benedict XVI, acknowledging his role in helping the Catholic Church come to terms with the clerical sexual abuse crisis beginning in the 1980s, wrote an article outlining his thoughts about what must be done now.

Seeing the crisis as rooted in the “egregious event” of the cultural and sexual revolution in the Western world in the 1960s and a collapse of the existence and authority of absolute truth and God, the retired pope said the primary task at hand is to reassert the joyful truth of God’s existence and of the church as holding the true deposit of faith.

The pope’s remarks, presented as a compilation of “some notes,” were to be published in Klerusblatt, a German-language Catholic monthly journal for clergy in Bavaria. Several news outlets released their translations of the text early April 11.

Given the February Vatican gathering of presidents of the world’s bishops’ conferences “to discuss the current crisis of faith and of the church,” and given his role as pope during “the public outbreak of the crisis,” the retired pope felt it appropriate he also help contribute “to a new beginning,” he said.

Pope Benedict added that he contacted Pope Francis and Cardinal Pietro Parolin, Vatican secretary of state, before releasing the article.

The retired pope, who turns 92 April 16, led the universal church from 2005 to 2013 and for 23 years before that headed the Congregation for the Doctrine of the Faith, which is charged with handling cases of the abuse of minors by priests. He also served as a theological consultant during the Second Vatican Council, between 1962 and 1965.

Beginning in the late 1960s, while Western society at large was facing the “death” or disappearance of God and any moral compass, he said, the church’s own moral theology suffered “a collapse that rendered the church defenseless against these changes in society.”

A misreading of the Second Vatican Council, he said, shifted the church’s understanding of revelation, resulting in a diluted or shape-shifting morality that was no longer grounded in natural law and the existence of absolute good and evil; morality could only make “relative value judgments” contingent on the moment and circumstances, he wrote.

“Indeed, in many parts of the church, conciliar attitudes were understood to mean having a critical or negative attitude toward the hitherto existing tradition, which was now to be replaced by a new, radically open relationship with the world,” he wrote.

To illustrate this radical openness, he gave an example of an unnamed bishop who had been a seminary rector and “arranged for the seminarians to be shown pornographic films, allegedly with the intention of thus making them resistant to behavior contrary to the faith.”

In an extensive study on the causes and context of the abuse of minors by priests in the United States from 1950 to 2010, the John Jay College of Criminal Justice of the City University of New York found “the majority of abusers (70 percent) were ordained prior to the 1970s,” and 44 percent of those accused entered the priesthood before 1960.

Social factors influenced the increase of abuse incidents during the 1960s and 1970s, the report said, finding the increase consistent with “the rise of other types of ‘deviant’ behavior, such as drug use and crime,” and changes in social behavior such as the “increase in premarital sexual behavior and divorce.”

In another example of how Catholic tradition was being rejected and a “new, modern ‘Catholicity'” was being introduced by some bishops, who were “not only in the United States of America,” Pope Benedict cited instances of labeling seminarians “caught reading my books” as unsuitable for the priesthood. “My books were hidden away, like bad literature, and only read under the desk,” he said.

The retired pope emphasized the importance of recognizing, embracing and defending the most essential and foundational principles of faith and of protecting the authority of the church, particularly in matters of morality.

In fact, he said the original meaning behind the verse (Mk 9:42) in which Jesus says it would be better to toss out to sea, weighed down with a millstone, whoever causes “one of these little ones who believe in me to sin,” refers to those who are intellectually arrogant and cause the “little ones” — the common believer — to become confused in the faith.

While it is “not in itself wrong” to associate the verse with “pedophilic misconduct” as many do today, he said, its original meaning must not be obscured because “great goods such as the faith are equally important” and Jesus protects the deposit of faith with a strong threat of punishment to those who would do it harm.

“In the general awareness of the law, the faith no longer appears to have the rank of a good requiring protection. This is an alarming situation which must be considered and taken seriously by the pastors of the church,” he wrote.

“What must be done?” he asked.

Creating “another church” will not work because “that experiment has already been undertaken and has already failed.”

“Only obedience and love for our Lord Jesus Christ can point the way. So, let us first try to understand anew and from within what the Lord wants, and has wanted with us,” he wrote.

The scandal of child sexual abuse reached such terrible proportions, both in society and the church, he said, because of “the absence of God” and a refusal to hold him as the guiding principle.

“A paramount task, which must result from the moral upheavals of our time, is that we ourselves once again begin to live by God and unto him. Above all, we ourselves must learn again to recognize God as the foundation of our life instead of leaving him aside.”

“The crisis caused by the many cases of clerical abuse” must not lead to taking the church “into our own hands” and redesigning it.

The church is like a fishing net that catches both good and bad fish, like a field where good grain and bad weeds grow, he wrote. “The field is still God’s field and the net is God’s fishing net. And at all times, there are not only the weeds and the evil fish, but also the crops of God and the good fish.”

The idea that people can create a better church, he wrote, “is in fact a proposal of the devil, with which he wants to lead us away from the living God, through a deceitful logic by which we are too easily duped.”

“No, even today the church is not just made up of bad fish and weeds. The church of God also exists today, and today it is the very instrument through which God saves us,” he said.

PREVIOUS: Nicaraguan bishop to leave for Rome as threats against him increase