Filipinos reminded in Holy Week to reflect on Jesus’ humility 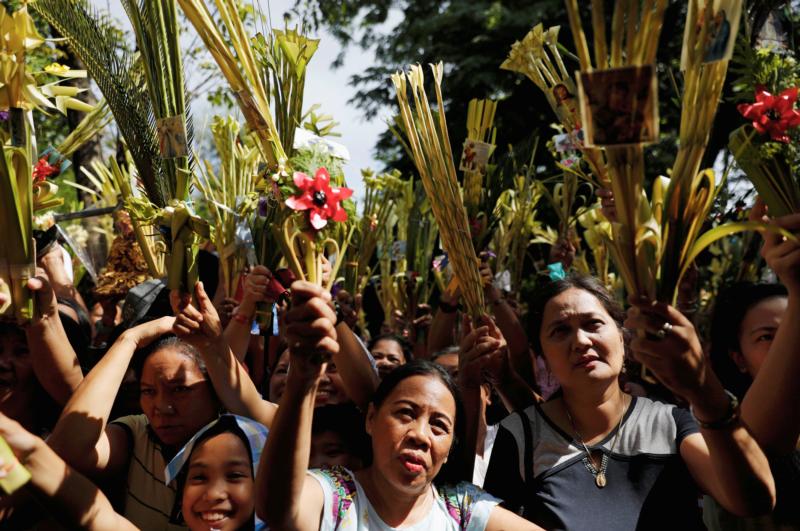 Filipinos wave palm fronds to be blessed before Palm Sunday Mass at a church in Paranaque City April 14, 2019. Church leaders in the Philippines reminded the Catholic faithful to spend Holy Week, a public holiday in the predominantly Catholic country, “to know and understand deeply the humble Messiah.” (CNS photo/Eloisa Lopez, Reuters)

MANILA, Philippines (CNS) — Church leaders in the Philippines reminded the Catholic faithful to spend Holy Week, a public holiday in the predominantly Catholic country, “to know and understand deeply the humble Messiah.”

Cardinal Luis Antonio Tagle of Manila urged Filipinos to spend the week not only as a break from work but also to reflect on the humility shown by Jesus in his suffering and death, ucanews.com reported.

“While we also get to rest during Holy Week, I hope it will not remain merely as a break or vacation rather than a time to deeply know Jesus,” he said.

“I hope those of you here will inform your children, grandkids, relatives, friends that Holy Week is a time to look at Jesus. Listen to him, allow his words, his sufferings and love to transform our whole being,” he added.

Archbishop Rolando Tirona of Caceres called for prayers during Holy Week and urged people to remember the “loving and total sacrifice of Jesus on the cross for our salvation.”

“I call on you, my dear faithful, to enter more deeply and spiritually embrace the meaning of our Lord’s Passion, death and resurrection,” he said.

In his homily during a Palm Sunday observance, Archbishop Jose Palma of Cebu also reminded the faithful that the Holy Week is a time to reflect on God’s love for people.

“Let us pray and open our hearts through our active participation in church activities because we have a lot to do,” he said.

He called on the faithful to ask for forgiveness and to receive the love of God “that will bring about change for everyone.”

Without mentioning upcoming midterm elections, Cardinal Tagle noted in his Palm Sunday message that it would seem “more attractive” for people to follow leaders “who are proud.”

“But if they become humble, will we follow because it means we would have to be humble as well?” he asked. “Look at the Messiah who is humble. Will we follow him?”

The campaign for the national and local elections in May has entered its final phase as candidates have tried to meet voters around churches during the Lenten season.

Cardinal Tagle reminded the faithful to choose to become followers of modest leaders like Jesus, even if doing so is not easy.

In the Diocese of Legazpi, south of Manila, Bishop Joel Baylon asked a worshipper during a Palm Sunday Mass to place their blessed palm fronds on their doorsteps. He said they “would serve as a true message that our votes are not for sale.”

Bishop Jose Colin Bagaforo of Kidapawan, on the southern island of Mindanao, appealed to candidates to declare a “campaign cease-fire” during Holy Week.

Father Edwin Gariguez, executive secretary of the social action secretariat of the bishops’ conference, reminded candidates and their supporters not to campaign in churches.

“Even if there is no law that prohibits it, they should be sensitive,” the priest said. “Respect the church by not campaigning in a place of worship.”

The national Commission on Elections has issued an order banning campaigning on Holy Thursday and Good Friday.

NEXT: Pope’s Way of Cross will shine light on women ‘crucified’ by traffickers