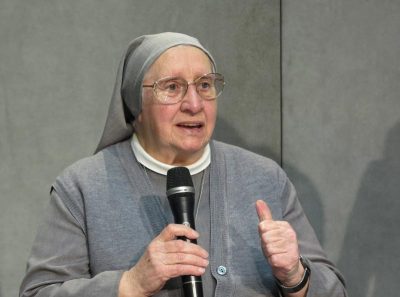 Consolata Sister Eugenia Bonetti speaks during a news conference at the Vatican April 17, 2019. Sister Bonetti has led a major international effort by religious orders to fight human trafficking and help women and girls rebuild their lives after they were tricked by traffickers into prostitution. She was asked to write the meditations for this year’s Way of the Cross at Rome’s Colosseum. (CNS photo/Carol Glatz)

VATICAN CITY (CNS) — Countless women and girls are being “crucified” by human traffickers, who trick them into slave labor or prostitution, and by those who seek out their services and exploit them, said the missionary nun who wrote the meditations for Pope Francis’ Way of the Cross service.

Victims of human trafficking are people whom “we have crucified and, today, in 2019, we continue to have people crucified for our use, our purposes, our well-being,” Consolata Sister Eugenia Bonetti told reporters at a Vatican news conference April 17.

She wanted the pope’s Good Friday ceremony, which meditates on Christ’s passion and suffering, to help people recognize “today’s passion” suffered by so many young people.

The prayers and meditations she wrote come from what she has witnessed and learned from the thousands of women and young girls she has helped over the past two decades, Sister Bonetti said; she and other religious women have ministered to sex workers along the roadsides of Italian cities, in police detention centers or in church-run safehouses, helping them get off the streets and rebuild their lives.

The service will include “heartfelt prayers that we have heard from these women and that we want to share with this world, around that cross, this Christ who dies again today on our streets,” she said.

The text, she said, will also highlight today’s “Veronicas” and “Marys” who run to be by the side of the victims and offer them comfort and prayers.

Her aim, she said, is to make people understand “that we all have a great responsibility” because if there are still modern-day slaves in the world, “we are all responsible and each one of us is called to do something, is called to really recognize the cry, the secret of these women,” because they are there because there is a demand and because of the “enormous profits” reaped from their exploitation.

“Everyone feasts on the flesh of the poor,” she said.

Thanks to her advocacy, Italy has a law that sees victims of human trafficking not as criminals but as victims of a crime and gives them a chance to obtain legal residency.

However, she added, the government is doing “much too little” to combat the sex trade “with the excuse that women are free to do what they want,” while at the same time doing nothing about the economic and social problems that push many women into “a situation where the only possibility they have is to sell their body.”

Every parishioner, parish priest, diocese and bishop must take responsibility and help “shape people’s conscience,” especially on the International Day of Prayer and Awareness Against Human Trafficking.

People must recognize how “shameful” it is that there are still so many “slaves on the streets” and “we must have the strong courage to say ‘no’ to slavery” and ask for forgiveness, she said.

For those who believe they should be free to do whatever they want with their money, she said, “No, my dear, you cannot buy a person’s dignity; it is sacred, you must respect it, you must protect it.”

NEXT: God’s glory is shown on the cross, pope says at audience