Helping others is the true goal, pope tells soccer league 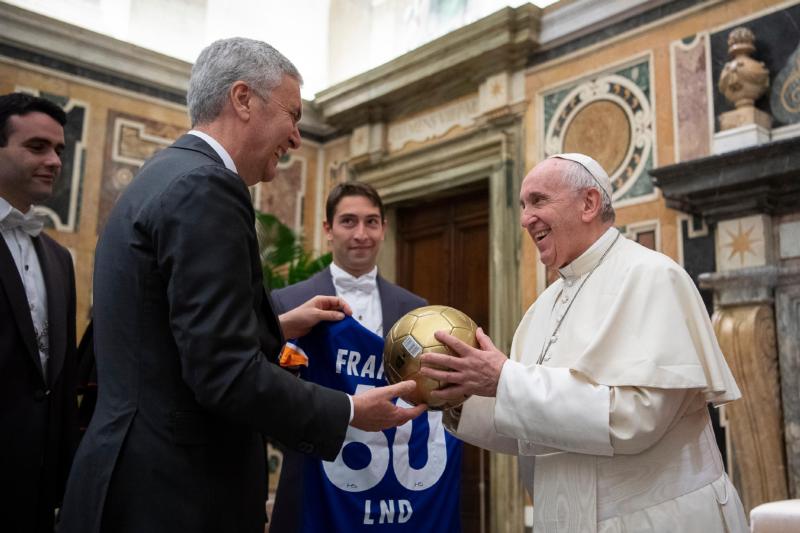 Pope Francis accepts a soccer ball during a meeting with members of the Italian National Amateur Soccer League at the Vatican April 15, 2019. (CNS photo/Vatican Media)

VATICAN CITY (CNS) — Like those who play soccer, people must learn to work together, help one another and race toward a clear goal, Pope Francis said.

While one may not always achieve every goal in his or her life, having a clear set of objectives makes people see “where are we going and where our efforts are taking us” as opposed to today’s culture which often pushes young men and women to “run without stopping,” the pope said April 15 during an audience with members of the Italian National Amateur Soccer League.

“To clarify and improve our goals is an exercise that is never-ending and carried out every day — I would say almost every moment — to become more and more aware of what we are doing and the most suitable ways to achieve the desired result,” he said.

Noting that the association will celebrate its 60th anniversary this year, the pope said it continues to “play an important role in Italian society,” and that its role in educating young men and women should be “appreciated and encouraged.”

Soccer, like all sports, he said, can play an integral part in a person’s life and teach “patience, acceptance of defeat, team spirit and a willingness to work with others.”

It also teaches the values of fair play and respect for the rules that can give players “great respect not only for your opponents but also for every person in front of you,” the pope said.

Applying those principles “requires self-control, which is obtained through inner training and the care of one’s spiritual life, as well as physical life, because each one of us is made up of a unity of body and mind, and one cannot be well if the needs of the other are neglected.”

Pope Francis also emphasized the importance of solidarity with one’s own team and community, especially reaching out to those “who have fallen or suffered a foul or limping because they have been hurt” and to respect both friend and foe.

By following those guidelines, players will understand that “the championship does not start if one is alone” and that “in our society, we can only be saved together, while we lose if we allow those who are weaker to remain on the sidelines and feel worthless.”

Jesus calls on all people to “love and do everything with a look of goodness toward people and their situations,” the pope said. “This means becoming the last one, learning to see beauty even in the smallest things and trying to accept our limits with serenity.”