Nicaraguan bishop to leave for Rome as threats against him increase 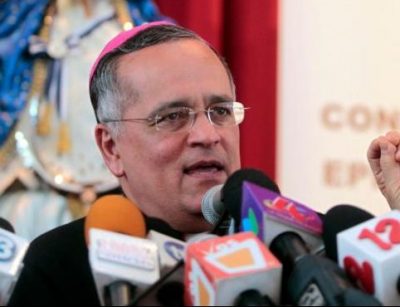 UPDATED – MEXICO CITY (CNS) — A Nicaraguan bishop said he will leave the country indefinitely as concerns for his security increase — presumably the product of his criticisms of the Central American nation’s president.

Auxiliary Bishop Silvio Baez Ortega of Managua said April 10 he would travel to Rome — at the request of Pope Francis — after finishing Easter celebrations in Nicaragua, which has convulsed with violence for more than a year. Police and paramilitaries loyal to President Daniel Ortega have crushed protests calling for his ouster, and dissidents have been forced to flee the country.

“I give thanks to Pope Francis, who, having confirmed my ministry and my style as bishop, has asked me to go to Rome for a period of time. I carry in my heart of a pastor the joy and sadness, the pain and hopes of the people of Nicaragua. Thank you all for your love!” Bishop Baez tweeted April 10.

“I can tell you with total sincerity, at this time, I am experiencing great pain in my heart, the pain of not being able to be physically in my loved Nicaraguan community,” Bishop Baez told a news conference April 10, according the newspaper La Prensa. “I have not asked to leave. The Holy Father called me.”

Bishop Baez had traveled to the Vatican April 1-8 and met privately with Pope Francis April 4. He said Pope Francis told him: “I’m interested in having you here with me, I need you right now.”

“This decision of the Holy Father, which I have accepted with complete, loving obedience, has made my heart weep.

“I am not abandoning the people of God. … I am not going to ignore Nicaragua.”

At the news conference, Bishop Baez confirmed that in June 2018 he had been warned by the then-U.S. ambassador to Nicaragua of a plan to assassinate him and other prominent people in opposition to the Ortega government.

Bishop Baez has been among the most vocal critics of Ortega and has been harassed for his outspokenness, especially on social media. La Prensa reported government workers had been forced to sign petitions to the Vatican, calling for Bishop Baez’s removal.

Nicaragua erupted in protests in April 2018 over planned reforms to the social security institute, which was to be funded with higher taxes after critics allege it was looted by corrupt officials. The protests later demanded Ortega leave office, something he refused to do.

Human rights groups say the death toll in Nicaragua topped 300 in 2018, and they accused police and paramilitaries of using lethal force on protesters.

Nicaragua’s Catholic Church has attended to injured protesters and lent spiritual support to those opposing the government. This has put the church in the line of fire; parishes have come under attack and churchmen, including Bishop Baez, have been pummeled by pro-government individuals.

The Nicaraguan bishops’ conference has attempted to promote a peaceful exit to the political unrest by promoting a national dialogue. They withdrew from the process, however, saying conditions did not allow for a peaceful solution. Others in opposition accused the Ortega regime of negotiating in bad faith.